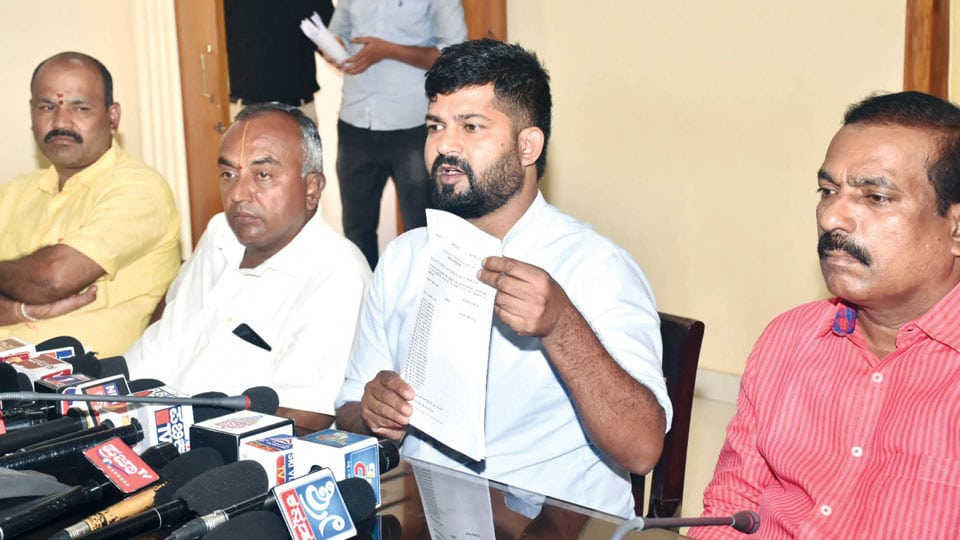 Mysore/Mysuru: The demolition of centuries-old Mahadevamma Temple at Huchhagani village in Nanjangud taluk has sparked a major controversy pitting the State Government against the Mysuru District Administration.

After the video of the demolition went viral on social media, several politicians from different political parties registered their protest against the overnight destruction ordered by Nanjangud Tahsildar. While the Congress put the blame squarely on the BJP Government that enjoys the trust of Hindus, the BJP has shifted the blame on the District Administration for ‘misreading’ the Supreme Court judgement.

Today again, Mysuru-Kodagu MP Pratap Simha claimed that the Nanjangud Tahsildar acted in a dictatorial manner by ordering the demolition of Mahadevamma Temple.

“The Tahsildar  and even the higher officers in Mysuru have not understood the Supreme Court order. They have misinterpreted the judgement and now the blame is on the BJP Government,” he said, addressing a press conference at Jaladarshini Guest House this morning.

“The Supreme Court has said that only those structures that have come up in public places after 2009 will fall under its order. That too the Court said the structures should be demolished only if relocation or regularisation is not possible. Officers have to examine each case individually,” he said.

Simha alleged that certain over-enthusiastic officers chose to target only Temples while leaving out the rest. In the name of the Supreme Court order, many Temples have been razed and the BJP Government has to take the blame. This is due to sheer negligence of officers, he said.

Training his guns on Opposition leader Siddharamaiah, who has questioned the locus-standi of the BJP Government in furthering Hindutva agenda and at the same time demolishing Temples, the MP asked the former CM, “Haven’t officers misled your Government many times? Why so much concern about Temples now? It was you who divided Lingayats and Veerashaivas for political gains. The Supreme Court passed the order in 2009 and you came to power in 2013. Have you analysed the order?”

It is not right to target the BJP Government due to the fault of one Tahsildar. “All Governments have committed mistakes and it is unfair to target the BJP Government. The Deputy Commissioner has no time to look into all local affairs of a place and that is why a Tahsildar is appointed. Any uneducated person can become a politician but only those who complete IAS and IPS are decorated as officers and powers are given to them. If they cannot read and interpret a Court order, it is a sad state of affairs,” he said.

Castigating Nanjangud Tahsildar for ordering the overnight demolition of Mahadevamma Temple, the MP said that the officer had no sense of history and had not understood the Supreme Court order. “How can a 500-year-old Temple be demolished,” he questioned, demanding disciplinary action against the Tahsildar.