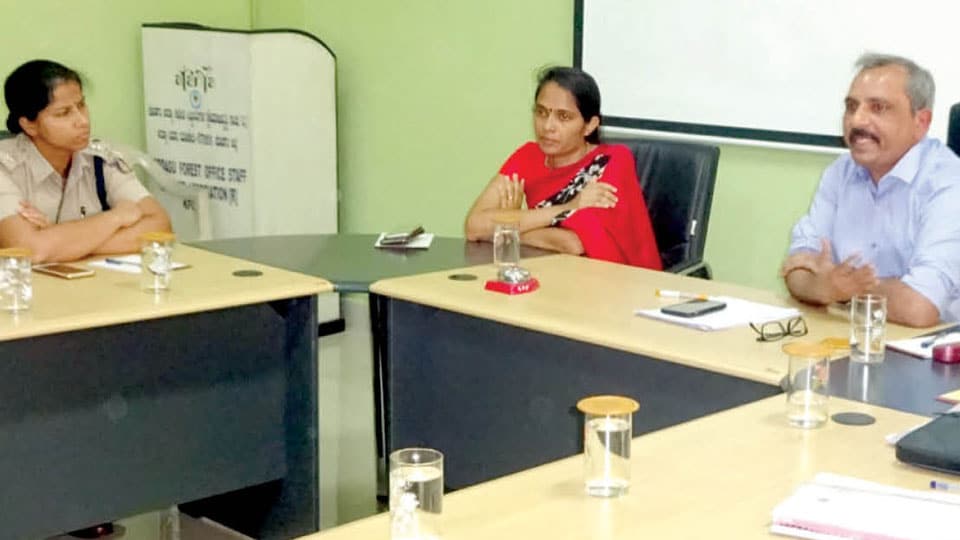 Madikeri: A result-oriented action is needed to control the menace of wild elephants in Kodagu  district. This was discussed at length at the Co-ordination Committee Meeting in which Chief Conservator of Forests (CCF), Madikeri Circle Santosh Kumar, Deputy Commissioner Annies Kanmani Joy, Superintendent of Police Suman D. Pennekar, District Forest Officer Christu Raj and forest official Manjunath and others participated.

Speaking at the meeting held in Aranya Bhavan on May 18, CCF Santosh Kumar said with the increase in menace of wild elephants, there is a spurt in human-elephant conflicts in the district.

There are enough programmes chalked out by the Forest Department to control this conflict. Even then the menace of wild elephants and other animals have increased. Hence, it is important for a coordinated effort from various other departments, he said.

The Forest Department had installed solar and rail track fences, created elephant-proof trenches, constituted Rapid Response Team to provide relief and handle exigencies in the forest area in Kodagu district. Likewise, at the Gram Panchayat level, such information has been shared. In spite of all such measures, there is crop damage and the human-elephant conflict is continuing. To stop this effectively, all the departments must join hands, urged Santosh  Kumar.

The CCF asked the members as to what more steps should be taken to control the wild elephant menace and how to distribute relief immediately to the people who suffered crop loss due to wild animals destroying them.

DC Annies Kanmani Joy said that there was a conflict between humans and the elephants in the district. It is very difficult to fix a price for human life. Hence, it is very important to control the menace of wild elephant and other wild animals. Various departments must join hands in this direction, she added.

The Forest Department officials must hold discussions with Life Insurance companies to give compensation to those people who lose their livestock to the attack of wild animals, she suggested.

Animal Husbandry Department Deputy Director Thammaiah, said that there were provisions to take life insurance for the livestock and the department would do it freely for Scheduled Caste and Scheduled Tribe families. Others must take insurance for their livestock. For this, a camp must be conducted locally or the department must visit houses individually to apprise the householders of the facility, he added.

Thithiamathi Range Assistant Conservator of Forests Sripathi stating that the wild elephant menace has increased a lot in the region said that  wild elephants live in the coffee estates itself. Ample time is required to pay for the crop loss. However, the families of those who have suffered crop loss are demanding immediate relief, he added.

The Coffee Board official said that the wild elephants usually come to the coffee estates to drink water and also because of the cool climes. However, it is very rare that elephants indulge in destroying the crops.

The DC directed the Forest and the Revenue Department officials to once again discuss with the locals about their problems and find a solution by May end.

The Forest Department has to give a letter granting permission to start river rafting once again in Dubare and the necessary information must be provided regarding this, said the DC.

The trees on the Virajpet-Makkuta route which are on the verge of falling down must  immediately be cleared. Steps should be taken to see that those trees that have fallen during pre-monsoon must also be cleared, she said.

Moreover in Nagarahole and Bandipur forest range, there are more elephants, said Deputy Conservator of Forests Christaraj giving the statistics.

Solar and rail track fences, elephant-proof trenches and several other measures have been taken by the Forest Department. The elephants need a daily intake of 200-250 kg food, he said.

Bamboo and jackfruit plants must be grown in the forest region. Huge water bodies and ponds must be created, suggested Animal Husbandry Deputy Director Thammaiah. SP Suman D. Pennekar felt that by holding discussions with the public regarding the human-elephant conflict many problems could be solved.

There was illicit sale of liquor in nine places in the district. To control this menace the cooperation of various departments are important, said Excise Department Deputy Commissioner Veeranna.

There are lot of applications pending for issuing Forest Rights to the tribals and a decision has to be taken on this. Hence, the cooperation of the Forest Department officials is very essential. Ashraya Houses must be built for the original inhabitants of the Gudde Honsauru limit’s Basavanahalli village. Three acres of land has been identified for this purpose.