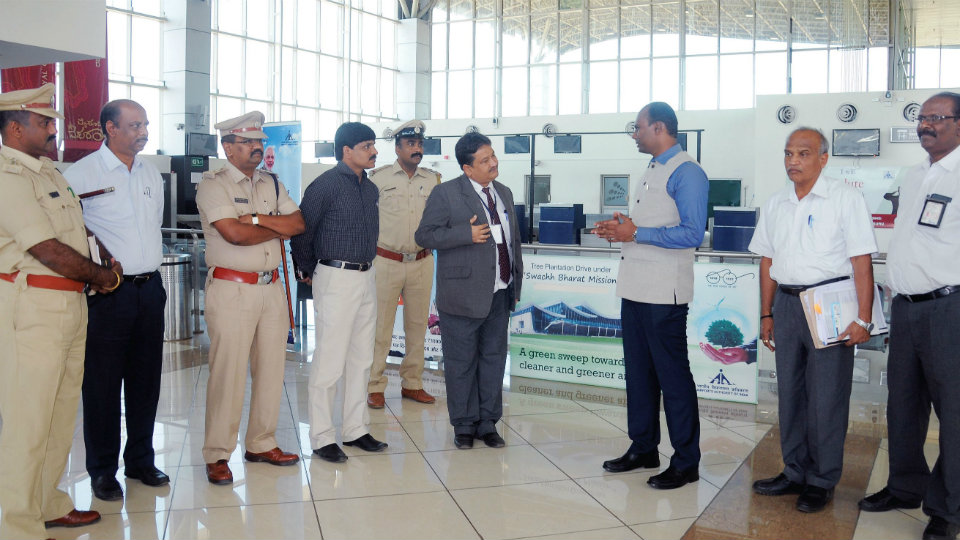 A meeting to review security arrangements at the Mysore Airport following frequent VIP and VVIP movements was held at the Airport premises this morning where measures were suggested to increase vigil and handle emergency services.

According to Airport officials and Deputy Commissioner D. Randeep, it was a routine meeting held twice a year where internal security measures are discussed. Airport Director Manoj Kumar Singh gave a power-point presentation on the existing security measures.

The highlight of the meeting was the suggestion of the team that is handling President’s security. President Pranab Mukherjee’s aircraft landed at the Mandakalli runway when he came to inaugurate the 17th National Jamboree of Scouts & Guides at Adakanahalli in Nanjangud in January this year. At that time, the President’s security officials had asked the Mysore Airport authorities about emergency situations including hijacking and taking hostage. They had suggested to open the emergency gate (which is unused now) to handle any untoward incident.

Today’s meeting took into account the suggestion made by the President’s officers.

Elaborating on the issue, DC Randeep said that the emergency gates cannot be opened as the compound borders a railway line and opening the gates will encourage intrusion that will make VIPs vulnerable. Instead, emergency situations can be handled through the main gate itself, the DC opined.

Members of Airport Environment Management Council took note of the bird menace. Officials said that they were combing the bushes whenever there is a VIP movement to clear threat factors.

As per norms, the runway must have a width of 150 metres and the Mandakalli runway is only 75 metres wide. A land measuring 18 guntas on either sides and an additional land of 10,300 sq.ft is required for the expansion. The DC said that the notification for land acquisition has been issued and the Land Acquisition Officer will take further steps. Stating that expansion of the entire airport, needs around 293 acres that includes NH-212 and High-level meetings are being held on the acquisitions, he added.