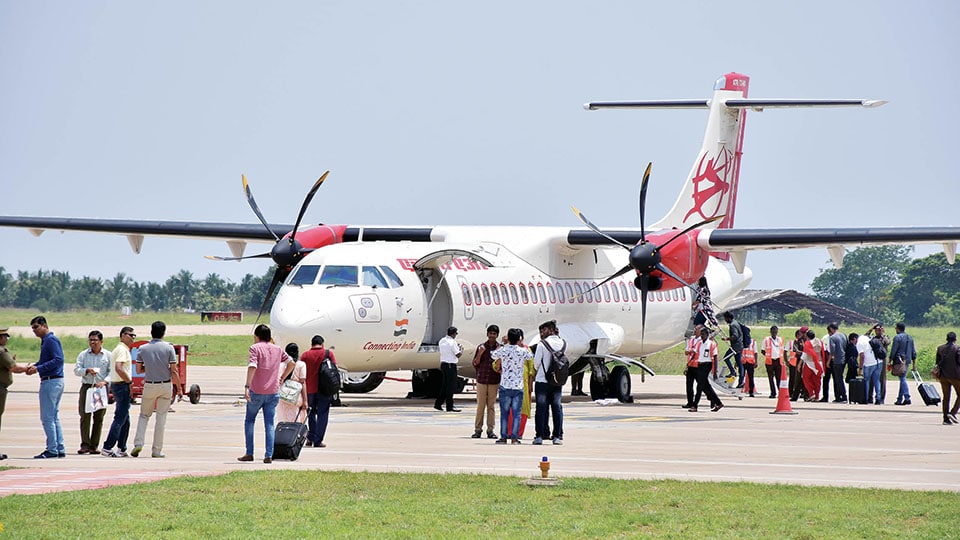 Flights to Goa and Kochi to begin in July; Belagavi and Hyderabad to be added soon

Mysuru: In a move that could go a long way in promoting tourism and industrial development in Mysuru and to enable flyers to take connecting flights to different destinations across the country and world from Bengaluru, a new flight has begun operating from Mysuru to Bengaluru from today.

The new flight service was inaugurated at Mysore Airport at Mandakalli this morning by Mysuru District Minister G.T. Devegowda, Tourism Minster S.R. Mahesh and MP Pratap Simha who was instrumental in getting the flight to Mysuru in addition to the lone flight that flies passengers from Mysuru to Chennai every day. The new flight was sanctioned to Mysuru by Central Government under the third phase (UDAN 3.0) of its Regional Connectivity Scheme (RCS) or UDAN (Ude Desh Ka Aam Nagarik) Scheme.

The Alliance Air (a subsidiary of Air India) flight to Bengaluru will operate five days a week – Monday, Wednesday, Friday, Saturday and Sunday. It will be a 70-seater ATR-72 flight and will take 55-minute journey from Mysuru to Bengaluru.

On the first day of the flight today, 38 passengers left from Mysuru to the State capital and 42 passengers had taken the flight from Bengaluru to Mysuru. The first three passengers who left to Bengaluru today were Farid, Pavan Kumar and Sharath Kumar. All the passengers were welcomed and seen off warmly by Alliance Air and Airport Authority of India staff. A cake was cut to mark the occasion.

The good news is that the Ministry of Civil Aviation has approved two routes from Mysuru to Goa and Kochi. MP Pratap Simha said that two more flights to Goa and Kochi (Air Alliance) will become operational this month or in July. Both the routes would be operated under UDAN.

The commencement of the Mysuru-Goa and Mysuru-Kochi flights is expected to boost tourism in the region. There had been a demand from the tourism bodies to operate flights on these two routes for quite some time, he said.

In January, the Civil Aviation Ministry awarded 235 routes under the UDAN 3.0. Four airports in the State — Bengaluru, Belagavi, Kalaburagi and Mysuru — have been chosen to operate flights under UDAN 3.0. When the announcement was made, Belagavi bagged the bulk of the routes as it has got 13 routes.

Mysuru had bagged five routes which are to Goa, Kochi, Bengaluru, Belagavi and Hyderabad. Of these, three routes have already been approved by the Ministry of Civil Aviation. Ghodawat, Alliance Air, InterGlobe, Air Odisha, SpiceJet, Turbo Megha are among the selected airlines.

The new flight from Mysuru to Bengaluru has elated passengers. Madhu of Vidyaranyapuram who is a frequent flyer to Goa due to his telecom business said that he used to take a taxi to Bengaluru airport by shelling out Rs. 2,500 to Rs. 3,000 and spending over four hours in a car. “Now I can pay less and reach Bengaluru Airport in one hour,” he said.

Similar sentiments were echoed by Gowtham, a cloth merchant from city who said that the flight will help people to take connecting flights to many destinations. “If Goa, Kochi, Hyderabad is added, it will be a real boon to passengers,” he said.

Speaking after inaugurating the flight services, G.T. Devegowda said that the State Government will expand the airport so that it can handle bigger flights. “Over 280 acres of land is required for the expansion and the responsibility of land acquisition has been handed over to Karnataka Industrial Area Development Board. The issue is that farmers are demanding Rs. 2 crore per acre and we are negotiating with them,” he said assuring all cooperation from the State government.

MP Pratap Simha said that the Centre has already allocated Rs. 700 crore for airport expansion. “Now it stands on 498 acres and we require 280 acres for 2.8 km runway expansion and other allied facilities. The airport that was a grazing land for cows and buffaloes till 2016 has seen activity after the PM Narendra Modi government launched UDAN scheme,” he said.