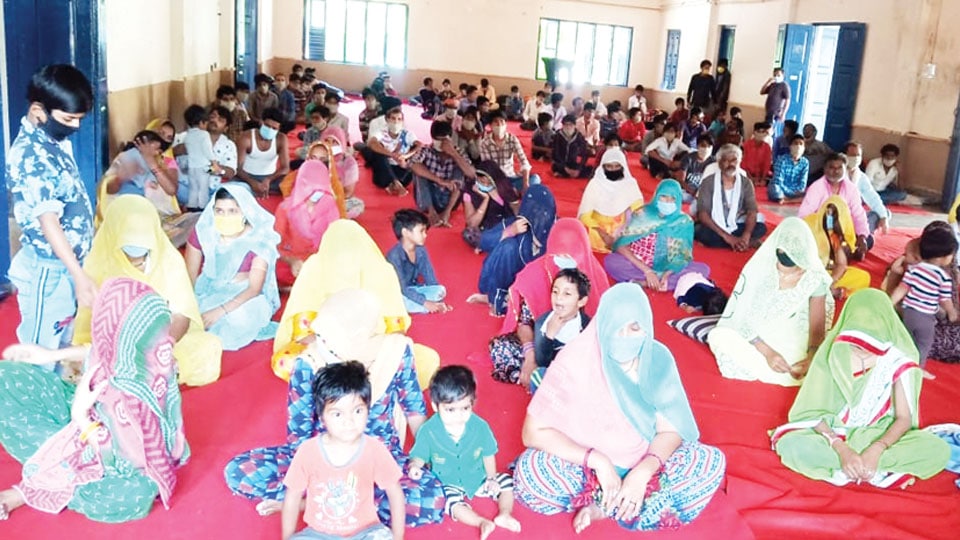 Over 170 migrant workers from Rajasthan stranded in city: Sheltered at Siddarthanagar choultry

Mysore/Mysuru: Over 170 migrant workers from Rajasthan who were residing in the city for their livelihood, are now left stranded due to the COVID-19 lockdown. However the district administration has provided shelter to them at the CITB Choultry in Siddarthanagar.

These  workers along with their families had come to Mysuru years ago and earned their livelihood by selling Paanipuri, Bhelpuri, Mewar Ice-cream and such other snacks. But following the nationwide COVID-19 lockdown announced last month, these families planned to return to their native places in Rajasthan. As planned, they left for Rajasthan in two Lorries on Mar.30 and had entered Maharashtra, when they were stopped by the Maharashtra police near Solapur. Despite repeated pleas, the police did not allow them to proceed further and left with no other option, they returned to Mysuru on Apr.1, when they were intercepted by the city police on the ring road at Alanahalli. Later the district administration sheltered them in CITB Choultry at Siddarthanagar,where they are just dreaming when they will be able to return back to Rajasthan.

Rehman Khan, a Paanipuri seller said that they were ruing that could not stay with their families when all others are spending quality time with family in their homes during the lockdown. Pointing out that he was staying with his family in Mysuru for the past few years, he said that all his extended family members resided in Rajasthan and all of them wanted him to be back in Rajasthan.

Like Rehman Khan, so has been the case of most other Rajasthani families. These families who are mostly street vendors and food sellers, live in rented houses at villages located close to the city such as Rammanahalli, Hullahalli, Kuder, Mooguru etc.,while some stay in Nanjangud and distant localities of the city. Among those sheltered include a couple of  pregnant women and lactating mothers, a three-month old infant,22 children and 23 women. Although the district administration is providing them food, they are finding it difficult to adjust to the food given to them such as Tomato Baath,Rice Baath etc., as they are very much accustomed to their traditional Rajasthani food of Roti, Dal and Sabji. Finding it difficult to get adjusted to the food given to them, some of those are eating only little, while few others  have experienced stomach upset. The Rajasthani families belong to Gadri Patel,Vaishnav,Rajput,Rawat and Daangi communities, while some others come from Muslim community.

Kaalu Singh, a street food vendor said that his family is waiting to return to Rajasthan at the earliest and appealed the authorities to allow them to go back. So has been the case of all others sheltered in the Choultry.