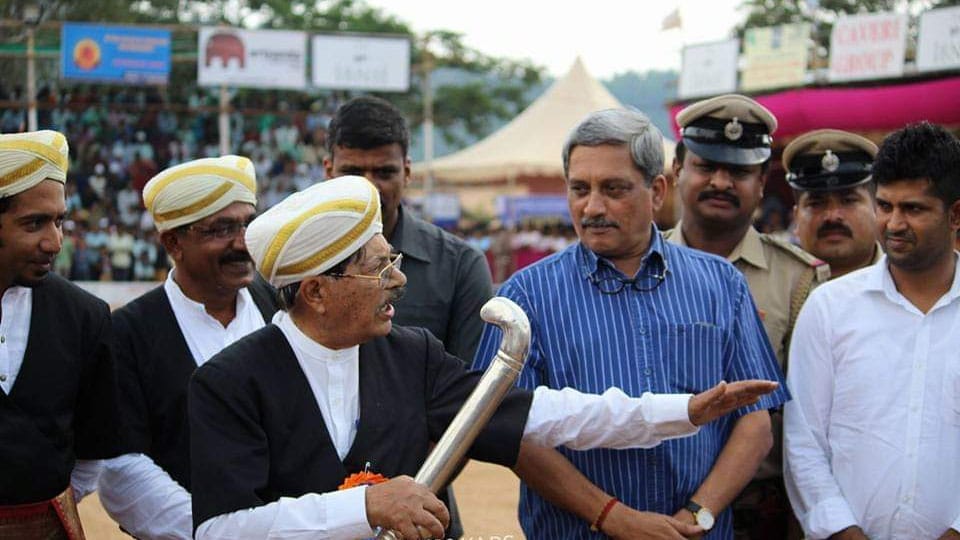 Pandanda Kuttappa (Kuttani), the man behind the genesis of the Kodava Family Hockey Festival, might have left us for his heavenly abode but his contribution to hockey will be remembered for generations to come and will forever remain in the hearts of hockey lovers. Here we publish an article by Pratap Simha, MP, Mysuru-Kodagu Lok Sabha Constituency. —-Ed

Sultan Azlan Muhibbuddin Shah ibni Almarhum Sultan Yussuff Izzuddin Shah Ghafarullahu-lah…The name is pretty long, just like D-to-D pass on a hockey turf, right? As his name suggests, Azlan was a king and he, like his ancestors, ruled Perak region in Malaysia.

Here in India, we had our Princely States of Mysore, Indore, Gwalior and Pune. One can say that Perak region in Malaysia is no different than these Princely States of India. And as Mysureans loved Wadiyars, subjects of Perak loved their King.

Like our Wadiyars, Sultan Azlan was a great patron of poetry and art. While studying Barrister at Law in England, Sultan Azlan Shah got fascinated with hockey game so much so that after coming back to his country with a Barrister degree, he built a team of hockey players in Malaysia. At that time, most of the Malay islands were European colonies and the British supported him.

Azlan Shah started organising hockey tournaments in his country and within a short span, this sport became popular among the youth in his country. During those times, there was a significant population of Tamilians in Malaysia who used to work as labourers. Sultan noticed that these Tamilians had good physique and necessary talent for the game and so he nurtured a number of young talented Tamilian hockey players for his squad. Azlan Shah Hockey Tournament is now a major hockey event and the world calls him ‘The father of Asian Hockey.’

Just like Azlan Shah, if we utter the word ‘hockey’ in Karnataka, a name comes to our mind. He is the one who popularised hockey as a sport in our State. Very much like Sultan Azlan Shah, he was also rich and was pursuing a totally different profession. And the tournament he started is now featured in Limca Book of Records.

Pandanda Kuttappa, fondly called Kuttani by his near and dear ones, is the brain behind ‘Kodava Hockey Namme’ or Kodava Hockey Festival. This festival is now recognised as one of the largest field hockey tournaments in the world. Pandanda Kuttappa breathed his last on Thursday, May 7, 2020. The name of Pandanda Kuttappa will remain in the history books as long as hockey is played in India.

Pandanda Kuttappa was working as a bank officer. Just like Sultan Azlan, Kuttappa established ‘Kodava Hockey Academy.’ In 1997, he organised hockey tournament for the first time in Kodagu and 60 teams participated in that ’Pandanda Cup’ hockey tournament. And the number of participating teams increased every year. His name has been featured in the Limca Book of Records for being instrumental in starting the Kodava Family Hockey Tournament.

This hockey tournament is held every year in Kodagu district in the month of April and May. A special feature of this tournament is that each year this hockey festival is organised by one of the Kodava families and the tournament is named after the organising family. The organising family is responsible for arranging the finances needed for the festival. The inaugural edition of the festival was named as Pandanda Cup, after the organisers, Pandanda Family. In 2003, this hockey festival saw the participation of the highest number of 280 teams in the Kaliyanda Cup held at Napoklu.

Over the years, this popular sport event has greatly influenced the lives of Kodavas. This has become a motivating factor for those who are willing to join Indian Army. Every year, professional teams from different parts of the country eagerly wait to watch this hockey festival. Other than Kodava Hockey Festival and Azlan Shah Cup, probably there is no other example of such kind in the world where a sport event is making so much of an impact in the lives of general population.

‘Malaysia, Truly Asia’ captures and defines the essence of that country’s unique diversity and Azlan Shah Cup has been a major contributing factor. Similarly, Kodava Hockey Festival has become the nursery of Indian hockey. As we see in the history of hockey, in the beginning, this sport was popular only in Europe. After Sultan Azlan started organising hockey tournament in his country, Asian hockey became more than just a buzzword all over the world.

In fact, during the British rule, hockey was a popular game of Kodavas. Kodava clan have a long history of association with the game of field hockey. There is a long list of national-level players from Kodagu region including Maleyanda Muthappa, Paikera Kalaiah, the great goalkeeper or ‘The Wall’ Anjaparavanda Subbaiah, former captains of Indian Hockey team such as Govinda, Maneyapanda Somaiah, Mollera P. Ganesh, Arjun Halappa, Olympian Cheppudira Poonacha, Koothanda Poonacha who has coached a number of overseas teams, penalty corner specialist Ballachanda Len Ayyappa, striker Palanganda Amar Ayyamma, Raghunath, Sunil, promising players such as Nikkin Thimmaiah, Alemada Cheeyanna, Sannuvanda Uthappa and the list goes on and on.

Players from Kodagu have dominated in all major hockey teams of the country and this includes national hockey clubs such as MEG, AAC, Railways, Air India, Canara Bank, SBI, HAL and Tata. You name any major hockey team in India and there would be at least one Kodava in each eleven-member hockey team. Even in hockey clubs of the State, one would certainly find either an Appanna or a Bopanna. Interestingly, in some Universities, the eleven-member hockey team comprise only Kodavas! The reason is very simple.

You might know how China prepares their children for Olympics. Just like that, every Kodava kid in Kodagu carries a hockey stick while going to their primary school. Coffee and hockey have become synonyms with Kodavas so much so that there goes a saying: If you throw a stone in Kodagu district, it will either hit a soldier or a hockey player. Hockey is like a religion in Kodagu and like each Kodava home has the traditional gun, each home will have a couple of hockey sticks.

All the major towns in Kodagu have at least one hockey club in their area. ‘Blue Star’ of Madikeri, ‘Dolphin’ and ‘Wanders’ of Somwarpet, ‘Towers’ of Virajpet, ‘Shivaji’ of Gonikoppal, ‘BBC’ of Gonikoppal, ‘Sports Club’ of Ammathi are the names of a few hockey clubs in Kodagu district. There is no wonder that this small district in southern part of Karnataka has given so many great hockey players for the field hockey teams in India. Here is one more interesting fact: It is said that both Field Marshal Kodandera M. Cariappa and General Kodandera S. Thimayya caught the attention of British because of their keen interest in hockey.

History of modern hockey dates back to 1861 when Europeans took this game into their colonies in different parts of the world. A number of hockey clubs were established in all major provinces of British India, but people of Kodagu and Punjab gave special status to this game and kept it close their heart. In 1885-1886, British started playing this game in their favourite ‘Tiny Model State’ of Coorg (Kodagu). Probably, at that time, no European would have hoped that this game would become so popular in this region; so much so that every ordinary Kodava started using a branch of tree as a hockey stick and any hard wooden nut as a ball. Meanwhile, British started recruiting young Kodavas for their troops.

Even British were enthralled with this game. There is an interesting story here. In Madikeri, there is a hockey ground by the name ‘Men’s Compound.’ History says that this British coffee planter with last name ‘Men’ or ‘Mann’ was so fond of this game that he turned part of his coffee estate into a hockey ground! Even to this day, hundreds of young players are being trained in this popular hockey ground known as ‘Men’s Compound’ in Madikeri. None of that Englishman’s descendants are now living in the region, but his name has now become synonymous with hockey for passionate players of the game. It is said that during British rule, hockey tournaments were held in this ground every Sunday. British used to bring players from faraway places such as southern part of Kodagu and organise tournaments in memory of their senior officials.

On a bullock cart

There is another interesting story here. It states that to participate in a hockey tournament, which was to be held in Cantonment area of Bengaluru, a hockey enthusiast by name Pattada Somaiah had travelled to Bengaluru from Kodagu with his team members in a bullock cart!

Here is one more from the pages of history. In 1960s, there was a hockey team comprising primary school teachers who used to participate in major national level hockey tournaments. This ‘Coorg Teacher’s Team’ came to limelight for playing against a number of international teams and had created history by scoring 20 goals against Sri Lankan team in Madras! Some members of this troupe had even represented India. Where else can we find such a passion and affection for the game? For Kodava clan, hockey is just not a game but part of their culture. All the credit definitely goes to Pandanda Kuttappa, the legendary figure.