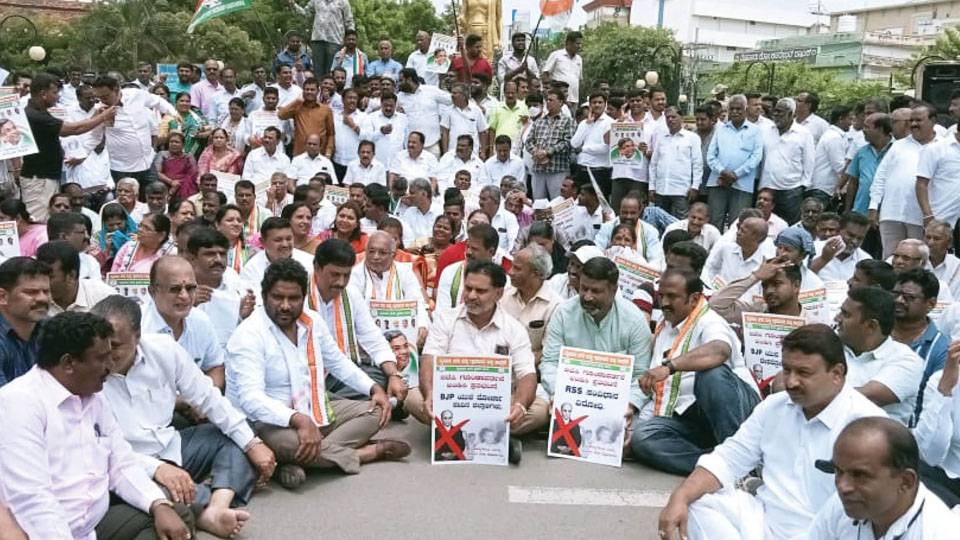 Madikeri/Mysuru: Protests erupted in several parts of Mysuru, the hometown of Congress Legislature Party leader and former Chief Minister Siddharamaiah, where groups flayed the incident of egg-throwing at Siddharamaiah’s convoy in parts of Kodagu yesterday.

Siddharamaiah faced stiff resistance from BJP workers during his visit to Kodagu to ascertain the damage in flood-affected areas. As his convoy neared the Kodagu district check post near Thithimathi, BJP workers and Hindu activists showed black flags and waved portraits of Hindu ideologue Veer Savarkar.

They expressed their displeasure over the stand of Congress on Savarkar and shouted ‘Go Back, Siddharamaiah’ slogans, and threw pictures of Savarkar at him through the vehicle window. BJP workers tried to gherao Siddharamaiah’s car at Guddehosur near Kushalnagar and tried to throw stones. However, the Police took the workers into custody and allowed the former CM’s convoy to pass.

Siddharamaiah had to face a similar protest in Madikeri where BJP and Congress workers came face-to-face at the Toll Gate. BJP workers threw eggs at Siddharamaiah’s convoy and shouted slogans, calling Siddharamaiah ‘anti-Hindu’ and ‘anti-Kodava’.

They also waved black flags at the former CM and shouted slogans, displaying the portraits of Savarkar. There were attempts to gherao his vehicle but the Police foiled the bid. Condemning the incident, Congress workers gathered in large numbers and raised slogans against BJP and tried to attack BJP workers. The Police had a hard time handling the situation.

The incident in Kodagu outraged the Congress workers in Mysuru and as soon as the news spread, they gathered in many circles and protested.

Staging flash protests, Congress workers demanded the immediate arrest of BJP and Hindu activists who are allegedly behind the attack.

Protests were held at Ramaswamy Circle where old tyres were burnt by the Congress workers under the leadership of former MLA M.K. Somashekar. They blocked traffic for some time but were dispersed by the Police who swung into action.

Demonstrations were also held in front of the Gandhiji’s bust  near the Mysore Law Courts Complex where the Siddharamaiah Fans Association condemned the act and also vouched to disrupt the programmes of BJP leaders if immediate arrests were not made in Kodagu. Protests were also held at Silk Factory Junction on Manandavadi Road under the banner of Krishnaraja Constituency Congress Workers.

Congress to protest at Kodagu SP Office on Aug. 26

This is the work of cowards. They (BJP) cannot run a Government, there is no governance, the Government is absolutely dead and all petty strategies like this are being used to divert the attention of the people,” Siddharamaiah said reacting to the incident where eggs were thrown at his convoy.

The former CM said the protests were engineered to prevent him from viewing the shoddy works carried out by the BJP Government, its two MLAs in the district and the contractors associated with them.

“The BJP is perturbed that the Congress is set to win both the Assembly segments in Kodagu in the next elections and hence, was desperate to prevent me from touring in Kodagu,” he said.

Siddharamaiah, who inspected a major retaining wall constructed at Madikeri DC Office at a cost of nearly Rs. 8 crore which was collapsing now, said the quality of work is a clear indicator of the shoddy works and accused the MLAs of being in nexus with the contractors.

“Because I have come here to see the shoddy works, they are carrying out black flag protests,” he added. He lashed out at the Police accusing them of colluding with the BJP to create trouble during his visit. The Congress leader said he would visit Kodagu again on Aug. 26 and lead a protest in front of the Office of the Kodagu Superintendent of Police (SP).

ONE COMMENT ON THIS POST To “Echo of ‘go back Siddharamaiah’ campaign in Kodagu: Protests erupt in Mysuru; egg-throwing denounced”