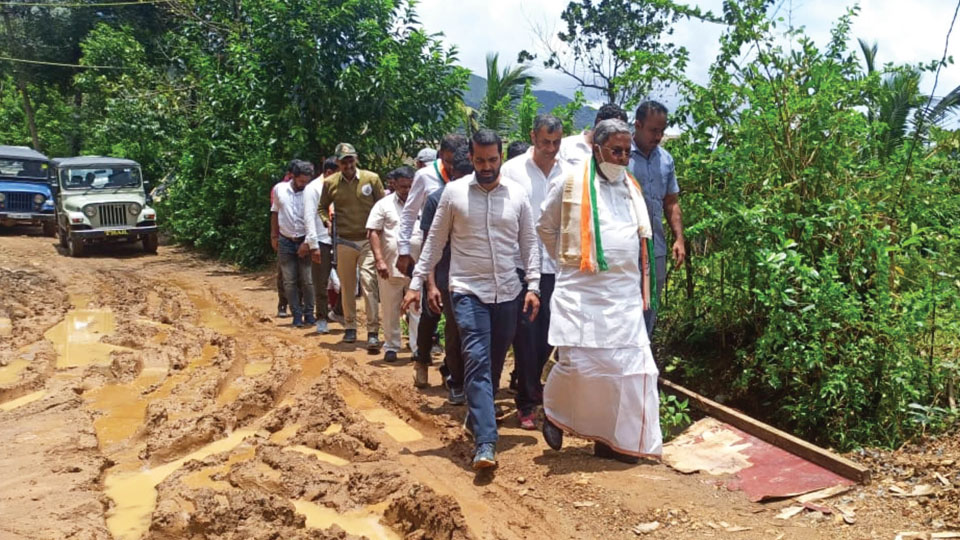 Siddharamaiah lashes out at BJP MLAs for lapses; visits flood-affected areas of Kodagu

Madikeri: Expressing his dissatisfaction over the non-distribution of relief to hundreds of flood-affected people in Kodagu, Congress Legislature Party leader and former CM Siddharamaiah lashed out at the State Government for lapses that have led to severe trauma of people.

Visiting a couple of areas in Madikeri Taluk where people were affected by floods and landslides at Second Monnangeri, Ramakolli, Devarakolli, Koynadu Kindi Dam and Kurthoji, Siddharamaiah said yesterday that suitable compensation has not been distributed to the flood victims and the BJP MLAs of Kodagu were busy in colluding with contractors to pocket commission.

“Both the MLAs are indulging in commission business and they have neglected all development works and in turn, people are suffering. See what happened to the retaining wall at the Kodagu DC Office. Rs. 8 crore has been spent on it but the wall is collapsing. The MLAs have got huge commissions to sanction the works. Everyone can see what has happened now,” he told reporters at Sudarshan Guest House in Madikeri.

“Those affected by floods and landslides in 2018 and 2019 have still not been compensated and I am told that the houses that have been built are lying vacant with vandals looting the household articles and door frames. The BJP Government has failed to protect the interests of people,” he added.

The flood-affected families have submitted a memorandum to the District Administration, seeking rehabilitation from the riverbanks, but there has been no response, Siddharamaiah said, accusing the Government of negligence.

Siddharamaiah warned the State Government that there would be protests if there was further delay in providing funds for relief work in flood-hit regions. He blamed the Centre for the delay and alleged that CM Bommai had failed to get necessary grants.