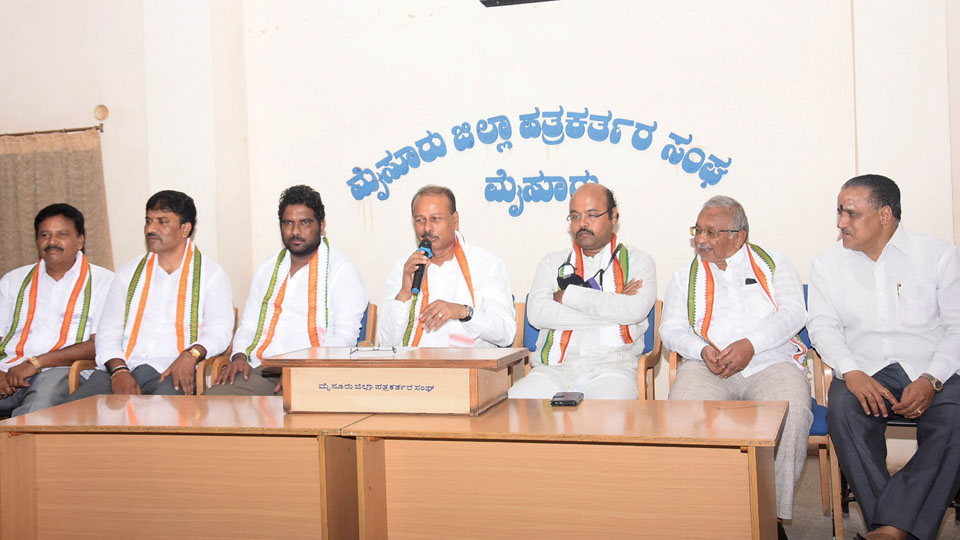 Egg attack: Congress to take out Kodagu Chalo on Aug. 26

Mysore/Mysuru: KPCC Working President R. Dhruvanarayan has said that the Congress party will take out ‘Kodagu Chalo’ on Aug. 26 to protest the egg attack and other disturbances during the visit of former Chief Minister Siddharamaiah to Kodagu yesterday.

Addressing a press meet at Pathrakartara Bhavan this morning, he said “When former CM Siddharamaiah was visiting Kodagu to oversee the relief measures taken by the State Government in the rain-affected areas of the district and following complaints of non-payment of compensation and corruption,  he was attacked with egg, shown black flags and slogans were shouted asking him to go back. This is a Government sponsored programme. Why did the intelligence fail to foresee the event and why the Police did not take precautionary measures?” he questioned.

Charging the State Government of creating disturbances to cover up its failure on all fronts, Dhruvanarayan wondered why no precautionary measures were taken at other places after the attack on Siddharamaiah  in Kodagu.

“The Police were silent spectators. In a democracy, an Opposition Leader is equal to the Chief Minister. Kodagu is a land of warriors and has the reputation of sending one person from the family to country’s defence forces which is a sign of patriotism. In such a land, a cowardly act has been committed,” he rued.

The Congress Working President announced that the party will take out ‘Kodagu Chalo’ on Aug. 26 and disclosed that thousands of Congress party workers will participate in the protest.

MLA Dr. Yathindra Siddharamaiah, who too spoke, said that the cowardly incidents in Kodagu are an indication of BJPs ideological and intellectual bankruptcy.

H.D. Kote MLA Anil Chikkamadu said that there is a total collapse of law and order in the State and the BJP is creating communal disturbances.

3 COMMENTS ON THIS POST To “Egg attack: Congress to take out Kodagu Chalo on Aug. 26”