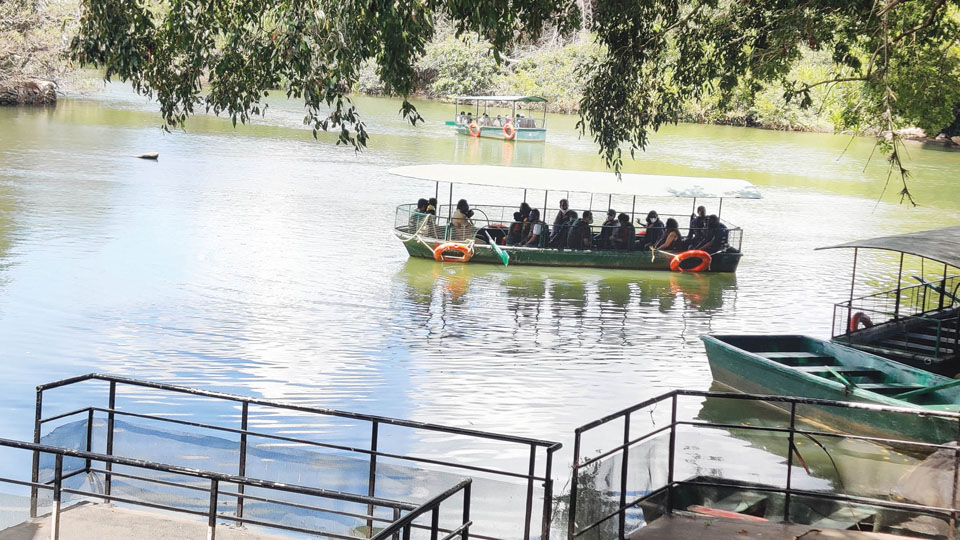 Srirangapatna: The boating service for tourists and visitors at Ranganathittu, which was temporarily stopped following heavy discharge of water from KRS Dam to Cauvery River, resumed yesterday.

Following heavy rains in Kodagu and Cauvery River catchment areas last month, there was heavy inflow of water to KRS Dam and the dam had reached its maximum capacity of 124.80 ft. The authorities, for the safety of the Dam, began releasing large quantity of water to Cauvery River resulting in Ranganathittu Bird Sanctuary getting flooded and the islands submerging.

As a precautionary step, the Forest Department had temporarily stopped boating service at the Bird Sanctuary since last 37 days and had also restricted entry of tourists for 25 days.

With rains taking a break since a couple of days, inflow of water to KRS Dam has also decreased and the discharge of water from the Dam to Cauvery River has been reduced.

Hence, the Forest Department officials have commenced boating service at the Bird Sanctuary from yesterday with 16 fibre boats and one wooden boat taking tourists on rides.

Islands Damaged: With KRS Dam reaching its maximum capacity, the Dam authorities had released more than 1 lakh cusecs of water from the Dam to Cauvery River for a couple of days, which resulted in five of the 25 islands at Ranganathittu getting partially damaged.

In 2019 too, there was heavy rains and the inflow of water to KRS Dam had also increased. As the Dam reached its full capacity, there was heavy discharge of water from the Dam to the River and the islands were partially damaged due to strong water force.

Meanwhile, Range Forest Officer (RFO) Santosh Hugar said that due to heavy rains last month, Ranganathittu Bird Sanctuary was flooded completely, which resulted in many islands at the sanctuary getting partially damaged.

Pointing out that the repair works would be taken up in the coming days, the RFO said that following restrictions to tourists and visitors, there was a loss of Rs. 50 to 60 lakh in the revenue.