Home » Columns » Abracadabra By K. B. Ganapathy » Parking woes of our city 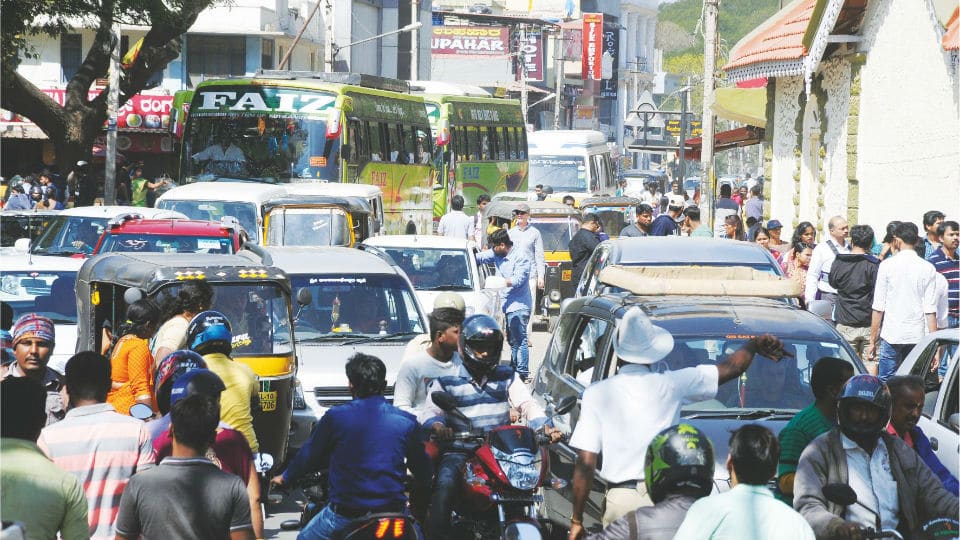 Parking woes of our city

According to Political Science, good governance means the greatest good of the greatest number. Not the good of a community or a vested interest.

Last Wednesday around 5 pm I was passing in front of the main gate of Sri Chamarajendra Zoological Gardens (Mysore Zoo) in my car. The road was crowded with people, mainly tourists and vehicles parked haphazardly on the roadside causing total congestion and confusion. The parking space facing the main gate of the Zoo was full to the last vehicle. I understand in this one-and-a-quarter acre space, about 250 vehicles could be parked.

This is the common sight in this area on all days and at all times except on days when the Zoo is closed.  Getting trapped for nearly 15 minutes at this point, I was wondering if it was not possible for our people’s representatives both at the                  Assembly and at our City Corporation to find a solution for this sticky problem of endemic traffic jam.

I do not know if there is any truth in what I heard from a couple of shop-keepers in the area. But, their opinion is that there has always been a mafia that controlled the parking of tourist vehicles in this area with political connections, which does not want a permanent solution for the parking of vehicles. No wonder we have been reading about the confrontation between the Police and the tourists and also the tourists and the mafia that collects the parking fee. Much of the joy, a tourist with his family may have by visiting the Zoo is lost settling the parking fee and worst retrieving the vehicle from the Police who would have put the wheel-lock to the vehicle for wrong parking. 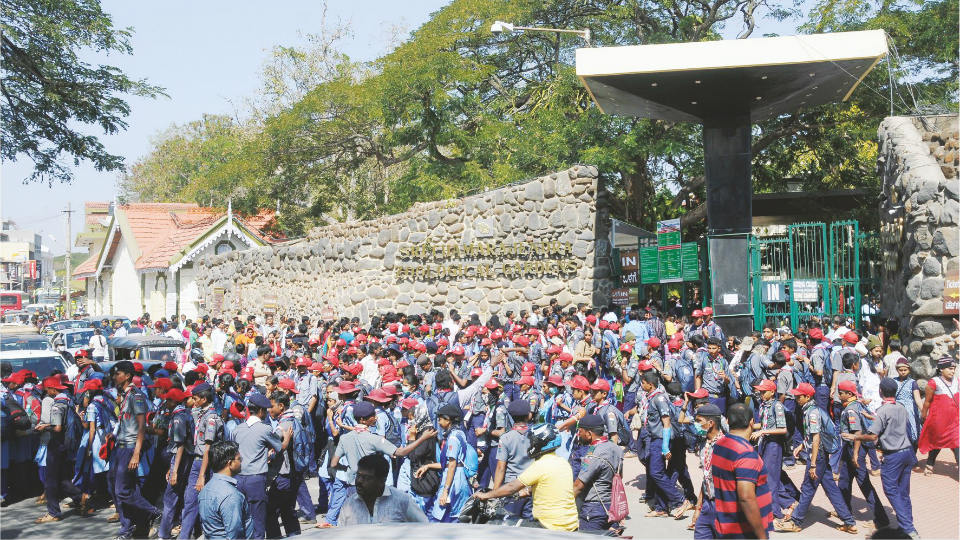 Vehicle parking has always been a problem in Mysuru city ever since the number of vehicles within the city began to increase since about 10 years. Add to this the huge increase in tourist traffic especially on weekends. Sadly, there is no corresponding increase in the availability of parking space especially in tourist-centric places like the Zoo, the shopping areas D. Devaraja Urs Road, Sayyaji Rao Road, Ashoka Road and others. Small wonder, neither the local politicians nor the bureaucrats ever paid attention to this problem. In fact, politicians seem to be the ones who are acting as obstructionists whenever the town planners or the bureaucrats come up with solutions and suggestions to solve this problem.

I remember receiving a circular invitation from the DC’s office with two or three subjects for discussion. The first one was the question of finding a solution to the parking problem on Devaraja Urs Road. Earlier, the chaotic traffic movement on this road was put an end to by the then Police Commissioner by making it one-way from K.R. Circle. However, the problem of parking persisted with the shoppers parking their cars parallel to the parked cars thus stalling the free movement of vehicles.

I was very happy that a mention was made in the circular about the available open space belonging to the government (MCC) close to Devaraja Urs Road where a multi-level building for parking was suggested. Surprisingly, just a couple of days before the meeting, I got a call from the DC’s office saying that the meeting was cancelled. I see some building being constructed in that place now. Earlier to this, behind the Devaraja Urs  Road on the first cross road to the left from K.R. Circle there was a huge vacant site that belonged to the then CITB. Some readers had suggested through letters in Star of Mysore and Mysooru Mithra that this vacant space could be used for a multi-level building for parking. But, that was not to be. A regular commercial building came up in that place.

And then once again when the question of appropriating the Makkaji Chowk space came up before the MCC, suggestions came from the readers that it be made a city-centre in the down-town area that it is. Keep it as an open lung space like we see in many western countries  — Trafalgar Square in London, The Place de la Concorde in Paris at the end of Avenue des Champs-Élysées or Red Square in Moscow, though not of that scale. Or alternatively, use the Makkaji Chowk area for vehicle parking.

The MCC with great effort acquired the land including that belonged to private parties. I guess even now the matter is not yet fully settled with some of the owners. However, what was unthinkable and devastating for the healthy development of the city was when the land was given away to a private party for constructing the Garuda Mall. A golden opportunity for solving the problem of parking was lost.

It was then, probably from some genius of a town planner, a solution for this parking problem was conceived. His eyes fell on a huge open space to the right of the iconic Town Hall where our politicians delivered their political sermons during the election time and whenever their tall political leaders visited the city. An open air theatre and an underground parking area was planned and the work started. It is more than five years and the works are going on turning the whole area into an excavated zone with dug-up mud forming hillocks all over the area.

In such a dismal scenario of our city’s development, no wonder our city planners and administrators are unable to find a solution to the parking problems at the Zoo. I am told, the authorities have decided to provide parking space inside the Dasara Exhibition Ground alongside M.G. Road for those who visit the Zoo and also the Exhibition. Well, there cannot be a more ridiculous and unrealistic plan for parking vehicles of those who visit the Zoo than this. It is like Muhammad-bin-Tughluq, the eccentric and short-sighted emperor who shifted his capital from Delhi to Daulatabad in Maharashtra and back again to Delhi.

I learn, the vacant land in front of the Zoo gate measuring one-and-a-quarter acre belongs to MCC. The Zoo Authority has leased this land from MCC for 50 years for the specific purpose of parking vehicles. Shockingly, till about a few years back, even this space was not completely used for the purpose for which it was leased. A number of petty shops were allowed to come up in this space and surely somebody was making money at the cost of the Zoo and the tourists. Now that the traffic to the Zoo is increased, good sense prevailed, and these petty shops were removed making more space for parking vehicles. But this too is not enough; which is why vehicles are seen parked all over the place, in the by-lanes and also on the main road as mentioned earlier.

Now, I learn that about two-and-a-half-years ago, the MCC had entered into another agreement with the Zoo Authority regarding this land under which the MCC handed over the possession of the land to Zoo Authority for the specific purpose of constructing a multi-storied building exclusively for parking of vehicles with a capacity of parking about 1,800 vehicles.

This apology for not executing the work seems untenable. However, I must caution the Zoo authorities about the land being lost to them when MCC decides to construct a community hall in this place as often happens in this city. I urge our MLAs and our city fathers to take up this issue urgently and get the multi-storied building for parking of vehicles in this place.