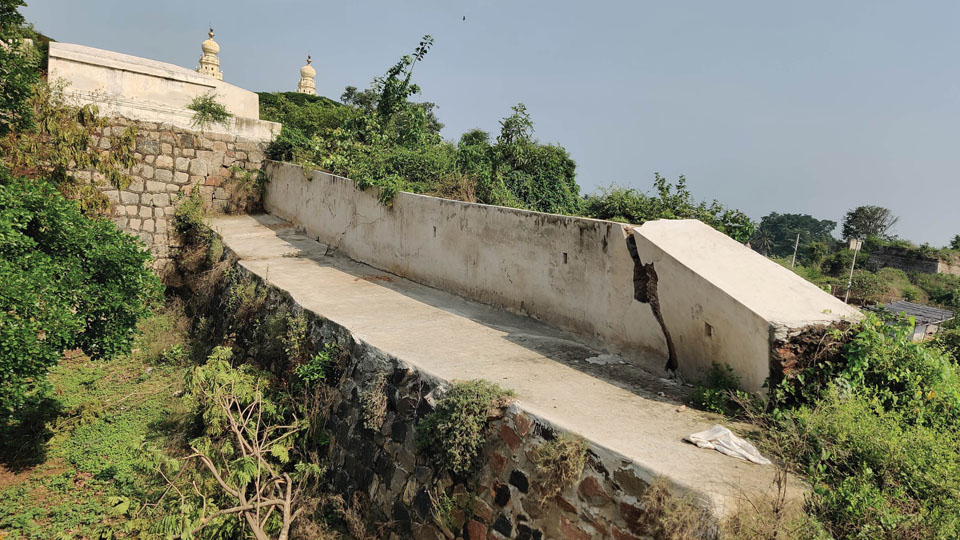 Srirangapatna: The archaeologically significant 15th Century Srirangapatna Fort on the banks of River Cauvery that had witnessed several battles during the British era is on the verge of decay, thanks to monumental neglect. Due to heavy rains since the last couple of days, a portion of the once impregnable Fort has collapsed in the eastern entrance right at the middle.

This apart, wide cracks have been observed in the remaining parts of the eastern entrance. Ironically, these entrances have withstood many attacks from outside and had prevented the entry of enemy forces into the town during the British era.

The Srirangapatna Fort acts as a barrier to the River Cauvery. The 6.5-km Fort extends up to an area of 18 sq.km and covers the entire Srirangapatna island. Every monsoon, damages occur invariably as there is absolutely no maintenance. Deep-rooted plants have grown on the Fort with roots causing wide crevices. This leads to water seepage and gradually, the sturdy wall weakens.

Over the years, the layers of the Fort, built by Dandanayaka Thimmanna Hebbar in 15th Century and later strengthened by Hyder Ali and Tipu Sultan, have been chipping away as the water has been seeping into the walls.

Although the Fort has been recognised and considered to be among the protected and preserved archaeological heritage sites, there has been considerable neglect of preservation of the Fort.

The top layer of the wall has collapsed and its remnants are lying near the river. The Fort has been lying in a state of neglect though the Office of Archaeological Survey of India, that is supposed to take steps to protect the Fort, is located right on the river island.

Though residents have raised the issue of sturdiness of the Fort near the town’s Railway Station that lies behind the western part of the bus stand where the Obelisk (war memorial) is situated, nothing much has been done here too to restore the damaged parts.

At many places of the Fort, one can find waste water puddles inside the Fort walls. These puddles are nothing but rainwater seeping from the wall and they are weakening the structure due to high moisture content. Those places of the Fort that are still strong are dominated by flex-banners of political leaders.

The two houses right in front of the Fort that were once occupied by cavalry and Fort soldiers are now occupied by fish merchants, a sad reflection on the gross negligence by authorities.

The Fort was admired by the British for its sturdiness and unique design to prevent enemy entry. Its impregnability has been mentioned by many British officers in their books and in their communication back to England.

However, a deep ditch has been created near the Eastern Gate of the Fort on the way to Cauvery Layout where more than 10-ft of waste water is collected. It has become a stink hole and no efforts have been made to clear the water. As the water-filled ditch is right next to the Fort wall, it continues to weaken the Fort foundation.

Even the cemeteries, dungeons for armours and other monuments are in a dilapidated condition. One can see cracks and wild weed growth in several other monuments.