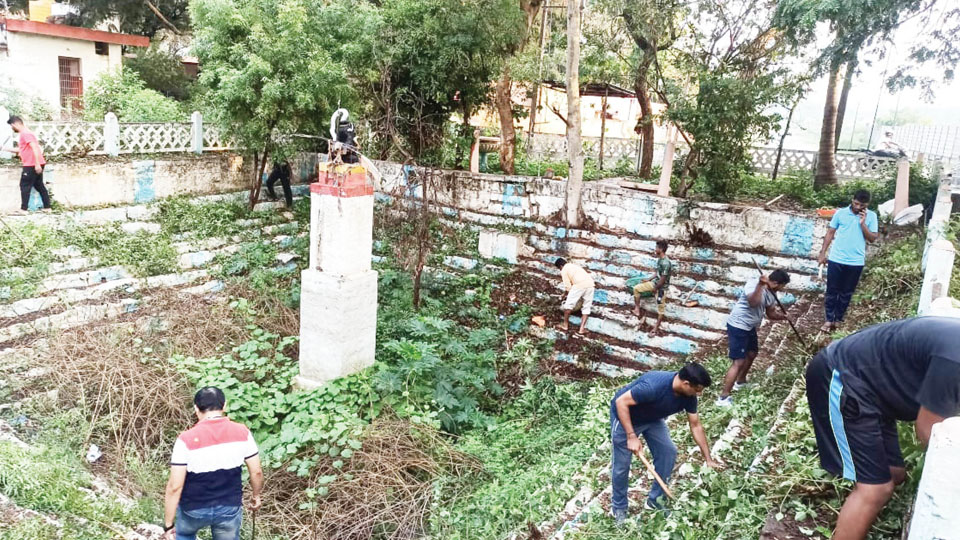 Mysore/Mysuru: Responding to Prime Minister Narendra Modi’s call to the nation’s youth to rejuvenate age-old Kalyanis, ponds and lakes to conserve water, the Mysuru wing of Yuva Brigade cleaned a closed Kalyani at the foot of Chamundi Hill on Sunday.

Surprisingly, after the cleaning when the middle portion of the Kalyani was dug up, breaking the concrete slab, water gushed out and within one hour, over one feet of water was collected.

The historic Kalyani is located on the way up to the Chamundi Hill near the burial grounds. The water body was covered with weeds and plastic and no one had bothered to clean it. Over 40 Yuva Brigade volunteers assembled there at 6 am and began a 12-hour cleaning operation. The deposited silt was cleared and two tractor-loads of mud were lifted.

The tractors were provided by the Mysuru City Corporation. According to historical records, three similar Kalyanis were built during the same period. While this Kalyani is located at the foot of Chamundi Hill, the other two are located at the premises of Suttur Mutt and at Madhuvana, the final resting place of Mysore Wadiyars. To increase the beauty of the Kalyani when it was full of water, someone had constructed a concrete pillar right at its middle. But in the enthusiasm of constructing the pillar, they had covered the water source with concrete. After the cleaning yesterday, the volunteers broke a part of the concrete pillar’s base with an iron digging bar and within seconds, water gushed out. Over one foot of the pillar was covered by water within an hour.