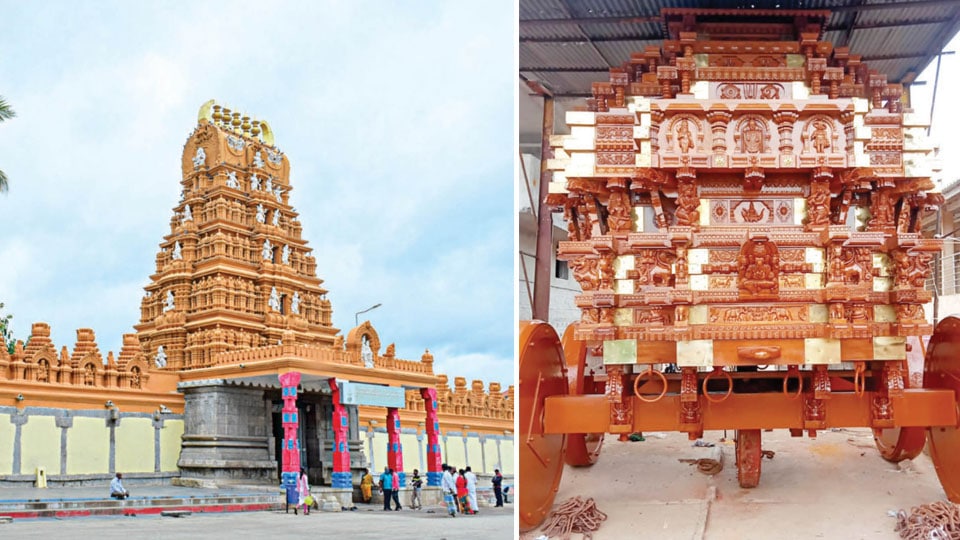 Newly built chariot to arrive at Chamarajanagar on May 13

Chamarajanagar: With the new chariot all set to arrive in Chamarajanagar on May 13, the famed Chamarajeshwaraswamy Rathotsava is almost certain to take place as scheduled on July 13.

The Rathotsava, which attracts thousands of devotees from various districts, was discontinued since 2017 after a portion of the big chariot was burnt by a miscreant when it was parked in front of the temple. The event was halted as it was generally believed that the usage of the burnt chariot was inauspicious. Now the important car festival is being held after a gap of five years.

The Congress Government led by Siddharamaiah had released Rs. 1.20 crore for the creation of the Ratha in 2017, following which it was built  by Bengaluru’s Basavaraju  S. Badiger at a cost of  Rs. 1 Crore, while the rest Rs. 20 lakh was used for construction of a shed to house the chariot.

This apart, the Chamarajanagar District Administration has spent Rs. 2.10 crore for renovation of the Chamarajeshwara temple. With the renovation of the temple, the authorities are making preparations for the conduct of Kumbabhisheka in June and also for the creation of a Mantapa inside the new chariot on the lines of Nanjangud’s Srikanteshwaraswamy Ratha.

Basavaraju S. Badiger, the maker of the chariot, said that most of the works in the making of the chariot has been completed and only polishing works remains pending. The polish works will be done after the chariot is brought to Chamarajanagar, he added.

Meanwhile, the District Administration and local people’s representatives are holding weekly meetings on Wednesdays to chalk out the modalities of the Rathotsava, which is being held after a gap of 5 years. On the other hand, the devotees and members of various organisations have started demanding that the Rathotsava (car festival) begin afresh from this year itself.