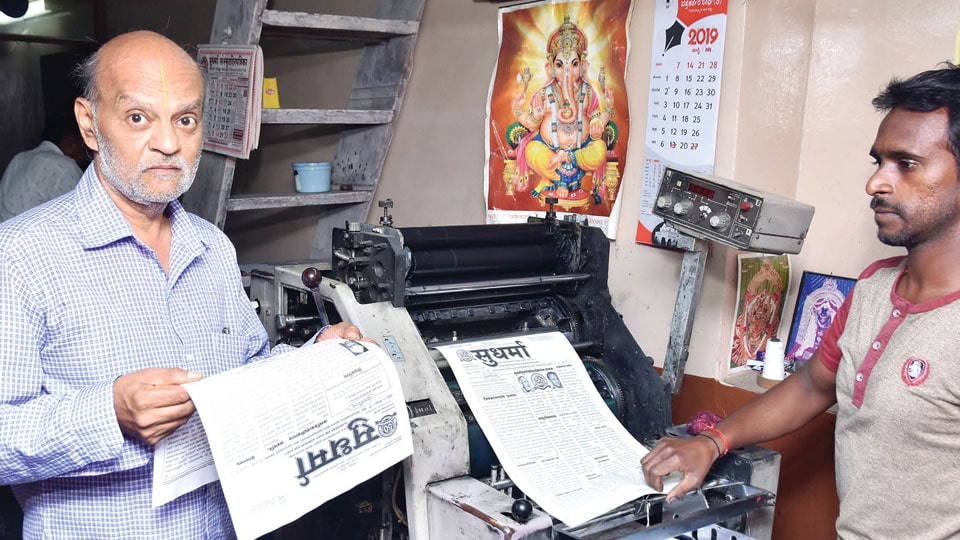 Many have declared Sanskrit to be a dead language. Though Sanskrit may be the least-spoken language in India, it is far from being done and dusted. Ethnologue, a reference work that provides information and statistics about living languages around the world, is providing ‘EGIDS level of 4’ which means that the language is in vigorous use and within the group of all living languages.

While there are numerous newspapers available in a plethora of languages, here is a Sanskrit Newspaper published in Mysuru, the World’s Oldest and probably the Only Sanskrit newspaper which is seeking attention from the Government for its very survival in its Golden Jubilee year. Yes, the ‘Sudharma’ newspaper published from Mysuru has turned 50.

“If somebody asks me why Sanskrit, one can give a long list of benefits but most importantly, I think, it is that the language opens up a new avenue to explore treasures of Sanskrit literature spanning over 2,000 years. And the knowledge one acquires is priceless,” says K.V. Sampath Kumar, Managing Editor of Sudharma daily.

Star of Mysore spoke to Sampath Kumar, now 63, at their decades-old-home-cum-press established in 1940s and he revealed a number of interesting facts and events related to the newspaper.

Sudharma is a mix of political, civic, sports and culture coverage. Reaching 4,000 print subscribers by post, the A3 size 5-column two-pager with a 47-year publishing history also has a ten-year-old electronic paper version that reaches 1.5 lakh readers internationally. It features news ranging from Government news to question papers. All these are available in Sanskrit language.

“All around the world, we are known as the only Sanskrit daily. Last year even ‘The New York Times’, under the title ‘Keeping Sanskrit Alive on Newsprint’ had carried the story about our efforts. Amitabh Bachchan, in his 10th session of Kaun Banega Crorepati’ had asked the question to participant, ‘What is the name of the world’s only Sanskrit Daily published since 1970,” reveals Sampath Kumar.

With his eyes shining with enthusiasm, he added, “as part of the Golden Jubilee celebrations, we have plans to bring out a special edition or a Souvenir of Sudharma, which will be released on Nov. 24 at Palace Grounds in Bengaluru. We have invited Prime Minister Modi for this event and we are hopeful and awaiting a positive reply from the PM’s Office.”

‘Srilipi’ is used to compose news and Sudharma is registered with news agencies and that news has to be translated into Sanskrit. “We need six to seven hours to bring out the issue — composing to printing. Both Sampath Kumar and his wife K.S. Jayalakshmi are proficient in Sanskrit and have an excellent command over the language. Sampath Kumar performs an all-in-one role: From reporter to Editor and Publisher.

A long battle for survival

Since its inception on July 15, 1970, Sudharma has successfully fought a long battle to survive against odds. Remembering his father Geervana Vani Bhushanam Vidhyanidhi Kalale Nadaadur Varadaraja Iyengar who started the Sanskrit daily 50 years ago, his son Sampath Kumar, who now has taken the responsibility of fulfilling his father’s dreams said “my father, Varadaraja Iyengar made all efforts to spread awareness about Sanskrit and started the newspaper to fulfil the high expectations of Sanskrit lovers. He was also instrumental in starting Sanskrit News in All India Radio.”

“Earlier, the language was restricted to one section of society. But this is not true. Anyone can learn this language which is part of our culture. People can subscribe to this newspaper that costs just Rs. 500 per year,” he said.

“Currently, circulation is 4,000 copies per day and online edition is also available, but with more number of subscribers and support from advertisers, I am hopeful that we can certainly reach a wider audience. From Kashmir to Badari and Rajasthan to US and Europe, we have readers from all over the world.” he added.

“My father was into publishing since 1940s. After we bought our own ‘Golding Jobber’ printing machine in 1956, we started publishing books and other materials, which we still continue to do other than our Sanskrit daily. In those days itself, we had done four-colour printing,” he reveals ecstatically.

Jayalakshmi has been the backbone of the publication, working tirelessly with her husband. “Every day, both of us are totally involved from typesetting and proofreading of the articles to making printouts and later pasting stamps and addresses to deliver the newspaper to households,” she explained. Now they have three assistants working for them who help in their daily tasks.

She also says that publication is planning to organise two programmes every month to promote Sanskrit where scholars will participate and educate the general public. But mere passion can take a venture only so far, and the couple are now seeking support. Their printing press named Sree Kantha Power Press, set up in 1945, was the first in Mysore to turn digitised in 1988.

They need one-and-a-half paper rim, which cost more than Rs. 1,000, to bring out one edition. Apart from paying the printing staff, they also spend money on maintaining machines. On an average, they spend Rs. 4,000 a day for paper, ink and printing.

Listing out many firsts in the history of Mysuru, post-Independence, when there was much debate about offering education to girls, Varadaraja Iyengar tried to break the taboo and started ‘Srikantha Samskruthi Sangha’ and started a school for girls in 1963.

He was also instrumental in starting the tradition of celebrating Sri Vedanta Deshika’s Thirunakshatra Mahotsavam in Sri Krishna, Varaha and Lakshmiramana temples located at Mysore Palace premises, which coincides with Dasara festival. Sri Vedanta Desika was a Sri Vaishnava guru/ philosopher. The great saint is considered to be divine bell of Tirupati Venkateshwara and his 750th birth anniversary was celebrated last year (2018).