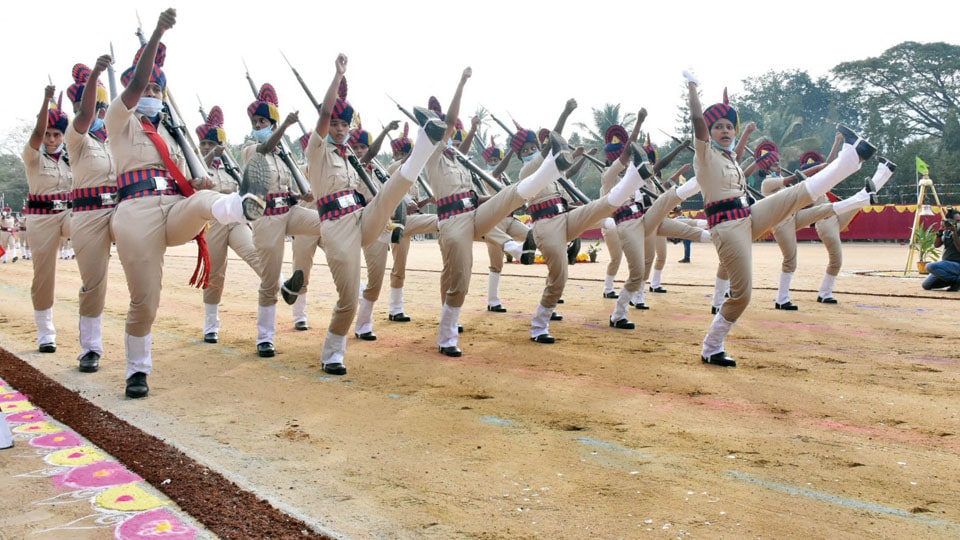 Out of 242 probationers, 2 are Engineering Graduates, 26 Post-Graduates and 181 Graduates

Speaking after receiving the Guard of Honour, IGP and Karnataka Police Academy (KPA), Mysuru, Director, Vipul Kumar said it is a matter of pride that Karnataka Police have a special place in the country for its service to society.

Asserting that training is a continuous process, Vipul Kumar said that the life of a Policeman or a Policewoman may become different after joining the Police force and every personnel in the force should keep on learning the nuances of the Department continuously.

Maintaining that Police duty is a great service to society, the KPA Director said that it is a proud moment for women as a Woman Commander has led today’s parade.

“Perhaps for the first time in the State, a Woman Commander has led the Parade. Leadership starts from day one of joining the Police force and more women should develop good leadership qualities and skills,” Vipul Kumar said.

READ ALSO  IGP boosts self-confidence of Police in his tweet

Reflecting on the role of the Police post the outbreak of the deadly COVID-19 pandemic last year, he contended that the service rendered by the Police during this crisis is a remarkable one.

Calling upon the passed out probationers to concentrate on maintaining their health too apart from their duties, he stressed on the need for all Police personnel to stay fit always, both mentally and physically.

Vipul Kumar also asked the parents of the Police personnel to extend full co-operation to their wards in their departmental duties and family life.

Basavva Vaggar of PTS  was the Commander and T.S. Kusuma of CAR was the Assistant Commander of the Peel-off Parade.

The probationers included two Engineering Graduates (Divyashri, a BE in Electronics and Communication and K.B. Ashwini, a BE in Computer Science), 26 Post-Graduates, 181 Graduates, one Diploma in Nursing and 32 PUC, with the minimum qualification being a pass in PUC. S.K. Bhavani of PTS and M. Anitalakshmi of CAR  were declared the Best All-round Probationers, while Umadevi of KSISF was declared the Best Probationer.

In the Rifle Shooting category, H.R. Leelavathi of PTS and Sushma Patagar of CAR bagged the first prize, Safina of PTS and Kavitha Poojari of CAR, second prize and Bhagyashree of PTS and K.T. Akshata of CAR, third prize.

In the Outdoor category, K.Chaitra of PTS and C.R. Mamatha of CAR  bagged the first prize, Basavva Vaggar of PTS and T.S. Kusuma of CAR, second prize and B.B. Bhavya of PTS and P. Chaitra of CAR, third prize.