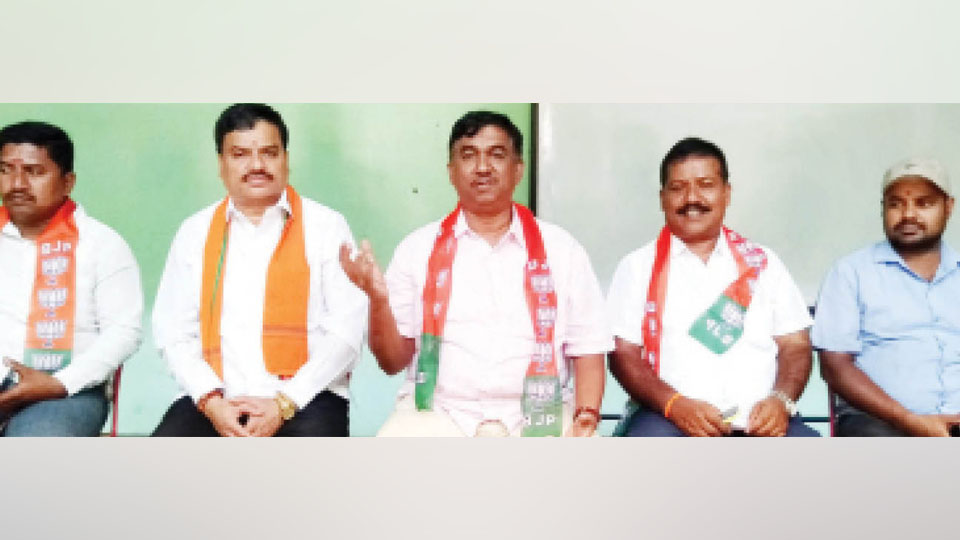 T. Narasipur: Claiming that the people of the State are fed up with the maladministration of JD(S)-Congress coalition government in the State, senior BJP leader Raghu Kautilya appealed the people to support the BJP in the Lok Sabha (LS) polls and thus throw out rampant nepotism practised by coalition partners.

Addressing a press meet at Veerashaiva Students Hostel at Vivekanandanagar on Wednesday, Raghu said that the electorate should teach a lesson to coalition partners in the LS polls.

Maintaining that several Congress-JD(S) workers who were upset with the coalition are indirectly supporting BJP candidates is most of the Constituencies, he said that the independent candidate in Mandya has been supported publicly by coalition leaders and workers.

Continuing his tirade against the coalition JD(S)-Congress government, he said that the people should teach a lesson to the coalition leaders by voting them out in the LS polls.

He said that senior BJP leader and Chamarajanagar LS candidate V. Sreenivasa Prasad would become a Union Minister if elected, he appealed the electorate to vote for Prasad for the all-round development of Chamarajanagar.

Pointing out that it was Yeddyurappa who made Valmiki Jayanti celebrations official at the State-level,  Appanna maintained that the NDA government is committed towards inclusion of Parivara and Talawara Sub-castes to ST list.

He appealed Nayaka Community to vote for BJP candidates in all LS seats.