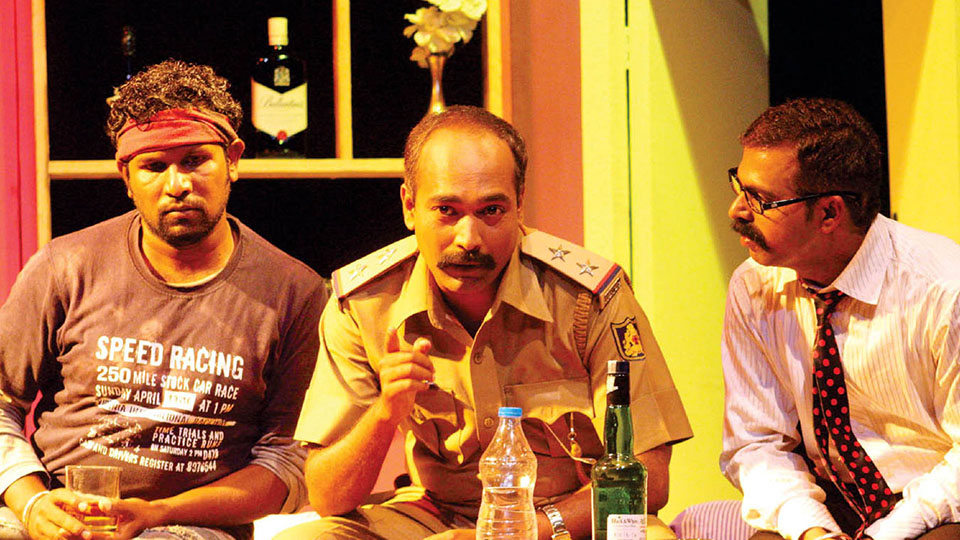 Mysuru: The ‘Virtuous Burglar’ is one of Italian actor and playwright Dario Fo’s best known farces. Rangavalli, an amateur theatre troupe from Mysuru, will  be staging the comedy play ‘Samsaradalli Sanidapa’ based on K.V. Akshara’s translation of ‘Virtuous Burglar,’ directed by Raviprasad.

The play, which will be staged on Apr.13 at Mini Theatre in Kalamandira premises in city, is of one-and-a-half hour duration.

The play is set in the contemporary time and deals with the consequences of a burglary which starts out badly and just goes downhill from thereon. The burglar breaks into the flat of a well to do man. But whilst he is “at work,” his wife rings him and nags him as only a wife can nag a husband. Then, to make matters worse, the owner returns unexpectedly, bringing with him his lover. One by one, various people enter the flat without knowing what exactly is happening and who is involved with whom.

Eight characters locked in a flat that they would each prefer not to be in are tangled in a web of marital intrigue that would take quite a few spiders to spin.

Bangalore Theatre Collective will be staging the play ‘Ondu Preetiya Kathe’ (based on Vijay Tendulkar’s Mitrachi Goshta) at Mini Theatre in Kalamandira premises on Apr.14.

The first play in Kannada to discuss the homosexuality of a woman is directed by Venkatesh Prasad.

Synopsis: The play foregrounds a young girl, by name Preethi and the life-changing moments in Preethi’s struggle to cope with being “different.” The intriguing play is set in a college and is a stark commentary on love.

The play focuses primarily on Preethi’s love affair, but narrated through the eyes of her friend, Ajay, the central character. Their friendship goes through a succession of quick, dramatic growth spurts that reveal the complexity of friendship and show that Ajay ultimately comes to represent: a homophobic society that keeps its blinders on to naturalise straight relationships as the norm.

The gradual unravelling of her sexuality, her confusion regarding her sexual identity, her violent attraction towards her love and the blossoming friendship between her and a male friend, form the central points of the play. The play is weaved into a complex character with intricate plotlines that break the taboo on lesbian identities.