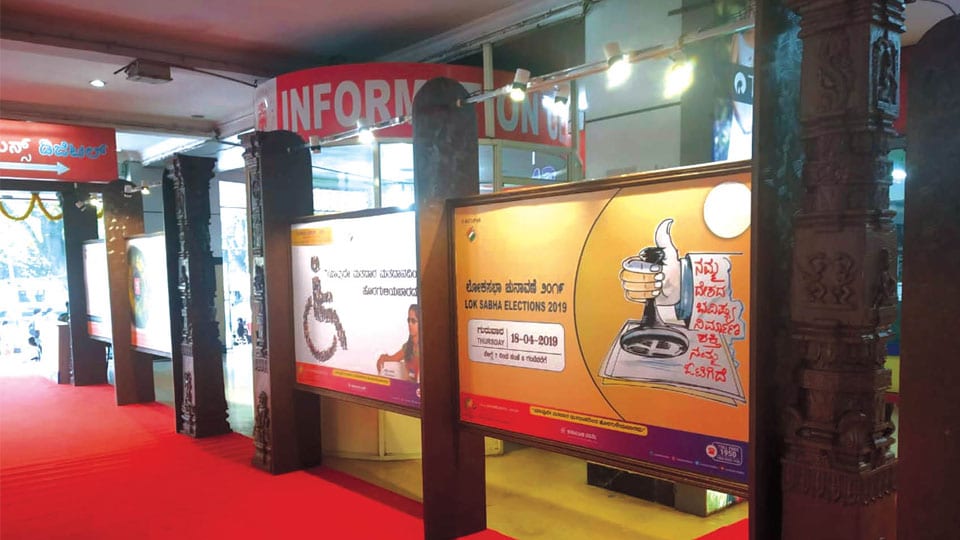 Mysuru: Systematic Voter’s Education and Electoral Participation (SVEEP) was launched by Election Commission of India in 2014 to inform, motivate and facilitate voters and in turn make Indian democracy more participative and meaningful. Taking it to new meaningful heights during this election and in order to increase voter turnout, more and more innovative programmes are being organised by SVEEP committees.

In this direction, SVEEP committee has launched a poster exhibition at city’s Suburban Bus Stand to create awareness about compulsory voting. The poster has been displayed in front of the ticket counter at the bus stand. This three-day awareness programme was inaugurated by Zilla Panchayat Chief Executive Officer (CEO) K. Jyothi while Mysuru City Corporation Commissioner Shilpa Nag and Additional Deputy Commissioner (ADC) G. Anuradha were present here on Wednesday.

Speaking on the occasion Jyothi said, the first phase of polling is approaching in the State and will be held on Apr.18. Hence, in order to see that more people vote, a lot of steps have been taken. Through street plays and creating awareness among the student community in colleges, the importance of voting is being stressed, she added.

The volunteers are going house-to-house in rural areas and asking the voters to compulsorily vote. The PDOs (Panchayat Development Officer) and Gram Secretaries are putting up stickers and distributing pamphlets and bringing to the notice of the rural people the importance of voting.

ADC G. Anuradha said that with the assistance of Information and Publicity Department and Transport Department, an awareness programme has been chalked out. The poster exhibition has been organised to create awareness about compulsory voting.

The Suburban Bus Stand is teeming with rural people and in this light, the three-day programme has been organised. Staff has been deployed to create awareness about voting, voting booth and other issues to the travellers, she added.

MCC Commissioner Shilpa Nag said during the last election there was 65 per cent voting in the district. However, in the city, it was only 57 per cent. Hence, to increase voter turnout, various programmes have been organised.

If the voters do not have Voter’s ID, then, as the Election Commission has directed, they can bring any one of the 11 ID proofs and cast their votes and besides information can be obtained from ‘Chunavana App,’ an Android App, which gives the information related to Election 2019 for citizens of Karnataka, she explained.