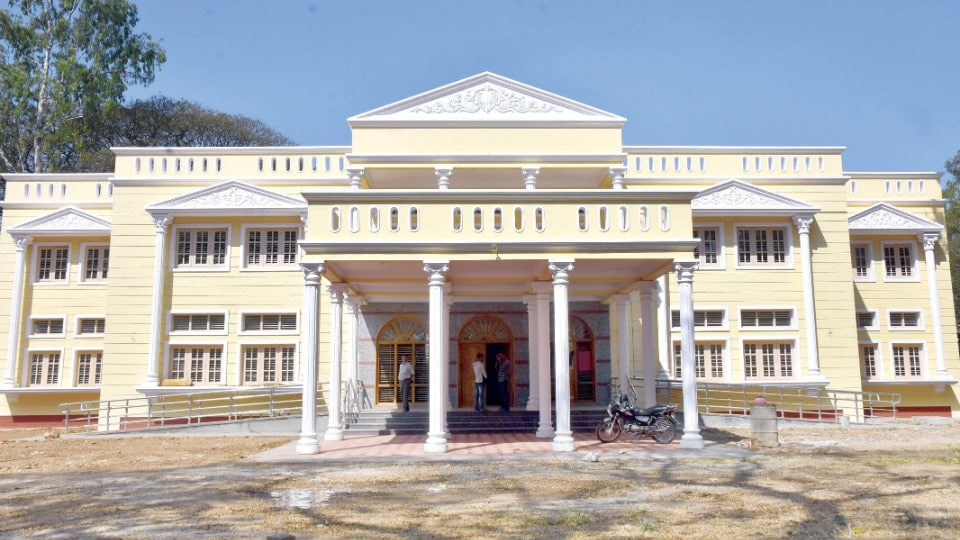 With the civil works of the two-storey building of the new Library that has come up at People’s Park in Nazarbad opposite  KSRTC Sub-urban bus stand completed, the new Library is now awaiting inauguration.

The 1809 sq.mt building has come up on a 340ft x 400 ft. plot in People’s Park at an estimated cost of about Rs.5 crore. Although the civil works are over, the interior works are yet to begin.

The construction of the building was started years ago with Government funds, but later on works came to a standstill as the MCC delayed remittance of Library Cess which it had collected from citizens. Now, with the civil works complete, the electrical works are going on.

The building is secured by a huge iron wall and a big gate has been installed at the main entrance to the building.

The ground floor of the building will house a section for the specially-abled and visually-challenged, women’s section, computer room, book stock room, circulation and reference sections, newspapers, magazines sections and two store rooms for office usage, keeping documents and old newspapers/ magazines. This floor has wash rooms, toilets for the specially-abled and other civic amenities such as drinking water. The Floor will also have exclusive sections for students preparing for competitive examinations, children and senior citizens.

The first floor of the building will house the administrative office, the Chief Librarian’s cubicle, a mini-conference hall, Technical sections and office for different divisions. It will also have an open mini auditorium, much like the ones in Conference Halls elsewhere.

Department of Libraries Deputy Director B. Manjunath said that the First floor of the building will also have civic amenities such as drinking water, toilets, Records room, Stationeries room etc. The Library will provide conference halls to writers of the city to host events like book release or seminars at a very nominal price, thus promoting them and their works, Manjunath added.

The second floor will also house an Open Reference Hall where colourful umbrellas will be installed like in hotels and the visitors will be able to read books in a natural atmosphere under the shade of the umbrella. Apart from this, the new building will have a kiosk where one can get information about tourist spots in and around the city and as well as information about all other branches of the library in the city.

Chairs will also be kept for the benefit of the visitors at the Open Reference Hall. There are plans to install a solar system for attaining self sufficiency in power and the Library department is in touch with CESC authorities in this regard. Also plans are afoot to build a beautiful landscape and lawn in the vast space in front of the building, where it is intended to grow medicinal and herbal plants, according to Manjunath.

Continuing, Manjunath said that with civil works over, the next task is to get funds for interiors, which is estimated to cost Rs.4.5 crore. The MCC has given Rs.3 crore for the same and has promised to give the remaining amount needed in April, out of which interior design and other necessary infrastructure such as computers, books etc. will be procured.

Even as the Library Department is keenly awaiting the inauguration of the new building, the Department has already planned what it should do in the over century-old old building on Sayyaji Rao Road. The Department after deciding to retain the old building as it is, will use it for Literary purposes. Poet Laureate Kuvempu used to frequent the Library in his college and later days and the Department took a decision in 2015-16 to retain the building in its present form. As a mark of respect to literary greats such as Kuvempu, who had virtually made this Library their second home,the Department will dedicate the old building on Sayyaji Rao Road for literary works and Kannada books. The Department plans to move 50 percent of the books it has at the old building to the new building, where books for competitive exams will be made available for students and aspirants. As the old Library attracts hundreds of newspaper readers every day, the newspaper section will be retained in the old Library Building along with Kannada books and literary works, Manjunath said.

Library Training School likely to come up in old building

With the old Library likely to get ample vacant space once most of the books are shifted to the new building, the Department plans to open a Library Training school in the old Library facing Sayyaji Rao road. The Department is mulling introduction of a Certificate course in Library Sciences for SSLC and PU passed students. Already, such Schools are functioning at Bengaluru ,Kalaburagi, Davanagere and Mangaluru and Mysuru will be the fifth city to get one. A proposal has been sent to the Government in this regard and the Department is awaiting Government approval, Manjunath said and added that initially only the Certificate Course will be introduced.