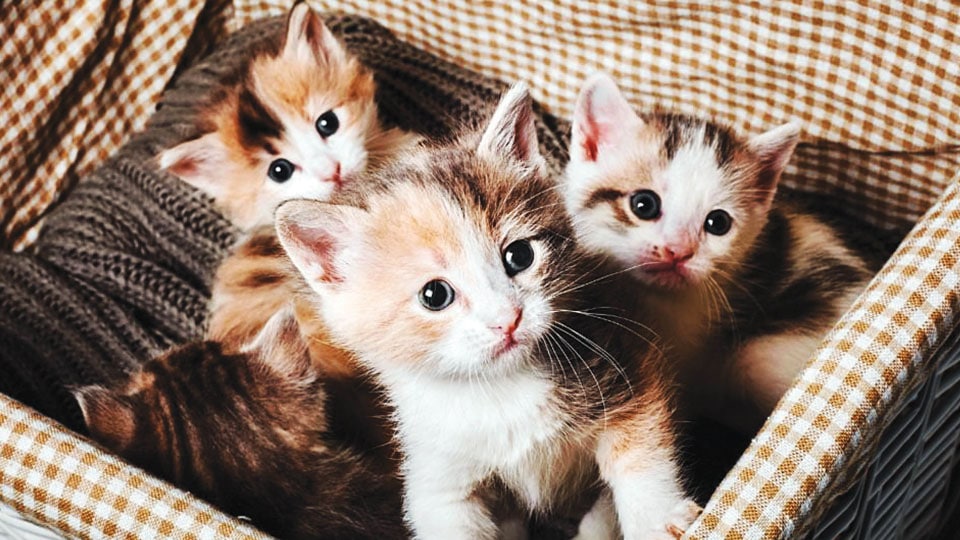 In this week’s Pet Talk, Maneka tells how to take care of abandoned litter of kittens

What are the symptoms of rippling skin?

Loud and Insistent “Worry” – Meowing – Cats afflicted with this syndrome may also meow loudly for no apparent reason, often at night.

Strange Eye Appearance – Pupils may become dilated, and they may stare blankly into space; the eyes may appear glassy.

Erratic Racing – The cat will often run in circles or race off, first in one direction, then another.

Sensitivity to Touch – A cat affected with this disorder may sometimes show extreme sensitivity and discomfort from petting and any physical contact on the skin.

It is not surprising that a condition with so many anxiety-like symptoms also includes a number of anxiety-inducing causes ranging from dietary or environmental toxicity to acquired allergy or over-sensitivity, to a compulsive habit in an attempt to self-soothe.

The alert caretaker may benefit from using a calendar in order to document the day-to-day or week-to-week frequency of each of these anxiety behaviours, as each might seem “normal” if seen infrequently or one at a time.

What are the causes of rippling skin?

Pansteatitis (Steatitis, Yellow Fat Disease) – Pansteatitis is a disease caused by an excess of unsaturated fatty acids, combined with a lack of sufficient Vitamin E. It is most often caused in cats by frequent consumption of red tuna, and some experts have blamed it on non-nutritional homemade diets. The resultant “sick fat” deposits can be very painful to cats.

Brain Involvement – Particularly with FSH cats displaying seizures, a potential brain infection, skull trauma, or tumours should be investigated by a veterinarian.

Flea Allergies – Itchy skin due to flea bites could be cause for erratic behaviour in cats, and this potential cause should be relatively easy to rule out by examination of the skin under the coat.

Rippling Skin Disorder will most likely be seen as a form of OCD (Obsessive-Compulsive Disorder) or as a stress-related condition, and there are appropriate dietary, environmental, and behavioural steps that can be taken in such cases.

What is Feline Immunodeficiency Virus (FIV)?

FIV is from the same family as the Human Immunodeficiency Virus (HIV) that causes AIDS, but it only appears in cats. Although it can be fatal if left untreated, a positive test for FIV is not a mandatory death sentence for your pet. With a high-protein diet and aggressive treatment of secondary infections, an FIV-positive cat can lead a reasonably normal life for several years after diagnosis. FIV is transmitted by deep bite wounds (saliva to blood), or during gestation (blood to blood), and cats are more likely to die of secondary infection or other causes because of their compromised immune systems. However, many cats may live normally for years before they become ill.

Why is my cat biting?

Some cats bite to stop unwanted action or behaviours by humans or other animals, especially if this was effective in the past. For example, if they previously bit while having their nails trimmed and then the nail trimming stopped, they may have learned that is an effective tool. Some cats bite as a form of communication or demand for attention. Instead of meowing, they bite. If a cat nips you and then tries to lead you to an activity, such as playing with a toy, this could be the reason.

Why do cats bang their forehead on humans?

How to stop your cat from chewing electrical cords?

Consider wrapping cords in rubber covers that can be purchased at most stores that sell electrical and home repair supplies. Putting the cords inside PVC tubing is also an option. You can also rub them with a citrus scent, which cats dislike and will avoid.

How to trim your cat’s nails?

Begin by gently petting its paws while simultaneously petting the cat in its favourite spots. Do this for each paw you plan to trim. Whenever you handle your cat’s paws, reward it with treats and praise to help build positive associations. Place your hand over the cat’s paw, and then flip your hand around so the bottom of the cat’s paw is on the palm of your hand. Keep rewarding the cat with petting and treats; give the cat a new, special treat that will only be associated with cutting its claws. Gently        massage your fingers over the tops and bottoms of each paw you plan to trim.

Why does my cat hiss and growl?

A cat who is growling, hissing, or spitting is a clear sign that the cat is agitated, frightened, or angry about something. When your cat growls and hisses, he’s effectively saying, “Back off now, or else.” Usually, a growl is just a warning and he won’t attack. Growling is often accompanied by hissing along with possibly arching his back. The point is to make him sound and look fierce enough that whatever is bothering him backs off.

What should I do with abandoned litter of kittens?

Don’t assume that a litter of kittens is orphaned just because you don’t see the mom. It’s common for the mother to leave her babies, so give the kittens a bit of distance and see if the mom returns. If she doesn’t return within an hour or two, it is time for you to step in and help.

Bringing an orphaned kitten to a shelter is a death sentence. The majority of shelters do not provide care to unweaned kittens, so if you want them to live, it’s going to be your responsibility to help them yourself, or to find someone who can. Think about their immediate needs, if you observe any serious health concerns, such as gasping for air or bleeding, take the kitten to a veterinarian. You’re going to need to quickly gather supplies so you can get them warm, stable, hydrated, and fed. Kittens cannot control their body temperature, so help them regulate their body temperature before trying to feed them — especially if they have been exposed to cold temperatures. A heating pad on low, a warm water bottle, or even a sock filled with rice and put in the microwave can all provide a steady but mild heat source to a cold kitten.

What is Feline Hepatic Lipidosis?

Feline hepatic lipidosis, also known as feline fatty liver syndrome, is one of the most common forms of liver disease of cats. The disease officially has no known cause, though obesity is known to increase the risk. The disease begins when the cat stops eating from a loss of appetite, forcing the liver to convert body fat into usable energy. If this process continues for too long, fat builds up in the cells of the liver, and the disease has officially onset.