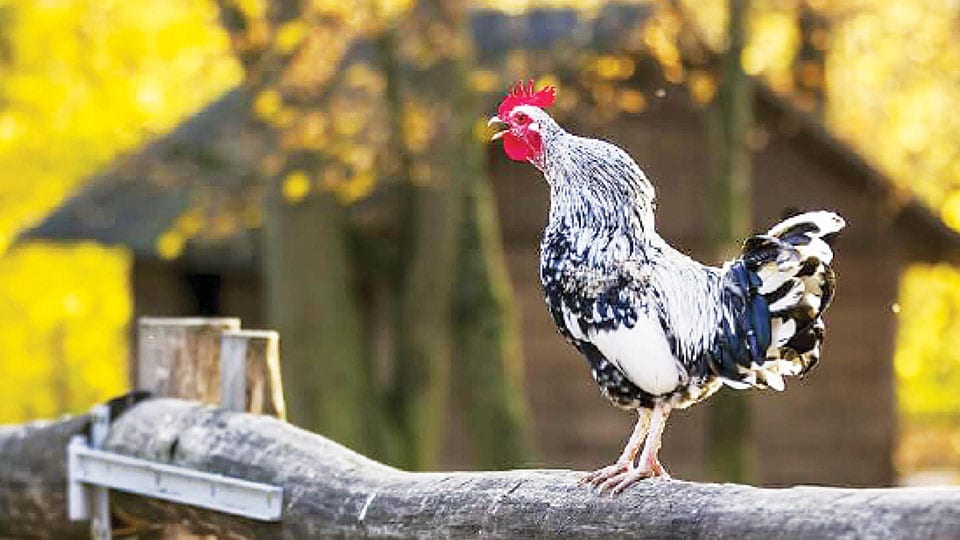 They make absolutely wonderful pets (if  you hand raise them and handle them gently). They are pretty low maintenance and are very intelligent. Curious, brave, timid, loud, bossy, friendly or standoffish, chickens have just as much personality as humans. From the way they walk, run, take dust baths, lay out, cackle and chase bugs. They are a constant source of laughter. They don’t defecate in the house or give you half eaten prey. If they kill an insect, they are going to eat it themselves but at least that is less feed you have to give them.

How do you know when a chicken is unhappy?

When chickens are feeling awful, in pain or sick, they are perfectly silent and motionless. A very sick and depressed chicken will sit for hours facing a corner of the coop or run. A chicken in pain will stand in one spot for hours with their tail pointing to the ground.

Can you potty train chickens?

Difficult but it has been done. You can keep chickens indoors, however.

Is there any chicken language?

They are very vocal and conversational. And if you pay attention, you can learn to understand and speak their language too.

Pleasure peep: A soft, irregular chirp that says “I’m here and all is well.”

Crowing: No explanation needed. It says “I’m the boss here.”

Other sounds that chickens produce include the “cackle” hens make after they have laid an egg. A broody or dominant hen can issue warning to others to stay away.  All chickens will squawk when they are disturbed or hurt: for instance, hens in battery farms sometimes moan all day in misery and from excessive stress.

Do chickens have teeth?

Chickens do have teeth (a tooth), but they are only temporary. When a chick hatches, they possess what is known as an egg tooth. It’s a single triangular piece of bone attached to the end of the beak, which provides assistance with pipping out of the egg, since their beaks are relatively soft in the first week or so. The egg falls off within two or three days, since it is no longer useful. Most reptiles and all birds have these egg tooth.

I am a vegan but I have pet hens that lay eggs.  What should I do with them?

Offer them to friends and family. That way they’re not eating eggs from battery hens, but eggs from hens kept lovingly as pets. Better than wasting them. No male, no chicks. Or even better. Cook them and give them to the street animals in your area.

Which is the best source of protein in a vegan diet?

Lentils, beans, soyabean are the best protein options in a vegan diet. The human body needs very little protein — about 8-10 gms a day. You can get that in any             vegetarian food: even potatoes.

Why is vegan diet considered healthy compared to non-vegetarian diet?

Several studies have reported that the vegan diet contains more fibre, antioxidants, potassium, magnesium and vitamins A, C and E. Vegan diet is full of essential nutrients. Non-vegetarian diet has an excess of fats, cholesterol and is full of diseases because of the way the animals are reared and killed. It is very easy to be vegan in a country which has 500 species of vegetables.

Why do pigeons bob their heads?

When researchers in a study reviewed slow-motion footage, they found that there were actually two main parts to a pigeon’s head movement, which the scientists called a “thrust” and a “hold” phase.

In the ‘thrust’ phase, the head is pushed forward, relative to the body by about 5 centimeters. This is followed by a ‘hold’ phase, during which the head is kept still in space, which means that it moves backwards relative to the forward-moving body. What we see as a “bob” is the head sliding smoothly forward and then waiting for the body to catch up. We perceive it as a bob because the motion unfolds so rapidly.

Head-thrusting helps pigeons to stabilise their view of the moving world around them. Keeping the head still in space during the ‘hold’ phases means that the image will not be blurred by motion.

In other words, a stationary head gives the bird a moment to visually process its surroundings while it waits for its moving body to catch up; it’s like hitting pause on the motion for a fraction of a second. This tactic is useful because it enables them to see potential food — and possibly, enemies.

If pigeons’ heads moved at the same pace as their bodies, they would have trouble keeping a stable image of the world on their retina.

Most baby songbirds are in the nest until they are fully feathered and as big as the adults.

However, to be fair, there are a few reasons for such infrequent sightings of baby rock pigeons in particular: Their nests tend to be out of view, on rooftops and other skyscraping venues such as bridges and the sides of high-rises; pigeons spend a longer time as nestlings than other birds; and pigeon babies grow up, at least appearance-wise, faster than other birds.

Whereas most songbirds spend two to three weeks in the nest, pigeons hang out for at least three weeks and up to six weeks in the comfort of the nest. By that time, the juvenile pigeons look more like adults than other birds when they leave the nest.

If you keep an eye out though, you may be able to spot these young ones: Look for feathers that aren’t completely molten, dark eyes (adults have red-orange eyes) and tapered primary feathers (the longest feathers on the bird’s wing).

Our Municipality head says that pigeons are responsible for spreading diseases like tuberculosis and cancer. Is this true?

It is complete nonsense. There have been thousands of studies done on this because, for some unknown reason, when Municipalities don’t want to solve real issues, they invent issues to frighten people. The sight of people feeding pigeons irritates bureaucrats and they are always making false and illiterate accusations. In no study anywhere in the world have pigeons been found to spread any disease at all. I have taken plastic hanging flowerpots which nurseries sell and hung them from my verandah ceilings. They are lined with newspaper. The pigeons have made homes in them and I love the sound of their cooing which is so relaxing.

How can illegal breeding of animals be put to a halt?

Refuse to entertain breeders who breed animals unethically. Report them on any social media site that you come across and let any animal welfare NGO know immediately about their activities. Click pictures for evidence and call the Police, file a case against the perpetrator; You can also approach the Court to file a case, if nothing else works out; The first step, however, is to be aware about illegal breeding and legal breeding.

What are some pet shop/ breeder laws that the common public must know?

It is be mandatory for all pet shop owners to register themselves with the State Animal Welfare Board of the respective State Governments/ Union Territories.

Such shops are registered only after inspection by the representatives of State Board, a veterinary practitioner and a representative of the Society for the Prevention of Cruelty to Animals. The rules define space requirements for birds, cats, dogs, rabbits, guinea pigs, hamsters, rats and mice in the pet shops. It defines the basic amenities, power back-up, general care, veterinary care and other operational requirement for animals kept in pet shops.

The rules make it mandatory to maintain proper records of sale, purchase, death of animals in pet shops.