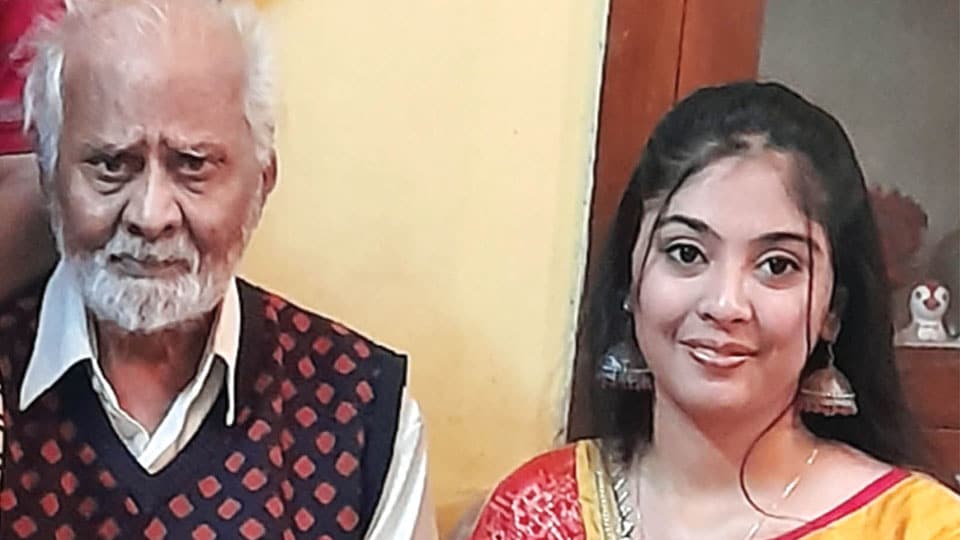 A grand-daughter connects with her nonagenarian grandfather Mohammed Nizamuddin, a trend-setter of football in Mysore State

Indians have seen many names coming forth. It could be in the field of science, technology, freedom struggle, sports etc. — few known, few unknown and a few remained in oblivion.

One such sportsman was a young boy from Kolar, my grandfather Mohammed Nizamuddin, who was a terrific football player and was the trend-setter of football in Karnataka, then called the Mysore State. He played and won many matches. Now as a nonagenarian, he is leading a simple life as a retired Tahsildar, enjoying his success in life with utmost gratitude faraway from fandom.

It was a normal day. Out of boredom (lockdown effect) I just thought of talking to my grandfather about his football days. But looking at the sparkle in his eyes and hearing his excited voice, my time-pass conversation became one of the most enlightened high voltage story-telling session. He began with his life as a kid who played football as a mere game, but it was in his teens that football became his passion. He started playing for his University first and then for his State.

Born on June 20, 1929, his football career as such started with Mysore University, where he was the captain of his football team and he, along with his team, won many trophies. His University Professors and those who used to see his matches started encouraging him. He was also much appreciated among his team members and slowly his popularity began to grow.

Looking at his skills, a well-known team of Karnataka at that time “The Bangalore Blues” approached him and he became a part of that team. As the saying goes “It takes a right moment to strike”, that moment in my grandfather’s life came as an opportunity to play the Santosh Trophy for his State (then Mysore State).

Santosh Trophy is a State-level Football Tournament where many States participate. My grandfather played for the Mysore State. Mysore State in 1956 had won this trophy after a wait of 6 long years. The State was playing well and had entered the semi-finals. It was an interesting nail-biting match. The match was against Orissa (now, Odisha) and Mysore State (now, Karnataka) won by two goals — both scored by my grandfather (Lo, a new star was born in Mohammed Nizamuddin).

Then came the finals. As usual there was a lot of expectancy from the star goal scorer. The match was against Bengal (a very strong team of that time). Mysore won by a goal (again a right goal at right time) and guess what? That one winning goal was scored by none other than Mohammed Nizamuddin.

After six years, Mysore had finally won the Santosh Trophy and so the celebration went on for days. He became a sensation among the youths, who copied his walking style and waited for hours just to shake their hands with him. Such was his euphoria. He also played for the Netaji Club in Mysore.

In 1956, Mohammedan Sporting Club made a major come back in the Rover’s Cup. They won the trophy after a gap of 12 years and Mohammed Nizamuddin was responsible for the major goals scored, which led to the lifting of the Rover’s Cup in 1956 and 1959 matches.

Throughout his career span of 15-20 years in the national football, he had come across many people from different backgrounds like general public, celebrities etc. and not to forget the numerous countries he has visited. All of these have had a great influence on him (he keeps telling me and my sister about the different places he visited, their culture etc.). For great achievements it requires great support too. One such strong pillar of support to my grandfather was his father Abdul Razaq. Along with his father, there were many people like his University College Principal, his Professors, his coaches etc., who encouraged and supported him to the fullest. They played a key role in his success too and he is forever grateful to them.

In the 1960s, he gracefully retired from his football career. A very simple man with simple but strong principles, he never took his celebrity status to his head. He did not crave for limelight instead he opted for a simple life as a Government servant (Tahsildar) and discharged his duties with utmost sincerity.

Even today, when he looks back at his life, he says with pride in his eyes that he was neither dependent nor a burden to anybody in the family and that God blessed him with the best.

A BA graduate from University of Mysore, Mohammed Nizamuddin served as Tahsildar in many places including Gundlupet, Yadgir, Sullia and Malavalli. After his retirement, he served as Estate Officer of WAKF Board in Srirangapatna.

His wife passed away 9 years ago. He has 4 children (1 son and 3 daughters). He stays in Bannimantap A Layout in Mysuru with his son, daughter-in-law and two grand-daughters.