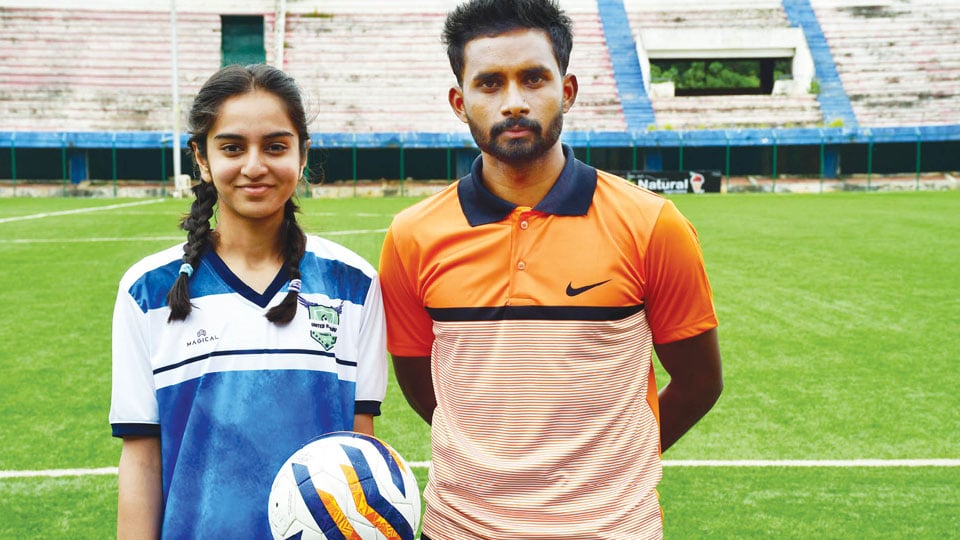 Football: A Man’s Game? No

Kodagu, the land of coffee has a girl’s football club now and it has already made a mark in the on-going prestigious ‘A Division’ League matches being held in Bengaluru at Bangalore Football Stadium. In all, 17 teams are participating in the matches and prominent among them is United Kodagu Football Club, exclusively for girls.

This is the first girls’ Club registered with a Kodagu name in it and has been floated by H.H. Harish, a football player himself from Pollibetta in Kodagu. Harish is an All India Football Federation licence holder to coach future players.

Among the players in the Club is 19-year-old C.V. Niharika from Saraswathipuram in Mysuru, presently studying in National Institute of Engineering (NIE) pursuing Mechanical Engineering second year. As of now, there are only two players from Kodagu — Nikhita from Somwarpet and Parimala from Pollibetta.

“There are at least 30 to 40 girl players from Kodagu who are interested and capable of playing in league matches. In the pandemic situation and due to examinations and other family commitments, they are not able to come to be a part of the Club in these league matches. I have registered with the United Kodagu Football Club so as to not miss out on the league matches. If the Club fares well, we will conduct a trial in Kodagu for the subsequent matches,” Harish told Star of Mysore.

Lending a helping hand to Harish is Kodagu District Football Association. “The United Kodagu Football Club is taking care of the food and accommodation of the players and the team is poised to enter the semi-finals,” Harish said.

He is the Head Coach of the Bengaluru-based Nakshatra Football Academy and the other players have been handpicked from there, he said.

“Hockey takes priority in Kodagu but there are girls who are interested in football and so far they have not had any opportunities. We provide a platform for them and the ‘A Division’ was a good opportunity for them to learn and hone their skills from other State-level players,” Harish added, regretting the lukewarm response he got when he called for player participation. He hopes that more players will emerge from the coffee district.

Sharing her experience with SOM on playing for Kodagu FC, Niharika said that she was glad for the opportunity and grabbed it as soon as the opportunity landed on her lap. “I am the only Mysuru girl to be playing football at this level and I practice for at least three to four hours per day,” she said.

Niharika started playing football at a very young age and her class boys were her team-mates. “Football is the only game that attracted me and I felt I belonged to it and it was quite natural. Despite facing obstacles and discrimination initially as there is a wrong notion that only men play this game, my parents were very supportive. And here I am,” she said.

Notably, Niharika’s coach in the University of Mysore is Ramani, a woman who coaches all the senior boys. “She picked me up and took me under wings and it was a magical moment,” she added.

Niharika is the daughter of Dr. C.S. Vasanthakumar, a medical practitioner and C.P. Manjula, who was an Assistant Professor Economics, now a home-maker.

Team makes it to Main League

In the ‘A Division’ League, The Kodagu FC could not make it to the finals in the qualifiers. The team played its last match on Sept. 20 and qualified for the Main League that will take place later.