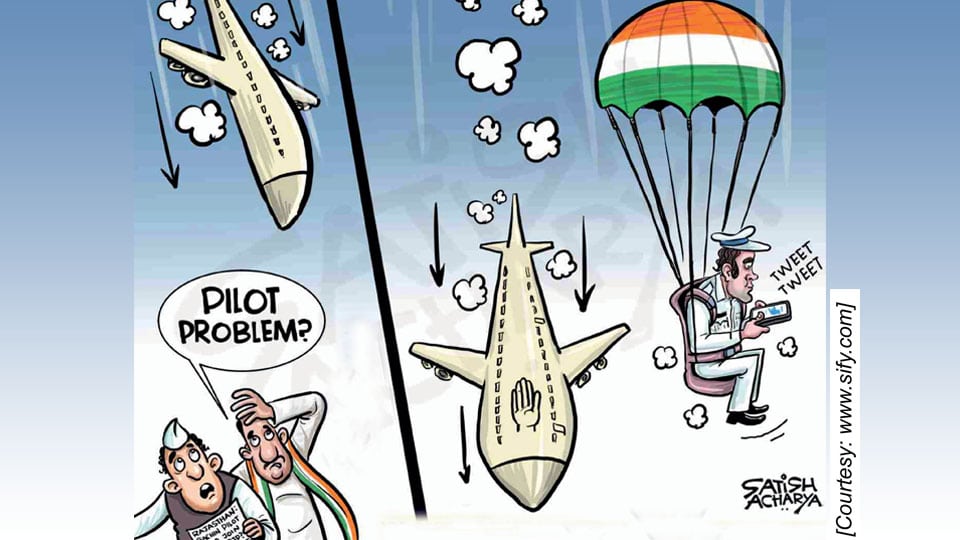 The Congress has ejected its Co-Pilot out of the cockpit in Rajasthan. Now everyone is waiting to see if Sachin Pilot lands safely on BJP’s lap or makes a hard landing trying to start his own party?

Meanwhile, the Congress party, still piloted by the Gandhis, is in nosedive and heading for a crash-landing as it steadily keeps losing young leaders in favour of old loyalists.

Speaking of political developments in Rajasthan, Congress party’s new recruit in Gujarat, Hardik Patel said, “In Congress you get to bat after fielding.” Let’s see how long Hardik Patel keeps fielding, while his ex-President keeps batting whenever he pleases, even if he is an incompetent batsman. Let’s see how much patience Patel will have as his ex-President keeps getting other batsmen in his team run out, while he continues to stay at the crease without scoring any runs. Let’s see how long Patel will stick around in the team as winning players are benched or turned into water boys.

Frustration is creeping in among competent Congress leaders. Many have worked hard, they have delivered and they want their reward. But in Congress, loyalty to the family is supreme, not performance. After Indira Gandhi became PM, ‘Chamchagiri’ to the family became a qualification and it mattered more than performance.

And Congress members go to great lengths to display this qualification. In 2004, Sonia Gandhi’s birthday was declared as “Tyag Divas”! And at the event, a Congressman said Sonia embodied the virtues of the Buddha, Ashoka and Mahatma Gandhi! This outpouring of blind devotion did not come from some ordinary fanatical party worker, it came from the then Union Home Minister Shivraj Patil !

Similarly in 1995, the Congress party renamed the two concentric roads in the heart of Delhi. Connaught Place and Connaught Circus were renamed Indira Chowk (the outer road) and Rajiv Chowk (the inner road). When asked why this renaming was needed, according to India Today report, the then Congress MP Mani Shankar Aiyar reportedly said, naming it Indira and Rajiv would figuratively mean “a mother embracing her son.” When an angry BJP MP asked in Parliament, “Kya yeh desh Indira aur Rajiv ki jagir hai?” (Is this country the fiefdom of Rajiv and Indira?) a Congress MP actually turned around and said, “Yes”!

But today’s youthful India doesn’t care for pedigree. They want some delivery. If not schemes, then at least some dialogues, catch phrases and grand speeches, it’s working for BJP.

Congress has better young leaders than BJP, but it suffocates them and drives them away. Rahul himself is reluctant to build a team. He had a chance to promote leaders like Shashi Tharoor, Sachin Pilot and Milind Deora directly into the Congress Working Committee but he did not.

This reminds us, in 1980 Rahul Gandhi’s uncle Sanjay Gandhi’s numerous friends such as Kamal Nath, Ashok Gehlot and Captain Amarinder Singh made it to the Seventh Lok Sabha. The Opposition called them “Sanjay ke chokre” (Sanjay Gandhi’s boys). It was also called the most youthful Lok Sabha. But Rahul Gandhi does not want any ‘chokras’. Is it because today’s chokras are more educated, more articulate and more dependable to deliver than Rahul Gandhi?

Worse, young leaders are treated shabbily, like they are the house help of the Gandhis. Example: When Assam leader Himanta Biswa Sarma visited Rahul to warn him that Assam needed an overhaul, Rahul, instead of taking him seriously and lending an attentive ear, was playing with his pet dog ‘Pidi’.  Later Biswa left Congress, joined BJP and delivered Assam to BJP.

Congress must realise that Rahul Gandhi is turning out to be a Political Peter Pan — never growing up to decisively lead. If the Congress has to survive, and survive it must, then the Gandhis must take a backseat or make an exit.

So, Congress wake up — Choose — and choose now — Country or Gandhi?

If the answer is “Madam’s family”, then you are doomed and so are we — to have a healthy democracy, we need a strong Opposition. No party must rule for too long because absolute power corrupts absolutely — it did the Congress.

If only Shastri had lived…

As we speak of the Congress party’s obsession and worship of the Gandhis, it’s apt to recall Historian Ramachandra Guha’s wishful thinking — what if Lal Bahadur Shastri lived. Because his death is what led to Indira Gandhi being made PM.

Guha writes: “Had Shastri lived, Indira Gandhi may or may not have migrated to London (Indira Gandhi had mentioned her desire to move to England as her sons were studying there in a letter to her friend Dorothy Norman).

But even had she stayed in India, it is highly unlikely that she would have become the Prime Minister. And it is certain that her son would never have occupied or aspired to that office.

Had Shastri been around for another five years, there would have been no Nehru-Gandhi dynasty. Sanjay Gandhi and Rajiv Gandhi would almost certainly still be alive, and in private life. The former would be a failed entrepreneur (Maruthi Car Project), the latter a recently retired airline pilot with a passion for photography.

Finally, had Shastri lived longer, Sonia Gandhi would still be a devoted and loving housewife, and son Rahul Gandhi perhaps a middle-level manager in a private sector company.”

12 COMMENTS ON THIS POST To “Pilot ejected, but Gandhis?”