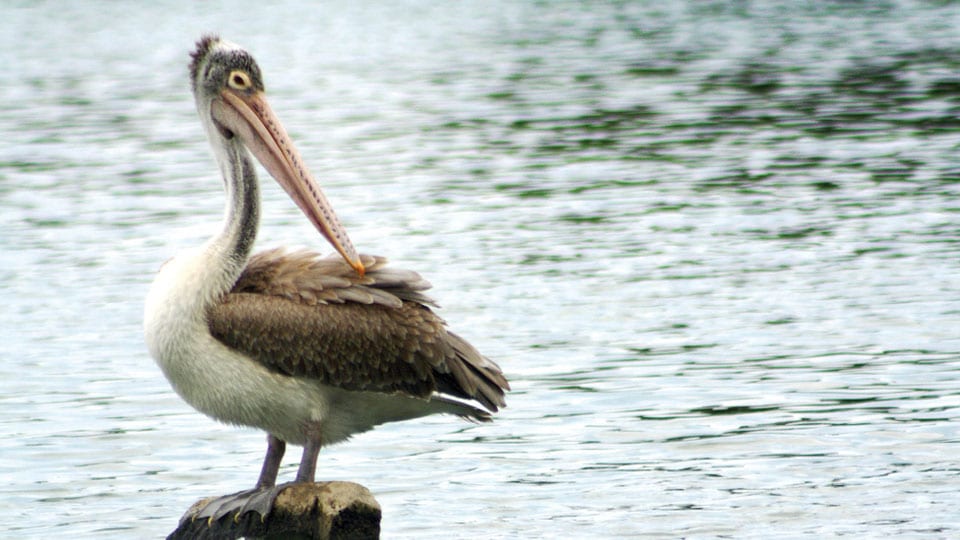 Pirates of the Lake

Next time you go out birding, watch for Pelicans, the pirates. They may not brandish knives, cutlasses, ropes or guzzle liquor. But they’re out there, lounging in the leafy shade or plying the winds, just waiting to pounce on passing treasures. Piracy or ‘kleptoparasitism’ — to use the technical term — is quite common in the animal world. Pelicans are expert in stealing food from other birds. Moreover, they consider piracy their birthright. This Weekend Star Supplement takes readers into the curious world of Pelicans — The Buccaneers.

Buccaneering is birthright of Pelicans

Pirates, the very word brings shudders. Sea-faring merchants of the 16th and 17th Century, sailing the Caribbean Seas to sell their merchandise and bring back gold, feared neither storms nor typhoons as much as they feared the attacks of Pirates. Pirates were sea-farers, fearless buccaneers, sword and pistol-wielding and intercepting merchant ships to loot them ruthlessly not hesitating to annihilate them and plunder their merchandise and valuables.

Piracy, the act of stealing by force or deceit, whatever is legitimately held by someone else. It is a criminal act as far as humans are concerned but in the natural world, where ‘Might is Still Right’, it is legitimate and only a fight for survival. The act of piracy can best be seen in various species of animals but birds are more famous and notorious for this.

All seven Pelican species are pirates

In Mysuru we have the Spot-Billed Pelican habituating our city’s Hebbal Lake, Lingambudhi Lake, Karanji Lake and Bogadi Lake. Pelicans are squat, heavy and ungainly birds with ridiculously short legs and webbed feet for a bird of that size. White coloured in adult plumage and greyish-brown in juvenile stage.

Gular Pouch is a wonder

The hallmark of a Pelican is the Gular Pouch – the loose baggy, un-feathered skin attached to its lower beak. This is the most interesting feature of the Pelican. The pouch can hold as much as 3-4 gallons of water. But the Gular Pouch is not a storage place for food comprising fish, crabs, molluscs, shrimps but more of a net to use as a scoop and hold the prey until the water is squeezed out and then swallowed.

Pelicans, the not-so-good looking squat birds, huge body, upsized beak and pouch, ridiculously small and stout legs, webbed feet and appearing the least aerodynamic-shaped creature, are in reality the most versatile of fliers.

It can take-off at the snap of a finger, flapping its huge wings spanning 2-3.5 meters depending on the age and species. The ungainly birds are marvellous fliers and are excellent in flight manoeuvres. They can land gracefully on a water body like an aircraft on a runway. After a take-off, a Pelican can gain high altitude within seconds and fly in the skies. Such is the power of flight and flight manoeuvrability endowed by nature to the Pelican.

Pelicans normally forage in pairs or singles, in shallow waters, using their huge beak and pouch like a fishing net, to scoop and collect fish and other aquatic life. Pelicans also exhibit an ability to plan a strategy along with their fellow Pelicans to hunt fish.

In the drier months when the water levels are shallow in lakes, the Pelicans form hunting groups to fetch fish. They form a circle of birds and start closing in on schools of fish, driving them to shallower shorelines and converging to a gorge.

Pelicans also reveal an uncouth behaviour of stealing and snatching the hard-earned legitimate food of other birds, snatching young hatchlings of other birds in the reed beds and mercilessly battering them to swallow as food, stealing eggs of other waterfowls and the likes. A sick and disabled bird in the water is the official Pelican food. They are observed to occasionally catch and swallow whole live ducks and teals. Such is their opportunistic feeding behaviour.

Pelicans consider piracy, their birth right. A plan is worked out by single birds to get a meal. Pelicans being master-schemers in such acts perch very close the Cormorants (a duck-sized black fish hunting bird) on a lake side perch, waiting for the Cormorants to begin the hunt.

The Cormorants get into the lakes and locate schools of fish and select a big fish for their meal. Once the prey is selected, the Cormorant dives underwater and catches the fish after a chase underwater. Cormorants, being masters in hunting fish underwater, are always successful.

This the Pelican knows and this is the moment it was waiting, perching close to a Cormorant. The Pelican now just waits for the Cormorant to come up with fish and then the Cormorant is chased and the fish is snatched mercilessly from the Cormorant’s beak. The Cormorant, being no match for the brutal strength and skill of the pirate bird, is helpless and has no choice but to give up its hard-earned meal.

Mysuru is an ideal place for Spot-Billed Pelicans to nest and breed. Ranganathittu Bird Sanctuary is the main nesting site and Kukkarahalli Lake offers a congenial nesting island with good trees. These birds are very sociable and tolerate other nesting birds like Cormorants, Spoonbills, Painted Storks and Egrets.

This habit of nesting is known as Colonial Nesting in ornithology.  While nesting and raising chicks, the Pelicans need a good foraging area to keep chicks well fed. The closely located lakes offer this requirement. Parents wean their fledglings in these lakes, teaching them an independent life of hunting and stealing.

Many birds only dabble in piracy, but some like Pelicans are notorious for it.  For scientists, kleptoparasitism or kleptoparasitic behaviour is a curious, genre-bending kind of behaviour. It’s not foraging, it’s not predation, and it’s not even parasitism in the bloodsucking, leechlike way we typically think of it. When kleptoparasitism robs a “host” of its energy, they do it before the poor animal has even ingested it.

If kleptoparasitism or piracy seems like the ultimate free lunch, it makes scientists wonder why only certain birds have picked up the habit. Ducks, Gulls, Hawks, Pelicans, and Frigate Birds seem especially prone to stealing food, but the behaviour seems to be absent from some 180 other families, according to a report in ‘Animal Behaviour’.

The ‘Animal Behaviour’ report found that brain size was a much better predictor of piracy than body size. Piracy, it seems, requires more brains than brawn.

Though the Spot-Billed Pelicans are infamous for their acts of ruthless piracy and chick stealing, the sad part is that these birds are enlisted in the Red List of IUCN (International Union for Conservation of Nature) as near-threatened species with a decreasing population. Habitat losses, pollution, degradation of nesting sites and excessive fishing have caused the population to decline.

Unless a serious clean-up act is initiated to restore our lakes and made bird-friendly, it won’t be long before our loveable pirates of the lakes vanish forever. Once a species goes, there is no way to revive them.

The subpopulation in Karnataka, formerly concentrated at the adjacent villages of Kokkare Bellur and Bannali in Mandya district, has now spread to form breeding colonies at Karanji Lake, Kukkarahalli and Lingambudhi Lake in Mysuru. It is difficult to estimate the size of this subpopulation but probable numbers are 350 to 450 birds.