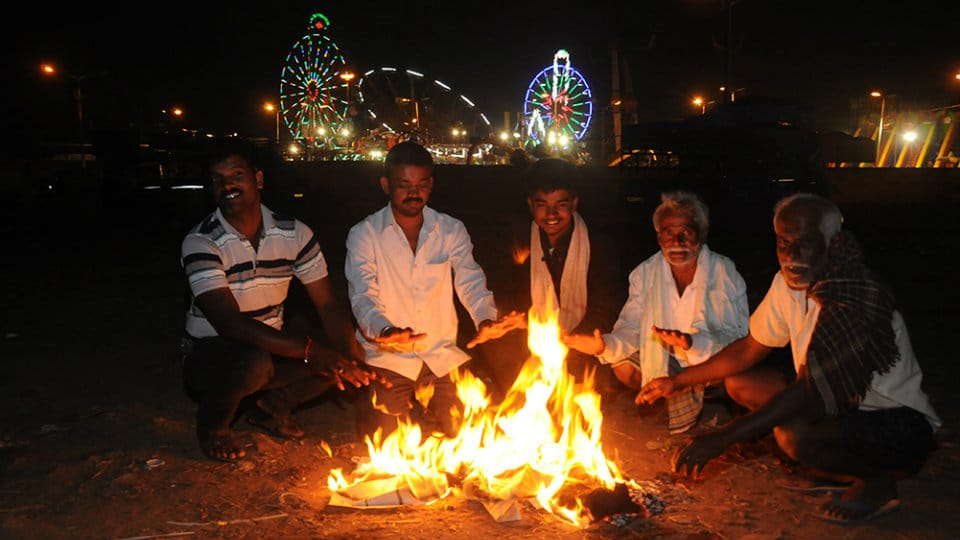 A sad tale is best for winter, says William Shakespeare in ‘The Winter’s Tale.’ This Weekend Star Supplement, however, is about winter and its happy times. It is about winter and its attached strings of festivities where people love to snooze under the blanket in chilly morns or relish hot chilli bajjis with coffee or tea in cold evenings. At the same time, it is also an occasion for warmth by celebrating Christmas and New Year with cakes, barbecues and bonfire.

If Spring and Autumn come… Can Winter be far behind ?

As cold breeze is sweeping past Mysuru, a new season is at the helm. It is winter, the coldest aseason of the year where people would snuggle in warm clothes to keep their bodies at bay from chill. Winter and festivity come in a combo package. While the spine-chilling cold gives us reasons to sleep and have steamy showers, the festivity provides us warmth and gives us reasons to stay awake and make merry. 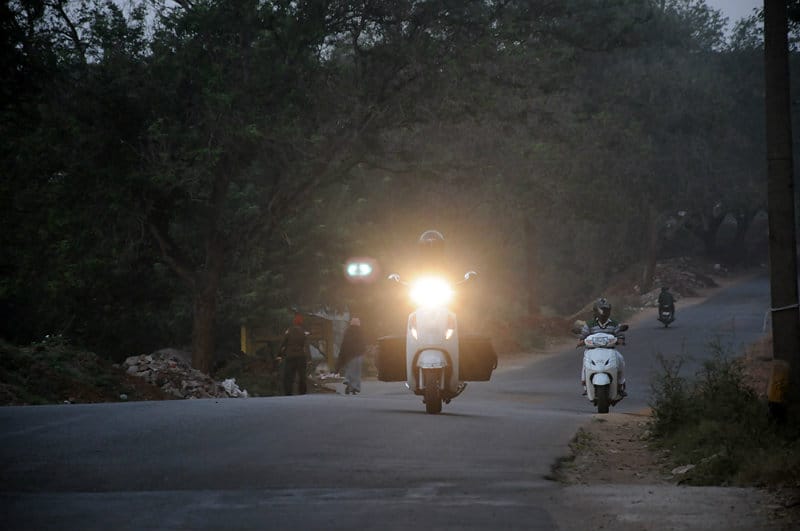 Getting up from the bed itself a constant battle every winter mornings – the struggle is real when one tries to curl up his toes as well as his head under the thick blanket and in his attempt to cover one of them, the other end tends to slip off from the blanket. There are several elements that connect winter and our practices and lifestyle. As the season turns chilly and cold, Mysuru shifts gear to this cold festive season that provides warmth everywhere.

If you happen to wake up early, you can notice people walking into temples while they completely cover themselves with monkey-caps, shawls and sweaters as it is the season of Dhanurmasa. 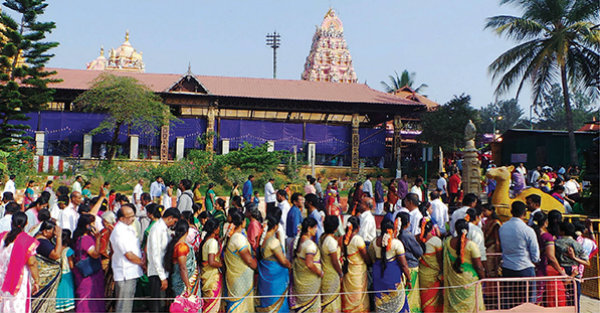 This season is considered inauspicious for good things and people worship Lord Vishnu in the early hours of the day as it is considered auspicious. It is called the Dhanurmasa as during this period of the year, the sun transits through Sagittarius (Dhanur Rasi).

This ritual of worship before dawn can be seen in various temples of Mysuru. People recite Vishnu Sahasranama during this period. Having a darshan of Adiranga (Srirangapatna), Madhyaranga (T. Narasipur) and Anthyaranga (Srirangam in Tamil Nadu) on the same day (dawn to dusk) in Dhanurmasa is considered auspicious.  People, fully draped in warm clothes, but for their half-asleep eyes, visit holy shrines in the mornings. While they return from the puja, temples provide them Pongal as a prasadam that is flavoured with pepper, giving a relief to throats and provide the much-needed warmth to the freezing body.

Who doesn’t love wearing warm clothes during winter? Pullovers, mufflers, hand gloves, shawls, sweaters, jackets, caps, etc. are up for sale all over the city. The Devaraja Urs Road is dotted with shops with mannequins fully covered with sweaters and jackets to draw potential customers. People generally love to keep themselves warm and winter clothes have definitely emerged as a fashion statement. The streets around Silver Jubilee Clock Tower near the Town Hall host sellers hailing from Tibet selling warm clothes to combat winter chill. One of the sellers, Phunpsok, says that their business touches its peak during this phase as they mostly sell winter clothes made out of wool and this is the season that gives them a good profit in their business.

He also added that they bring in the large stock of warm clothes in April. The clothes are brought from Ludhiana where they are manufactured and designed. The speciality of these sellers is that they sell winter wear at affordable prices for all age groups.

Spice up your Appetite

Mysuru is known for its love towards food and the heat turns up during cold season as the diet goes crashing where appetite and desires emerge victorious. No wonder it is a festive time for taste buds too.

Signboards at some gyms and fitness shops read “summer bodies are made in winter”. But taste buds don’t care as bodies with bulging waistlines can wait till January 1 when people make a resolution to get fit once again. 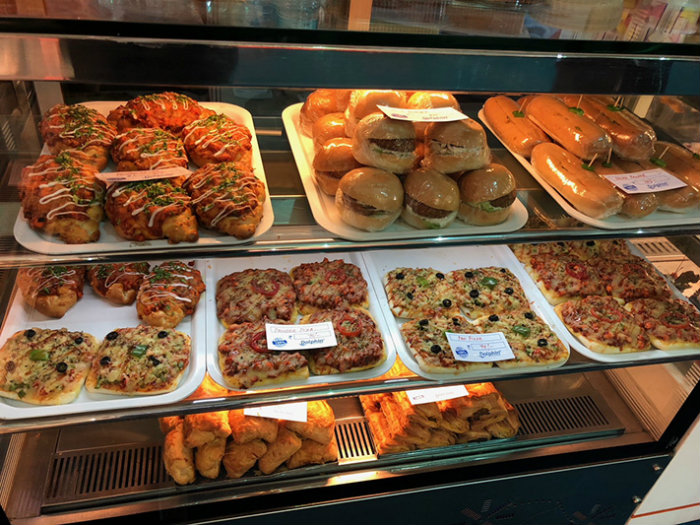 The fries, patties, bajjis, pakodas and bondas are some common snacks that are preferred during winter season. A plate of chilli bajji by your side and a hot cup of coffee or tea that warms your freezing hands is simply the best thing during this phase. And when the hot tea fires up your tongue and the spicy bajji hits a ‘burning’ top notch in your stomach – that is when you feel you have reached heaven.

Several streets in Mysuru sell bajji and bondas, even from make-shift places on roadsides and people are always seen swelling such places – just about time for the right snacks at the right phase of the season.

Sales of hot and spicy soups and steamed momos have suddenly picked up in Mysuru as they are slowly emerging to be popular snacks. Keep your stomach happy and make the most of this winter.

It is the festive phase of the year where Christmas and New Year are round the corner. It is also the time for holidays for those who were stuck in the melancholically humdrum mechanical form of life. No wonder it is the perfect time to escape from your routines and breathe the festive mood all the way through.

Mysuru has organised several cake festivals throughout December. The cake exhibits by Dolphin Bakery at Gruha Shobhe exhibition, cake festival by Aroma (the baking arm of Loyal World Group) and the cake festival that will be organised by the District Administration during Winter Festival are sure crowd-pullers. People will get to see great pieces of art and the effort involved in making these cakes. Dolphin has prepared several special cakes at Gruha Shobhe. But their major attraction is the cake model of Indian Parliament which weighs about 7,449 kgs. The bakers took about 28 days to make this cake. Here, they have used 5,100 eggs, 3,800 kgs of icing sugar, 1,800 lime, and gelatine of about 39 kgs and other ingredients that adds up to 1,010 kgs. 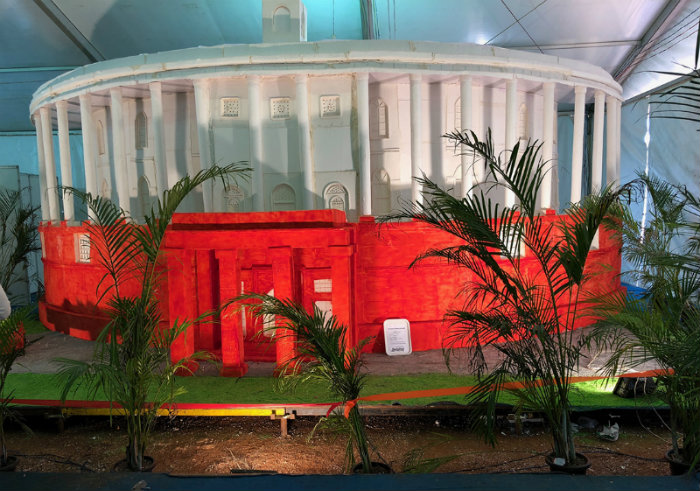 This huge cake was prepared by a team of 8 members and the initial work and setup was done at their factory at Hootagalli and they took about six days to finish the complete touch up work. As part of Christmas celebrations, they also sell special plum cakes, cookies, pastries, muffins, deserts, varieties of breads and rolls, home-made chocolates, soufflés, ghee cakes, donuts, puddings etc. The cake festival at various Loyal World branches or Aroma outlets will also add flavour to this festive mood. They have organised a 15-day Cake festival, where each day caters to a combination of special delicacies. The major attraction is the ‘Wedding Gown’ cake that has been displayed at the V.V. Mohalla branch of Loyal World. The cake is 162 kg in weight, 7 feet high and 3 feet wide.

As is the tradition at Aroma every December, they challenge themselves in making a masterpiece cake that the Mysureans can go and have a look. This year’s ‘Wedding Gown’ is inspired by the award-winning designer MakTumang’s work. It took the bakers 10 days to complete the masterpiece. 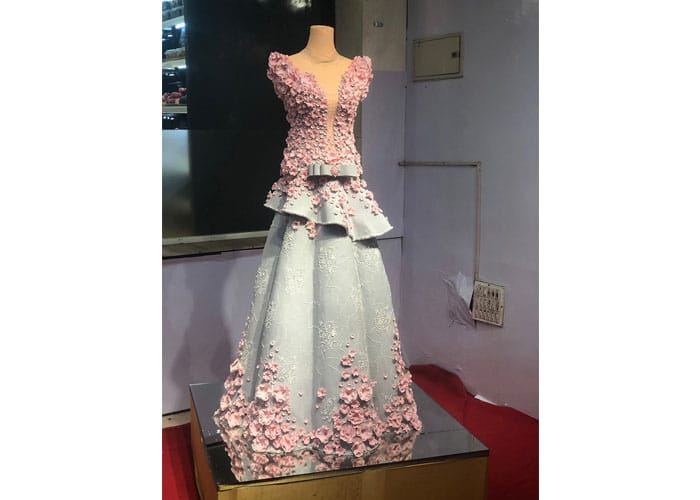 Aroma will be serving special delicacies on each day of the fest that begins at 10 am at all the venues — Loyal World Supermarket (V.V. Mohalla, Bannimantap, Infosys, T.K. Layout, Kuvempunagar), Loyal World Market (Mall of Mysore), Aroma Lounge (Bogadi Road, Hebbal Industrial Area) and at Gayathri Bhavan building, Dhanvanthri Road.

As the temperature glides down on the thermometer, people tend to sit by the side of fire to warm themselves up. As it is it is the time of friendly get-togethers, family outings and picnics, bonfire is a common sight. Fire camps and barbecue parties are something that the winter festivity is attached to. Numb hands, sore feet and a fire is all it takes to give the required warmth. Cooking outdoors, especially barbecued meat is something that has become a fashion amongst the modern generation – munching on smoking hot and spicy meat and a glass of wine to spice up the occasion. This is what festivity calls for – a time for yourself with your loved ones at an ambient environment where you tend to forget problems and responsibilities of your life as you venture into the world of escapism to find that lost smile on your lips.

It’s about time that we say goodbye to 2017 and celebrate the upcoming 2018 which will have an unexplored box of surprises and unpredictability. With malls and churches all decorated and illuminated, the city is shifting gears to welcome 2018 in a grand manner.

While New Year celebration have become an over-hyped thing of late, people leave no stone unturned to celebrate it in a grand fashion to culminate the passing year and step on to the next year. House parties, clubbing, neighbourhood get-togethers and a fest for the taste buds is on the cards – no wonder it is the time for festivity and a justified reason to party and enjoy hard. Though winter came in late this year, it has reached its peak at the right moment. With temperatures plummeting to almost 18 degrees, Mysureans have found a reason to pull out their wardrobes and explore their collection of winter clothes which seemed to warm the cupboard since a long time.

While cold waves touch the skin and freeze the blood, people cherish this wonderful season and feel life when the cold breeze hits their face.  With festivity to add some amount of warmth to this season, Mysuru will have the right balance of pleasant weather, and reason to celebrate this phase.

Winter has finally set in, at least six weeks later than normal. And now that it is here, it is expected to stay for a while. Scientists say when winters set in late, they usually linger for longer. They also say that February this year is likely to be colder than it usually is. In a normal season, Mysuru starts experiencing cold weather after November 15. This year, the winter has taken almost the end of December to set in.  Cloudy weather is expected to continue till Dec. 27 in Mysuru, Mandya and Chamarajanagar districts. However, no rainfall is predicted, authorities in the Indian Meteorological Department (IMD) stated.

Therapists and psychiatrists say they witness a five per cent increase in the number of people who suffer from depression this time of the year. Called the Seasonal Affective Disorder (SAD), it starts during the late fall and fades by early spring. The psychological reason behind this state is less sunlight, since sunlight is the best medicine for depression.

Studies state that 10 to 20 per cent of the recurrent depression cases follow seasonal pattern and December, January and February are the most depressive months since days are shorter, say psychiatrists.