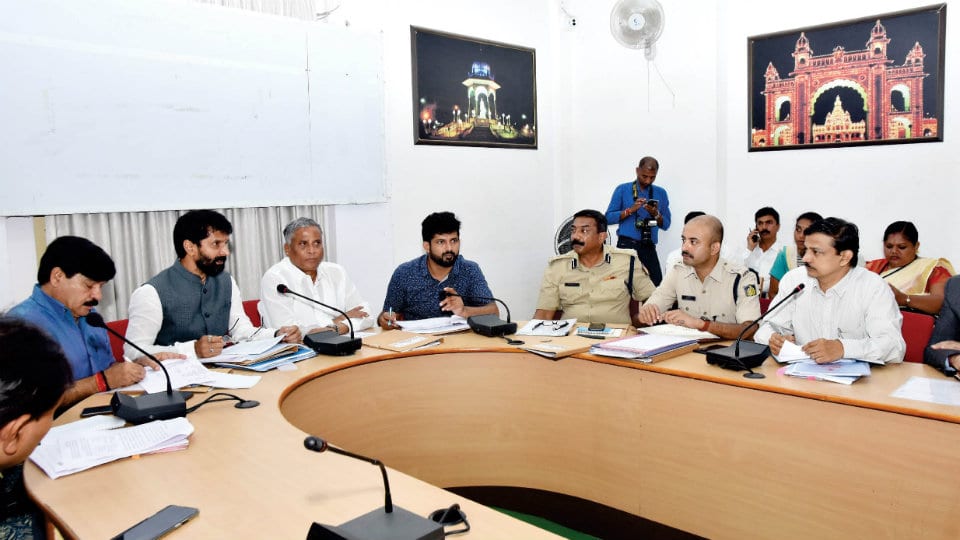 Plan in advance for Dasara-2020

Mysuru: Tourism Minister C.T. Ravi, who was in city since Sept. 10, pulled up the officials for their laxity in preparing for the Dasara-2019 festivities in advance.

Addressing the District-level officials during the Dasara Preparation Meeting at the Deputy Commissioner’s (DC) Office yesterday, the Minister asked the officials to come out with short-term as well as long-term plans to promote Dasara at National and International levels.

Tourism Director Ramesh, who was also present in the meeting, told Minister Ravi that the Department would be setting up a stall at Dasara Exhibition and would also place advertisements in various newspapers, magazines and  social media platforms.

publicity: The Tourism Minister suggested the officials to give publicity for Dasara in Airports, Railway Stations and Bus Stations besides placing ads in All India Radio (AIR).

“Tourists, who come to Mysuru to take part in Dasara festivities, must be informed about nearby tourist spots. It is a must to come out with a concrete plan to ensure tourists, who come to city on Day-1 of Dasara, stay for all the 10 days and visit tourist destinations in and around Mysuru,” he added.

Open Bus: Tourism officials informed the Minister that like last year they would be getting Open Buses from Bengaluru Metropolitan Transport Corporation (BMTC) to take the tourists around heritage spots.

When a Department official informed that last year Rs. 50 lakh was spent on 11-minute 3D mapping project, Minister Ravi asked the officials not to spend lavishly the tax-payers’ money and added that he could produce three-four short movies with the same amount on Dasara.

desi games & Chitra-santhe: The traditional and desi games will be held at Kiru Rangamandira in Kalamandira premises for which the date is yet to announced.

Chitrasanthe, which received a huge response last year, will be held at Krishnaraja Boulevard on Oct. 5 between 9 am and 5 pm.

Minister Ravi instructed the officials to complete all Dasara-related works within the commencement of the festival; provide mobile toilets and other basic facilities at various locations apart from Tourist Guides.