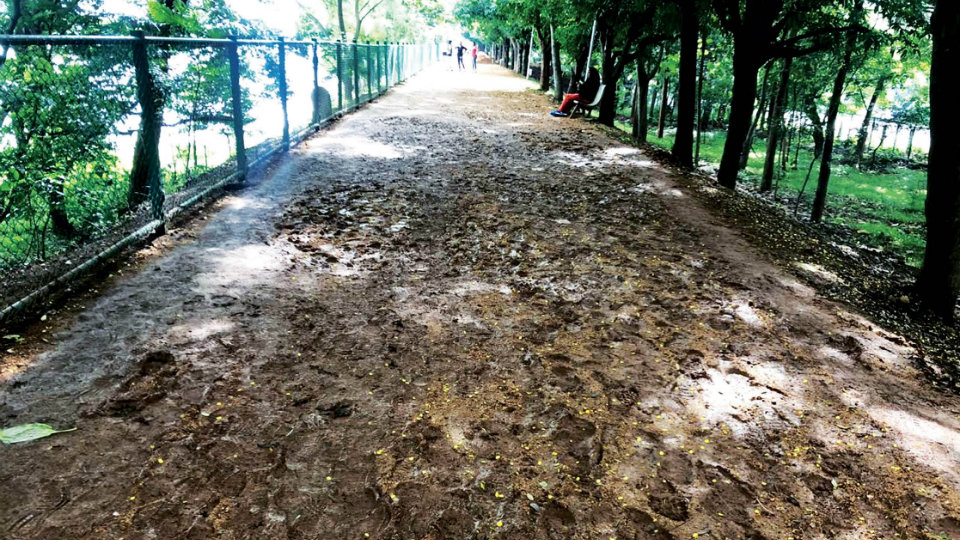 Welcome to a slushy Kukkarahalli Walkway

Mysuru:  Henceforth, you may need gumboots instead of sports shoes if you want to walk or run along Kukkarahalli Lake. Reason: The Lake’s walking path has become a slushy as red mud is being dumped all along, making it slippery and unsafe.

Several walkers called Star of Mysore office this morning to express their anguish at what they called ‘senseless’ act by the authorities concerned especially when Dasara is round the corner when the tourists are expected to come here. Surprisingly, they have offloaded truckloads of mud on an otherwise perfect walking path.

Fitness enthusiasts, who landed on the Lake for their regular walk, said that at places, rainwater has collected in small slush-pools, becoming a breeding ground for mosquitoes. Not only this, several truckloads of mud have been kept ready by the side of the walking path to be spread on it.

“This is a running or walking strip and not a ‘Garadi Mane’ (wrestler’s house) to have red soil. Fitness enthusiasts from the age of 8 to 85 use the path every day. If the authorities do not have the knowledge about this, they should consult professionals,” said a regular walker.

Another octogenarian complained that he would recommend orthopaedicians to put up their advertisement hoardings here. “I am sure that they will get many clients as people will sustain injuries and fractures walking on the slushy path. Also, I  recommend private ambulance owners to station their vehicles for some serious business,” he said.

‘We followed the Minister’s directive’

Star of Mysore contacted the University of Mysore that is the custodian of the Lake and learnt that the mud has been laid on the walking path as per the directions of Mysuru District Minister V. Somanna. University Vice-Chancellor Prof. G. Hemantha Kumar said that when Somanna came to inspect the Lake last week, several walkers complained that they have sustained injuries as stones were protruding on the walking path. They complained that they tripped and fell due to these stones.

“The Minister instructed us to dump mud to cover the protruding stones all along the path. Also he has asked us to open the toilets in the Lake premises and provide water which we have done. Unfortunately for us, after laying the mud, it has rained and it has turned slushy. This is the best way to cover the path and we have also consulted the experts,” he said.

Prof. Hemantha Kumar added that this morning, the Minister visited the Lake and appreciated the works. “In fact, he had good words for us and I was present during the visit. We also put lights on some stretches that were dark,” the VC said.

On the criticism faced by the University for laying mud, the VC said, “There are two groups among walkers. One group is against any changes on the tank bund and lighting as it disturbs the bird species. These are hard-core environmentalists. The other group is the common people who usually feed dogs and want some facilities to be improved at the Lake. We are split between the two and we are confused,” he said.

Prof. Hemantha Kumar regretted that the University faces criticism for any good work it does. “We are blamed for everything and we are criticised for everything. Here we just followed the instructions from the Minister and we are again targeted,” he said.