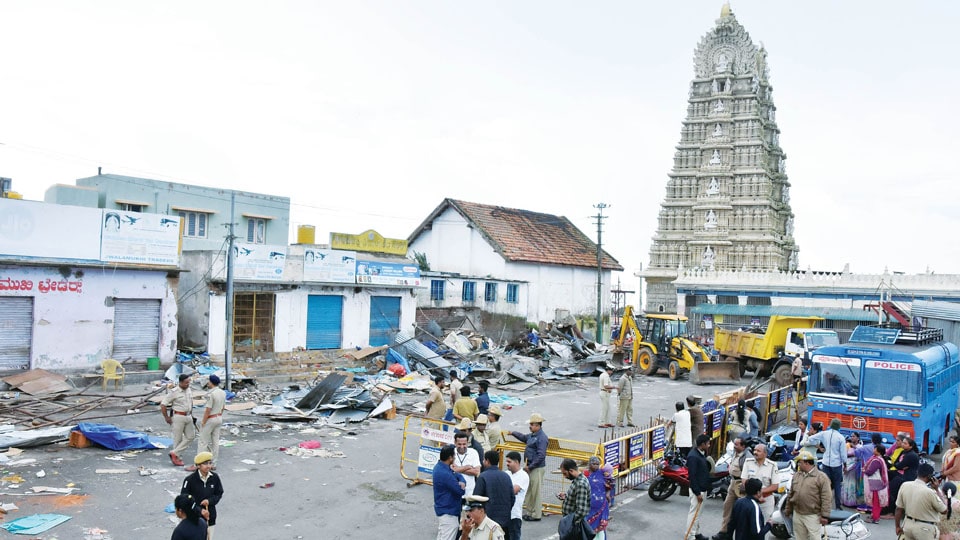 Mysuru: In an early morning pre-planned demolition drive atop the Chamundi Hill, the District Administration razed 97 shops including 45 licenced and 52 unauthorised ones to the ground.

Surprisingly, many of the shops were illegally allotted to the relatives of elected representatives and all these years, the powerful lobby prevented the eviction.

This drive to vacate the shops on either side of the road leading to the Chamundeswari Temple was undertaken on the direction of District in-charge Minister V. Somanna on Sept.8. Three JCBs began the demolition at 6.15 am in the presence of a 360-strong Police contingent even as the shopkeepers watched their shops being demolished silently.

Ramesh Babu speaking to Star of Mysore said, “In all, there are 377 shops atop the Hill out of which only 45 are licenced. The remaining shops are all unauthorised and many of them were owned by people with powerful political connections with some of them building eight to ten shops and a few four to five and renting them out.”

“A survey was done by the Gram Panchayat and it was found that there are 216 shops in the final survey. We demolished 97 shops this morning and the 45 genuine shop owners who have been identified have been given allotment letters from the Muzrai Department for them to move to the new Shopping Complex, containing 116 shops. The allotment letters will also be given to 52 other shop keepers whose shops were demolished,” he said.

Executive Officer Krishnakumar said, “The shopkeepers were all taken into confidence two to three days ago and they were asked to vacate the shops. They cooperated and removed all the items from the shop by last night itself. This morning they were clearing a few other things that they wanted.”

“In the survey that was done, it was found that more than genuine shopkeepers, there were at least eight to ten shops owned by one person and surprisingly some of them were in even government service who owned shops. But the final survey revealed that there are 216 shops,” he said.

Asked what the next step was, Ramesh Babu said that apart from the 116 shops in the new complex, there will be 100 shops of 8ftX8ft to be built in Kalnar sheets near the Multi-level Parking complex where those who were doing petty business will be shifted.

There are still nearly 100 shops, hotels and petty shops in the vicinity of the Mahishasura statue and near the Dasoha Bhavan and they have been served three months notice to vacate, he added.

The whole idea of this demolition drive atop the Chamundi Hill was to create an ambience resembling the Tirupati Temple also located atop a hill, said Ramesh Babu.

Rajashekar a shopkeeper and a few others who were watching the demolition, speaking to Star of Mysore, said that they had been doing this business since more than 30 years and it had not caused any problem. Even when Prime Minister Narendra Modi had visited the temple, the PM’s Security SPG (Special Protection Group) had not raised any objections of clearing the shops.

Even when Siddharamiah was the Chief Minister, he used to frequently visit the Hill and there was no mention of the shops on the roadside causing problems. “But now, our livelihood has been destroyed,” they charged.

They also said since they depended on Dasara sales as tourists to the Hill was very high during this period, the demolition and shifting of shops could have been done after Dasara.

A shopkeeper on condition of anonymity said that Shop No.31 in the new Shopping Complex had been allotted to a government servant which is against the rules. He wondered how such a blatant violation could take place and alleged that there were very influential local leaders who had managed to get allotted four to five shops in the new complex.

Chief Minister B.S.Yediyurappa will inaugurate the Multi-level Parking Complex and the shopping complex on Sept.19. The debris are being removed and the whole place cleaned.