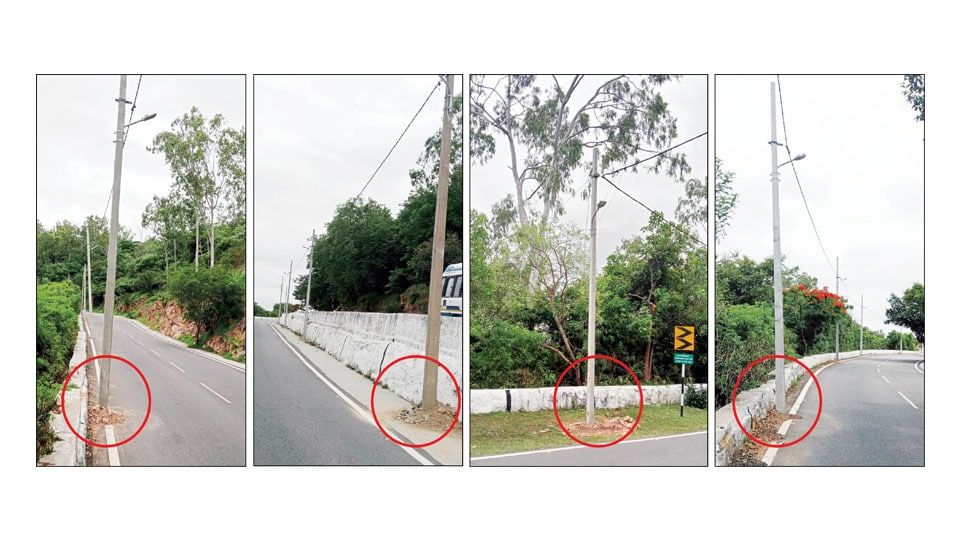 Mysore/Mysuru: Even as the city environment activists had questioned the wisdom of erecting electricity poles atop Chamundi Hill to welcome Prime Minister Modi and to increase the visibility of his cavalcade, officials from the Public Works Department (PWD) and Chamundeshwari Electricity Supply Corporation (CESC) that jointly carried out the works have assured that the street-lights will be a permanent feature henceforth.

Just three days before the PM’s Mysuru visit for International Day of Yoga, PWD and CESC officials and staff carried out the works of erecting over 150 streetlight poles from Thavarekatte Junction to Chamundeshwari Temple Complex at hilltop.

However, as the work was done crudely using drillers and poles were just fixed on the ground, many poles are already slanting, increasing the risk if it rained heavily. Officials confirmed to Star of Mysore this morning that the poles will be a permanent feature on the Hill and works will be re-done, wherever necessary, after putting a concrete base under each pole.

Environment activists had slammed the move to erect power poles in a Reserve Forest area as unscientific and illogical and would harm the fragile ecosystem of the Hill which is already a victim of unbridled development.

Also, the machine work would disturb the fauna and continuous bright lights during the night will force the bird and butterfly population to fly away.

Permanent feature: The officials and the elected representatives had justified the move then saying that as the areas of the Hill are pitch dark, they need to be lit up for the PM’s cavalcade to pass through. Then, the officials were not sure if the poles will be removed after the PM’s visit. But now, it looks certain that all the 150 poles will be retained and bright lights will light up the stretch.

Chikkanna, Assistant Executive Engineer of PWD told SOM that the decision to erect poles came just three days before the PM’s visit. “As we were in a tearing hurry to make the road visible, we were forced to get drillers to dig deep to facilitate pole erection on short notice. Now we have decided to make the poles a permanent feature and all the poles will be re-laid scientifically with a concrete base below so that they stand firm,” he said.

During drilling, the team faced many hurdles including rocks underneath. “In such places, we shifted the poles from the left side to the right or from the right to the left. Now since we have time, we will do proper work and ensure that no harm is done to the protective wall of the Hill. Poles will be appropriately laid so that they do not cause landslips,” Chikkannna added.

Sridhar, CESC Assistant Executive Engineer (AEE), Chamundipuram Division, said that they just supervised the works that were led by the PWD. “The PWD and the Forest Department have jurisdiction over the Chamundi Hill and we just assisted them as the works had to be done in a hurry. After that, connections too were provided. If the poles will be a permanent feature, we will not have any objections but will cooperate,” he added.

Ganesh Bovi, CESC Superintending Engineer, echoed a similar view and said that none of the poles will be left loose and a proper foundation will be laid to fix them. Temporarily, the connection will also be cut for the works and will be reconnected after the works are complete. The PWD and CESC will ensure that no accidents will occur,  he added.