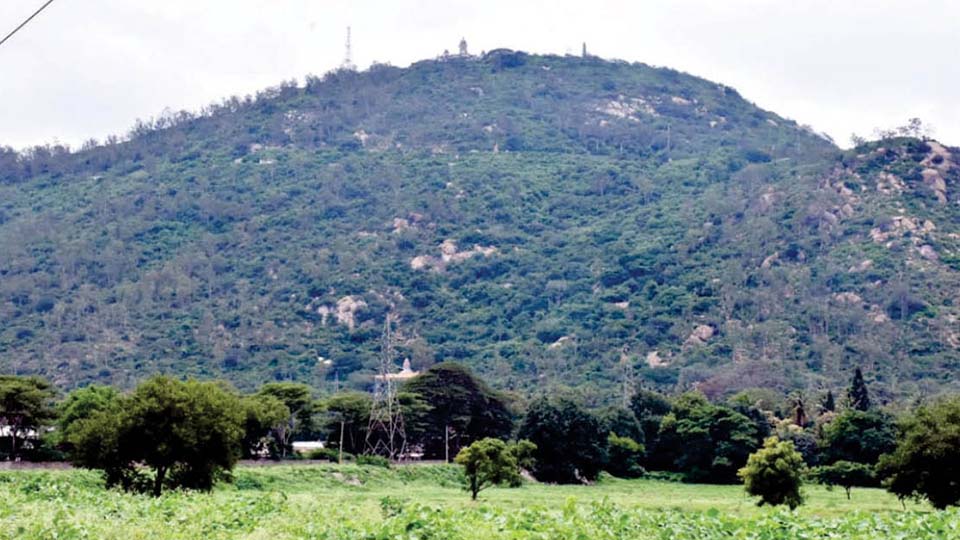 Plea to Save Chamundi Hill

Eversince Chief Minister Basavaraj Bommai announced a Ropeway to Chamundi Hill in his Budget and Mysuru-Kodagu MP Pratap Simha gave a statement about installing Railings to the 1008 steps (that take tourists, trekkers and devout pilgrims to the hilltop) which would be provided with funds from the Central Government under its PRASHAD scheme, the local NGOs and the environmentalists have been opposing these proposals vehemently. Among them, Maj. Gen. S.G. Vombatkere  (retd.) of MGP also is one. He has his reasons for opposing the project, in the wake of the Jharkhand  Ropeway accident on Sunday last, as detailed below. — Ed

In view of the special circumstances of Chamundi Hill with Chamunde-shwari temple at its peak, Government of Karnataka should en-courage visitors to the hilltop for religious occasions and devotional reasons, but keep commercial tourism outside this area, as a matter of policy. Such a policy is the only practical method of protecting and preserving Chamundi Hill’s religious-forest-environment-heritage ambience, which, once lost, will be lost forever. It will not affect commercial tourism elsewhere in Mysuru city.

It is apt to quote five sentences extracted from a Supreme Court judgement concerning the Forest Conservation Act, 1980 (29.3.2022; Hon’ble Justices Khanwilkar, Oka and Ravikumar). These unequivocally underline and emphasise the importance and primacy of environment:

According to the current EIA Notification, projects estimated to cost less than Rs.100 crore do not require EIA clearance from Government. Thus, EIA is not mandatory for most projects concerning Chamundi Hill.

However, considering the special status and character of Chamundi Hill as a combination of religious-forest-environment heritage within the Heritage City of Mysuru, it behoves Government of Karnataka to get an independent, transparent EIA carried out for any and every project proposed in any part of the Chamundi Hill.

A Ropeway project has been proposed twice earlier and dropped both times due to argued objections by people of Mysuru, regarding the irreversible negative effect on the environment and heritage of Chamundi Hill. Along with these objections, it was argued that the project would not be economically viable, since economic viability of the Ropeway would be based upon a study concerning: Expected season-wise demand on Ropeway; Number of persons per trip; Round-trip time; Trip (ticket) cost, including affordability, passenger insurance, GST, etc.; Electric power requirement and cost; Capital cost (investment) and amortization; etc.

It is regrettable that Government is yet again proposing a Ropeway, even though   environmental and heritage concerns regarding Chamundi Hill are heightened, the on-going economic situation for people is more difficult than earlier, and the economic viability of the Ropeway remains unaddressed.

Government might con-sider enacting a separate law which may be titled “The Karnataka (Mysuru Chamundi Hill Precincts) Protection, Preservation & Conservation Act”, with the purpose to protect, preserve and conserve the Chamundi Hill precincts.

A Draft Bill for the purpose has been prepared. It needs to be filled out and refined at the earliest, and tabled in Karnataka Legislative Assembly.

Note: Three tourists were  killed and nearly 50 were trapped in Jharkhand Ropeway accident that was reported on Monday after some cable cars collided with one another at Trikut Hills close to Baba Baidyanath Temple in Jharkhand’s Deoghar district on Sunday.