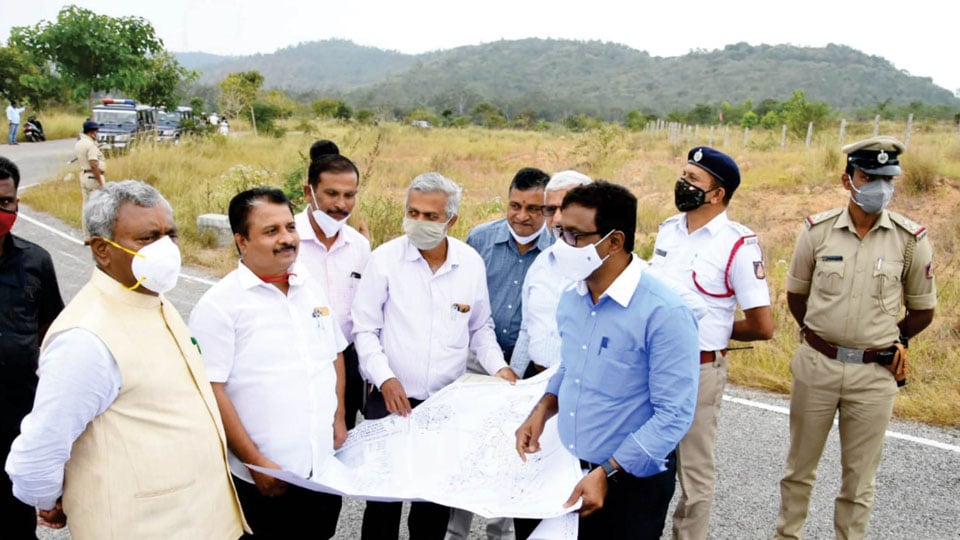 Mysore/Mysuru: Mysuru Urban Development Authority (MUDA) is mulling developing a Township at Lalithadripura in the foot of Chamundi Hill.

In this connection, Co-operation and District Minister S.T. Somashekar and MUDA Chairman H.V. Rajeev along with a team of officials inspected the spot yesterday [see pic].

Later, talking to media, the Minister said the MUDA is working out a plan to go for the construction of flats in Mysuru on the lines of Bengaluru and sell it at affordable price. On 22 acres available in Lalithadripura, it was possible to construct 2,500 flats of single and double-bedrooms.

Under Group Housing Scheme in Bengaluru, three-bedroom flats were initially sold at Rs.25 lakh and now the rates have shot up to Rs. 40 lakh – Rs.50 lakh per flat. In the wake of this, a similar scheme was being launched in Mysuru too, he added.

Somashekar said around 85,000 persons have applied to MUDA seeking allotment of sites. As it was not possible to distribute sites to all of them they would be distributed with apartments at affordable price.

Quality would not be compromised at any cost, he said and added that Urban Development Minister Byrathi Basavaraj will be requested to come here in next two weeks to give his approval for the MUDA proposal.

Rajeev said the MUDA has plans to distribute houses at affordable price to general and Middle Income Group (MIG) persons. Sufficient information regarding the advantages in going for multi-storey apartment complexes had been collected from officials of Bangalore Development Authority during his visit to Bengaluru recently.

Since, the Group Housing Scheme had been quite successful in Bengaluru, a similar scheme would be launched here too. The places for having multi-storey apartment complexes would also be decided, he added.

After I became MUDA Chairman, I visited several places reserved for Group Housing Scheme. One among them has been Lalithadripura. Then I decided that this place is ideal for this scheme due to beautiful weather and scenic beauty of Chamundi Hill. Already, basic facilities like UGD, drinking water and roads are available. A Detailed Project Report (DPR) will be prepared and sent to State Government for approval. My endeavor is to make flats affordable for people belonging to upper middle and middle income group.-MUDA Chairman, H.V. Rajeev

I have seen leaking roofs of Housing Board and Slum Board houses. That should not happen here. Mysureans will definitely like quality houses at affordable price. Infrastructure should be so good that the coming generation must remember. – District Minister  S.T. Somashekar