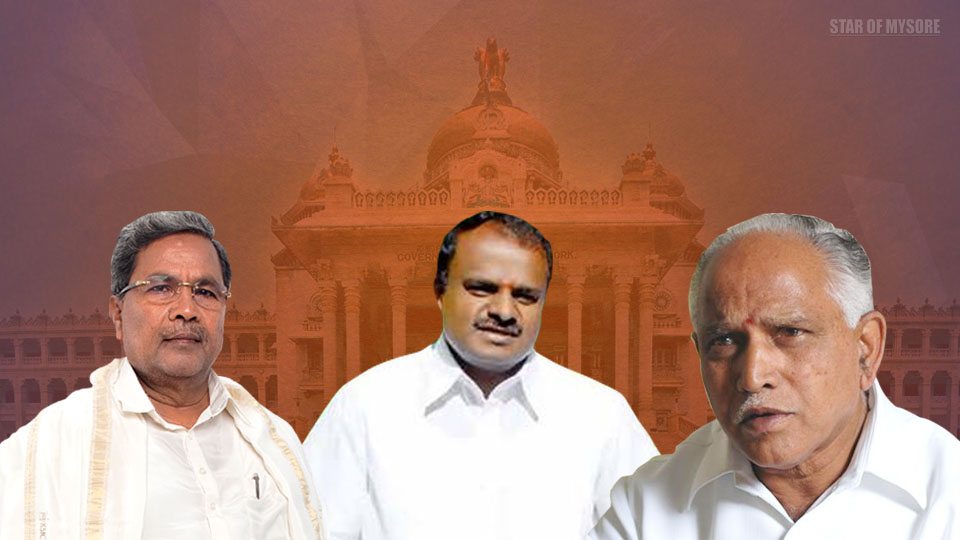 Mysuru: “Poaching” and “horse-trading” are two terms that have haunted Congress and JD(S) ever since the results came out for the Karnataka Assembly election. Both the parties have been busy in the past three days moving its Legislators from resort to resort in order to keep them out of BJP’s reach.

“MLA shopping”, “resort politics”, “Operation Kamala” — there aren’t enough names and expressions, apprehensions and persuasions to describe the current scenario following the split mandate. Amidst the confusion and the chaos in the State capital where parties are desperately trying to grab power, the loser is the voter who has made his/ her choice. He is a loser because he is not being taken into confidence in Govt. formation. He is apprehensive that the State might go for another election and the money paid by him as taxes will be used by leaders for politicking.

Sadly, if horse-trading is betrayal of people’s mandate, there seems to be no force or a Constitutional body (Courts, Election Commission, President or any other agency) capable of stopping political parties from betraying the voters.

The political drama that began last Tuesday (May 15) after BJP secured 104 seats as against a majority of 112 has showed no signs of ending with new developments each passing hour. From the time after the results were announced when Congress, a bitter rival of JD(S) during election campaigns, offered unconditional support to the latter to form the government till the time Governor Vajubhai Rudabhai Vala invited BJP Leader B.S. Yeddyurappa to form the Government as BJP is the single largest party, the drama started playing out in Bengaluru. The drama continued with twists and turns.

The political scene shifted to New Delhi when Supreme Court advocates owning allegiance to Congress knocked the doors of Chief Justice Dipak Misra for a late-night hearing on the Governor’s move to invite Yeddyurappa and giving him 15 days time to prove majority. Following this, the Chief Justice constituted a Bench. It heard the matter at 2.10 am on Thursday (May 17) in a rare hearing. The Court though refused to stay Yeddyurappa’s swearing-in asked certain tough questions on the Governor’s move.

Meanwhile, as the Congress and JD(S) lawyers approached the Supreme Court, the parties herded their newly-elected MLAs to resorts. Not satisfied by their stay in Bengaluru (Eagleton Resorts and Hotel Shangri-La), the parties shifted them to Hyderabad and booked accommodation in three resorts — Taj Krishna, Novotel Hotel and Grand Hyatt.

Following the Supreme Court directive on the floor test, the Legislators were brought back to Bengaluru early this morning. While the Congress MLAs were stationed at Hotel Hilton, JDS MLAs were housed at Le Meridian. The BJP, meanwhile, had its Legislative meeting at Shangri-La before all the MLAs were taken to the Assembly. One straight impact of the political drama is that the entire attention of the people is focussed on Karnataka. Political discussion is omnipresent at hotels, bars and restaurants, hair-cutting saloons and the famed Arali-Katte in villages where each person is donning the role of a political commentator giving expert opinions on permutations and combinations of the number game.

So much so that the routine work, especially in villages, has taken a backseat at people are busier in knowing who will form the Government than thinking about their livelihood. This is illustrated by puja rituals being conducted at various temples praying for divine intervention so that their favourite candidate will become the Chief Minister.

Now all eyes are on the Assembly where Yeddyurappa will seek the trust vote at 4 pm.