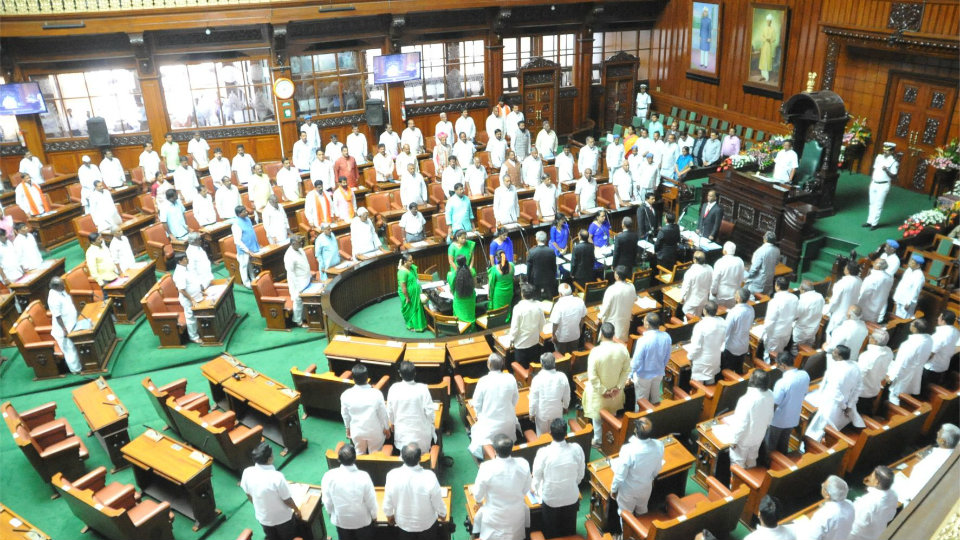 Bengaluru:  The stage is set for the keenly-awaited trial of strength in Karnataka Assembly today at 4 pm wherein the BJP government of B.S. Yeddyurappa will have to pass the floor test even as on the face value, the saffron party camp is still short of seven MLAs.

The floor test and one-day special session have been convened after the Supreme Court yesterday ordered for an immediate floor test for Chief Minister Yeddyurappa who was sworn in on Thursday and was given 15-day time to prove majority.

When Yeddyurappa moves a motion seeking the confidence of the House, the Legislative Assembly, officials are expected to take out a head count of the Legislators who are in favour of the motion first, and then of those opposing it. The members would be asked to stand up and the head count taken up row by row, starting from the first row. The names of the members would be written down in a register and counted later.

The session began at 11 am today with elected representatives being administered oath by pro-tem Speaker K.G. Bopaiah after Supreme Court this morning rejected the Congress-JD(S) plea against the appointment of Bopaiah as the pro-tem Speaker. The apex court has also ordered a live streaming of the floor test in order to ensure fairness. The live proceedings will be telecast on local TV channels. The Assembly Secretariat will record the proceedings.

The session started with the singing of the national song, Vande Mataram, following which Bopaiah welcomed and congratulated the members elected to the 15th Assembly and started administering the oath to them. Bopaiah read out the procedures to be followed during the oath-taking of the members.

Before this, the Speaker appointed a five-member Speaker Panel under Rule 9 of the Constitution. The panel comprised three members from BJP (Suresh Kumar, Vishveshwar Hegde Kageri and Basanagouda Patil Yatnal), one each from Congress (Ramalinga Reddy) and JD(S) (H.K. Kumaraswamy).

Later, Yeddyurappa took the oath first, followed by Congress Legislature Party leader and his predecessor Siddharamaiah. Then the other members started taking oath in batches of five one after the other. JD(S) State President H.D. Kumaraswamy took oath as Channapatna MLA and will resign from Ramanagaram constituency. At 1.30 pm (when we went to the Press), the Assembly was adjourned till 3.30 pm.

As per the Apex Court’s directions, the Police have made massive security arrangements in and around the Vidhana Soudha, the seat of the State Legislature, for the smooth conduct of the floor test.

Public entry to the Vidhana Soudha has been restricted, and officials and staff of the Secretariat are being allowed to   enter the premises after thorough checks.

“Elaborate security arrangements have been made at the Secretariat and the nearby Legislators’ Home to facilitate smooth conduct of the Assembly proceedings for the floor test,” Director General of Police Neelamani Raju said. 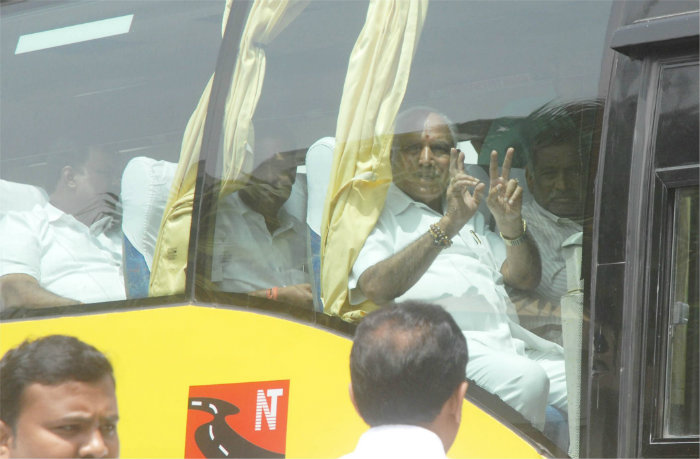 He might follow the footsteps of former Prime Minister Atal Bihari Vajpayee when he resigned in 1996 after 13 days in power.

Congress MLAs Anand Singh (Vijayanagar – Hospet) and Pratap Gowda Patil (Maski) were allegedly kept captive in Gold Finch Hotel in Bengaluru. A team of Police officials, led by Additional Commissioner Seemanth Kumar Singh, arrived at the hotel and sought clarification from the hotel authorities. Along with the two Congress MLAs, BJP’s Somasekhar Reddy (Bellary) too was missing from the morning proceedings.