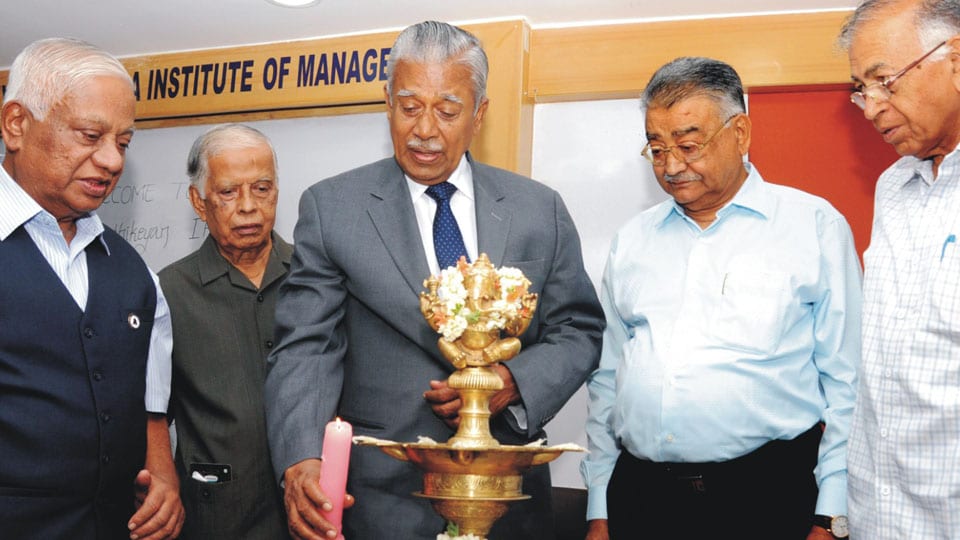 Mysuru: There is no better inspiration for the youth of today than our own Prime Minister Narendra Modi, to keep oneself healthy, both in body and mind, said former Director of CBI and Director General, National Human Rights Commission (NHRC) Dr. D.R. Kaarthikeyan.

He was delivering a lecture here this morning at Bharatiya Vidya Bhavan’s Priyamvada Birla Institute of Management and said that he asked a question to Modi when he was the Chief Minister of Gujarat and campaigning for the Parliamentary elections as a Prime Ministerial candidate, canvassing for the opposition BJP, how he could maintain his health with such a busy schedule.

“I asked Modi, how he could have so much energy to traverse across India, which is not just a country but a continent and also concentrate on his job as Chief Minister? Modi told me, ‘I get up at 5 am every day, do 90 minutes of yoga, meditation and pranayama. I don’t know what fatigue is and our duty as public servants is to be healthy’,” said Dr. Kaarthikeyan.

Recalling his long meeting with Modi, just before he became the Prime Minister and when he (Kaarthikeyan) was in the Gujarat State Council, he said that the Prime Minister’s favourite subject was Ambulance 108 as we serve the poor directly by ferrying them to the hospital when they are in trouble.

The conversation lasted for more than an hour with many direct questions, but he did not ask Modi questions like the Godhra riots, encounter killings, why Lokayutka was not appointed and malnutrition in Gujarat. “There were all these kinds of allegations. Modi listened to me as he knew that I had nothing personal. Somehow he wanted to convince me,” said Dr. Kaarthikeyan.

Dwelling at length on staying healthy, he said, “When the Prime Minister who is so busy finds time to do yoga, I don’t think the youngsters can give any excuse not to do yoga.”

He advised the students to have the right kind of food in right quantity, avoid harmful substances and engage in physical activities and particularly yoga. “I am born a Hindu and have faith in Hinduism. But I respect all religions. I was invited to Lahore in Pakistan once for a Sufi conference. I was the only vegetarian and Hindu there amidst a few who were fanatics,” he said. 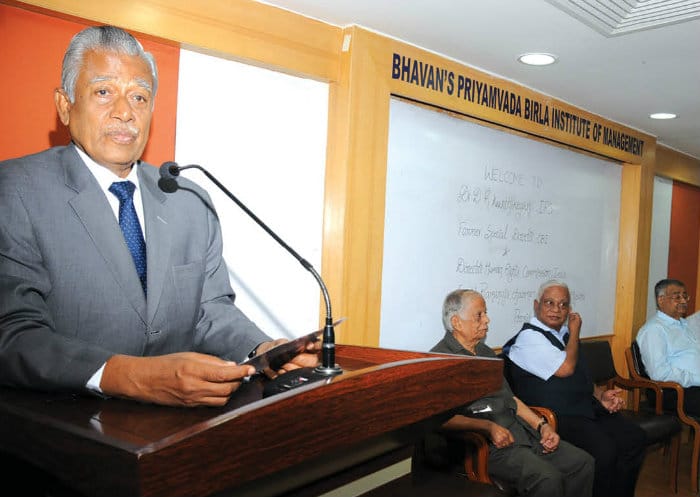 Vice-Chairman of BVB K.B. Ganapathy calling Dr. Kaarthikeyan more a saint than a Police Officer said that there were not many officers of the calibre of Dr. Kaarthikeyan today and that is the reason why IPS Officers’ (Karnataka) Association President ADGP Rajvir Pratap Sharma wrote a letter to Chief Secretary Ratna Prabha conveying his displeasure at the political interference in  Police duties.

“It is very sad that today many do not fear the Police. It is only the good people who fear the Police and respect the law. When there is no fear of the law the lumpen elements take over and the Police are in a dilemma whether to obey the Constitution of the country and the law of the land or the will of the political masters in power. If this situation continues then   we are headed for catastrophe,” he said.

The Police have a perfect role model in the Dr. Kaarthikeyan and if the society is to survive without any disturbance then such kind of officers are necessary and then India truly can look forward to Achhe Din, said Ganapathy. 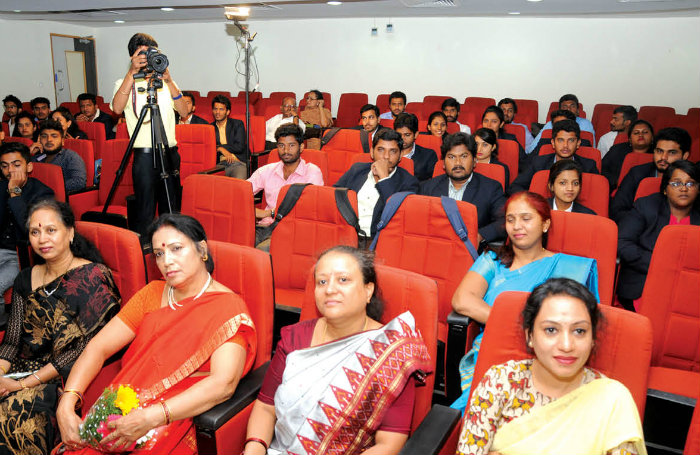 shows a section of the audience.

Dr. D.R. Kaarthikeyan beginning his lecture by saying that Mysuru was his favourite city said that though Melbourne in Australia where his daughter lives has been consistently voted for seven years as the best city to live, he still felt that his heart was in Mysuru as he had started his training in the Academy here in 1964.

He called everyone to begin a campaign to see that Prime Minister Narendra Modi selects Mysuru to hold the International Yoga Day this year. “Mysuru has always been known for yoga. The Maharajas of yore always supported it and one of the renowned yoga Gurus Krishnamachari who was teaching the Maharajas in the Palace was also Guru to the best known yoga exponents in the world Pattabhi Jois and B.K.S. Iyengar, both from Mysuru. Hence, Mysuru is the ideal place to hold the International Yoga Day this time,” he said.