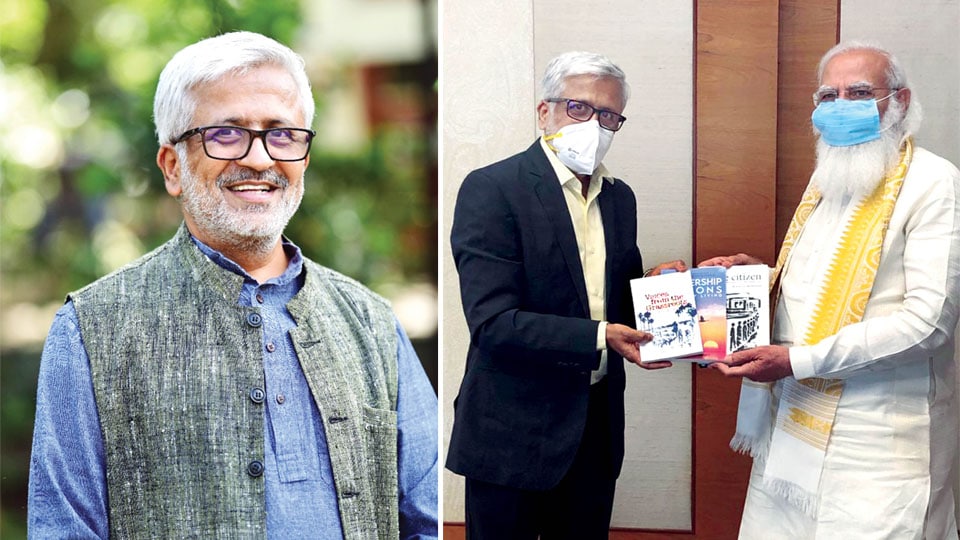 PM’s vision is to transform Karmachari to Karmayogi

The PM said Rashtra Bhakti is the primary requirement and bureaucracy must work towards citizen-centric governance. And we are building capacity for them.

NPCSCB has been designed to lay the foundations for capacity building for civil servants. Following his new responsibility, Dr. Balasubramaniam has moved to New Delhi now.

In a free-wheeling chat with Star of Mysore, Dr. Balasubramaniam outlines the PM’s vision, the tasks cut out for him and his team. Excerpts…

Star of Mysore (SOM): Can you share with us your experience of meeting the Prime Minister.

Dr. Balasubramaniam: I am not a person who gets easily carried away by a personality, but the PM was extremely insightful, inspirational and practical about Mission Karmayogi that is his brainchild. Hearing him, I realised that he has been thinking about citizen-centric governance since years and how to make India future-ready and for it you need a future-fit India.

SOM: What are the key takeaways from the discussion with the PM?

Dr. Balasubramaniam: He spoke to us for nearly one-and-a-half hours explaining the entire purpose and idea behind capacity-building, why he chose us and what he is expecting from us. He was very practical and at the same time had ample clarity of what he wanted.  It is to build capacity for civil servants so that they remain entrenched in Indian culture and sensibilities and remain connected with their roots while they learn from the best institutions and practices across the world. The PM said Rashtra Bhakti is the primary requirement and bureaucracy must work towards citizen-centric governance. And we are building capacity for them.

SOM: Can you explain some of your roles and responsibilities?

Dr. Balasubramaniam: Basically the bureaucracy that we have now is inherited from the British and the British trained the bureaucracy to follow rules set by them. This has not changed even now. The Prime Minister wants us to support transition from ‘rules-based’ to ‘roles-based’ governance and aligning work allocation of civil servants by matching their competencies to the requirements of the post. In the first phase we are targeting 50 lakh civil servants which is a huge number. The entire scope of work involves all public servants.

There are over 4 crore public servants in India and we need to bring in transformation from a karmachari to karmayogi and each public servant must think that he is in that position for seva — to serve people.

SOM: Do you think the Capacity Building Commission would bring about transformational change in the civil service?

Dr. Balasubramaniam: Yes, definitely. Normally, all training is given to top bureaucrats — IAS, IPS, IFS and so on. We started work and planning for the ecosystem three months ago though we formally took charge last week. There are hundreds of training institutions to train bureaucrats and the focus has always been on training the top 29,000-odd Government servants.

Actually, the officers who are facing citizens in their day-to-day work are not trained on a citizen-centric approach. A major chunk of Indians’ contact with bureaucrats is primarily with a lower-rung officer or a local village official handling land issues and higher up in the hierarchy, a Tahsildar or they mostly interact with a beat Constable, Head Constable or a Sub-Inspector. We felt that what is needed is a bottom-up approach or rather I would call it bottom-across approach where all officers are covered. This is altogether a new approach and no one has thought about it so far.

SOM: So in other words your team will make a bureaucrat more creative, constructive, professional and technology-enabled.

Dr. Balasubramaniam: We will be directly reporting to the PM and a Special Purpose Vehicle has been set up and a digital platform called iGOT (Indian Government Online Training) has been created that brings the scale and state-of-the-art infrastructure to augment the capacities of officers.

At present, all the 739 Government training institutes in India function in siloes and they don’t share resources and without contact with each other. We intend to break the compartments.

SOM: Tell us something about your immediate task.

Dr. Balasubramaniam: Mission Karmayogi is a holistic approach to civil servant training and career development. It will include an annual capacity building plan for all departments with the aim of ensuring efficient service delivery, the setting of benchmarks to encourage and monitor civil servants’ development and a focus on technology-based learning.

We are immediately designing a course that every citizen-facing public servant must pass and we will be deploying it based on technology. We will do a massive pan-India survey to glean what the citizen expects from the Government. We will have to see what the public perception about the Government is. Or rather what do the Government servants per se feel about their work and why are they inspired for what they are doing. We will have to capture the common thread and design a course.

Dr. Balasubramaniam: Earlier, reforms were only recommendatory in nature. Capacity Building Commission is an independent executive commission focusing not on reforming people but it builds capacity of people to perform better in the long term.  It is reforms to perform and transform the system, thereby transforming the nation.

We will bring progressive incremental change in the capacity, not immediate change. Even PM Modi told us to gradually focus on change. The transformation is not immediate and it does not have a fixed term. It is a permanent process. Whoever inherits the office of the Capacity Building Commission will see betterment of abilities and thereby deliver the national aspirations. We will not just recommend capacity building but implement it too. And capacities keep changing as the country evolves.

SOM: How do you think your experience in working with the grassroots helps with your new job?

Dr. Balasubramaniam: My Public Administration education at Harvard University and development work with rural and tribal people for 37 years have helped me clearly understand what a citizen looks forward to from a Government. In our country, we cannot function without a Government. We in fact cannot live without the Government and we need to have systems to stay and also perform efficiently.

NGOs and the private sector cannot deliver on citizen aspirations, this I can very well tell you out of my own experience. We cannot supplant the Government; rather we can only supplement the Government. Only a Government can deliver at a macro level that will benefit billions of people.

My mandate would be to package my learning and experience to pedagogy for on-demand learning and hands-on domain knowledge. I believe in setting benchmarks to encourage capacity building with technology-based learning. This is preparing the system for the future.

SOM: Tell us about the books you presented to PM Modi.

Dr. Balasubramaniam: The first book was ‘I, The Citizen’ that was in fact released five to six years ago at the Prime Minister’s Office. PM Modi was not there and he had asked Union Minister Dr. Jitendra Singh to release the book. At that time I was told that the PM had read the book. Next I gave him ‘Voices from the Grassroots’ and ‘Leadership Lessons for Daily Living.’

The PM had sent a word that he needed a copy of the books and it was a privilege to me. Any day for any author if someone calls up and says I have read your book and it was great, your day is made. Here the Prime Minister himself evinced keen interest and asked me for copies. Giving them personally to him was a moment to cherish.