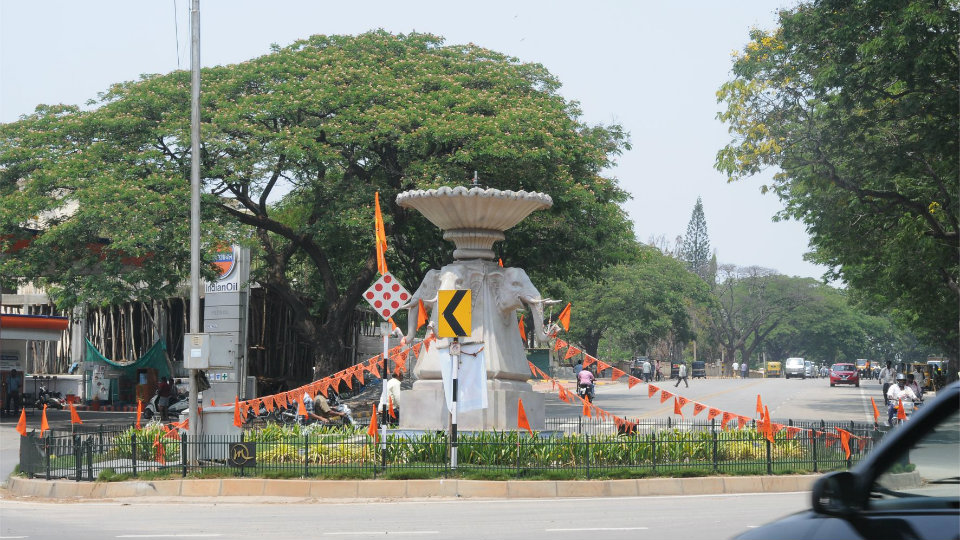 A few months back, in October 2016, District in-Charge Minister Dr. H.C. Mahadevappa inaugurated one of the iconic fountains at the Maulana Abul Kalam Azad Circle, popularly known as ‘Highway Circle’, with great fanfare. The fountain, embellished with a beautiful centrepiece of sculpture, with four elephant heads looking in four different directions with their trunks raised, has since become popular as the ‘Elephant Circle.’

It was built at a cost of Rs. 25 lakh as a gift to this city by the Brigade Group, the well-known developers and builders, who also own the nearby 5-star Hotel Grand Mercure.

In the recent past, a political party had disfigured the fountain by tying the party buntings and festoons all around it using the trunk of the elephants for the purpose. This morning  a similar kind of vandalism was seen at this fountain by an organisation, apparently in connection with its function. Our office had received a few telephone calls decrying this kind of vandalism of a beautiful iconic fountain asking us to draw the attention of the MCC Commissioner, the local Corporator and those  who are concerned with this  fountain by publishing about it in this newspaper. So it is.

Over to the MCC Commissioner and all those who are responsible for maintaining the aesthetics of the city. It is feared that while tying those buntings using the trunks of the elephants there is every chance of the sculpture being damaged as people might handle it roughly  causing disfigurement.