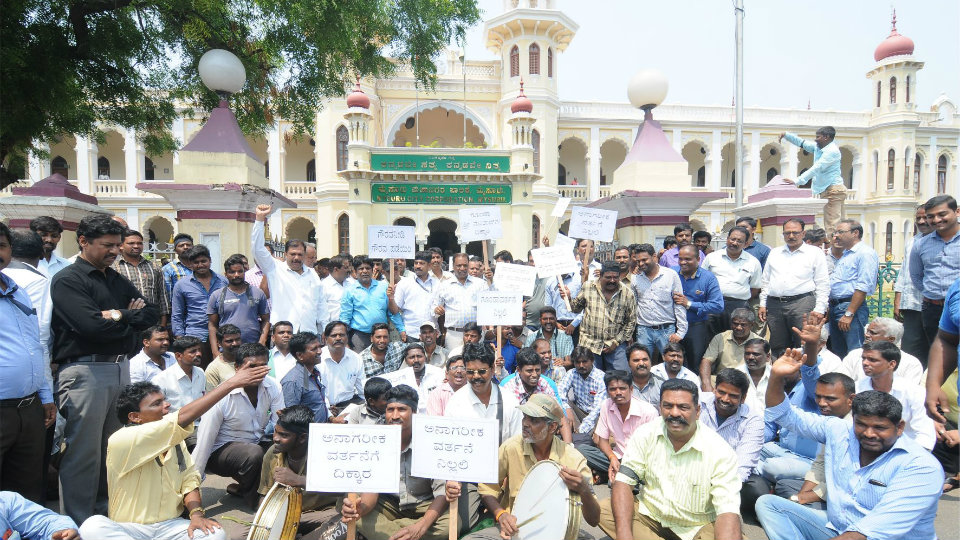 Mysuru –   The employees of Mysuru City Corporation (MCC) today staged a dharna in front of the MCC on Sayyaji Rao Road in protest against Corporator B.M. Nataraj who allegedly threatened and abused MCC Development Officer Ningashetty over the phone yesterday.

The MCC employees boycotted their work and staged a dhrana for more than an hour wearing black ribbon around their arm. Later, Mayor M.J. Ravikumar, former Mayors B.L. Bhyrappa and R. Lingappa, Corporator Shoukath Pasha addressed the protesting employees and promised that such incident would not repeat in the future.

They also promised to arrange for a meeting with Corporator B.M. Nataraj and MCC Development Officer Ningashetty and sought out the issue. The Mayor and others Corporators assured that they would not interfere with the FIR filed against B.M. Nataraj. 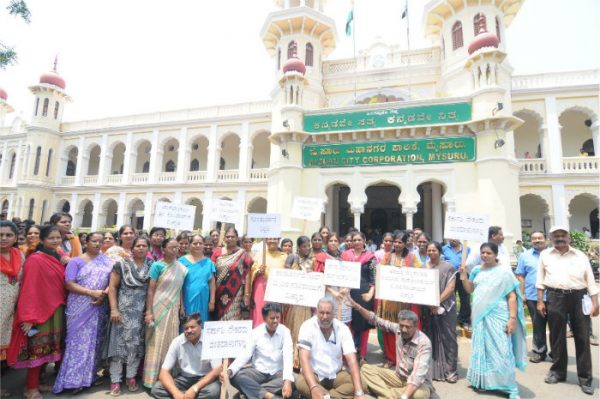 Speaking to Star of Mysore, Ningashetty accused Nataraj of abusing and threatening him over the phone with respect to the works related to Cauvery Road in Ward. 57.

“A proposal for Rs. 30 lakh for the development of the road has been submitted. Since MCC Commissioner G. Jagadeesha who is busy with the works related to by-election has not returned, the tender cannot be invited. The Corporator  wanted the works to begin without the tender process. Since the works are estimated at Rs. 30 lakh it cannot commence without tender process. I only informed Corporator Nataraj about the procedure for which he abused and threatened me over the phone”, Ningashetty said.

He also said that he would not withdraw his complaint filed against Nataraj.