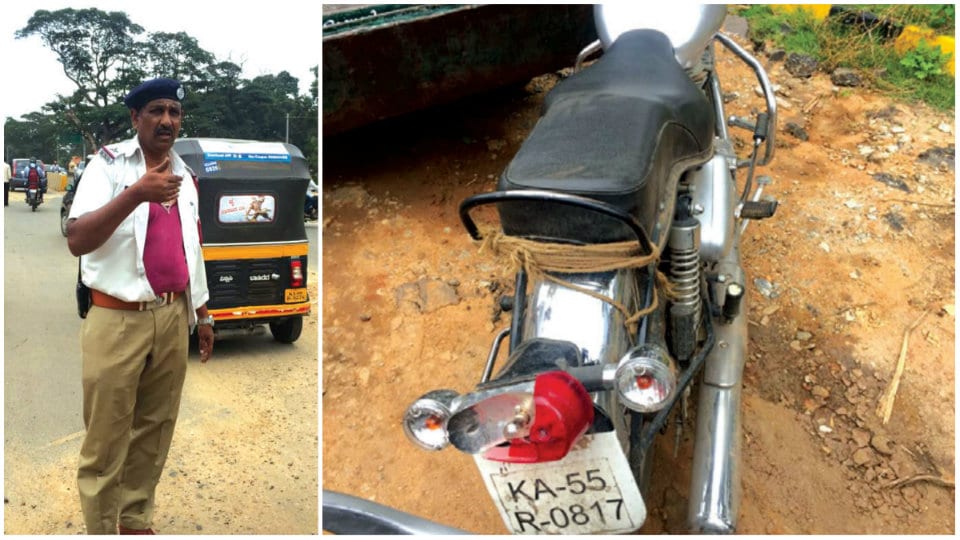 Mysuru: The Nazarbad Police has lodged a petty case on the person who allegedly assaulted a duty-bound Assistant Sub-Inspector (ASI) of Police yesterday at Maharana Pratap Singhji Circle near Race Course. The incident has surprised many as somebody could easily get away after assaulting a Cop.

It may be mentioned here that Star of Mysore had published a news item along with photograph yesterday on the incident where Siddarthanagar Traffic ASI Padmanabha was allegedly assaulted by 24-year-old Manish, son of Mansoor Karan, a resident of Ashoka Road in Lashkar Mohalla.

Padmanabha was checking two-wheeler riders without helmet at Maharana Pratap Singhji Circle near Karanji Gate and stopped Manish at around 12 noon who was riding his bullet bike (KA-55 R-0817) without a helmet and who was also triple riding. Seeing the Police, Manish took a U turn. While Manish’s bike skidded, his friends managed to escape.

Manish was immediately surrounded by ASI Padmanabha and team. Taking objection to this, Manish got into a verbal spat with Padmanabha. Taking the names of influential persons and politicians, Manish told the Cops to repair the road first and then check for helmet-less riding. When the Police booked him for helmet-less and triple riding, Manish allegedly pulled the ASI’s white uniform shirt and ripped it apart.

Manish later went to Nazarbad Police Station and complained that ASI Padmanabha had harassed him.

Padmanabha too reached the Police Station and told Inspector Shekar that Manish misbehaved with him. Hearing both sides, a petty case (disturbing public peace and creating nuisance) was booked against Manish and he was let off in the evening. The Police have seized Manish’s motorbike.

Though the incident happened in full public view, the Police have booked a petty case and have let off the person who tore the Police uniform.

Surprisingly, the ASI has said that the buttons in his uniform shirt gave away as there were a lot of people in the area when the incident happened and he had to squeeze between the crowd.

Speaking to Star of Mysore, Padmanabha denied that his shirt was ripped apart by Manish. “Yes, there were some arguments when his bullet bike was stopped and he took the names of influential people. Later, Manish’s sister and other family members came to Nazarbad Police Station and claimed that Manish was mentally disturbed. They even produced certificates to substantiate their claims,” he said.

Padmanabha said that he had pressed for a “public nuisance” case as the family members had pleaded him and Manish’s disturbed condition. He added that Manish had given them an apology letter.