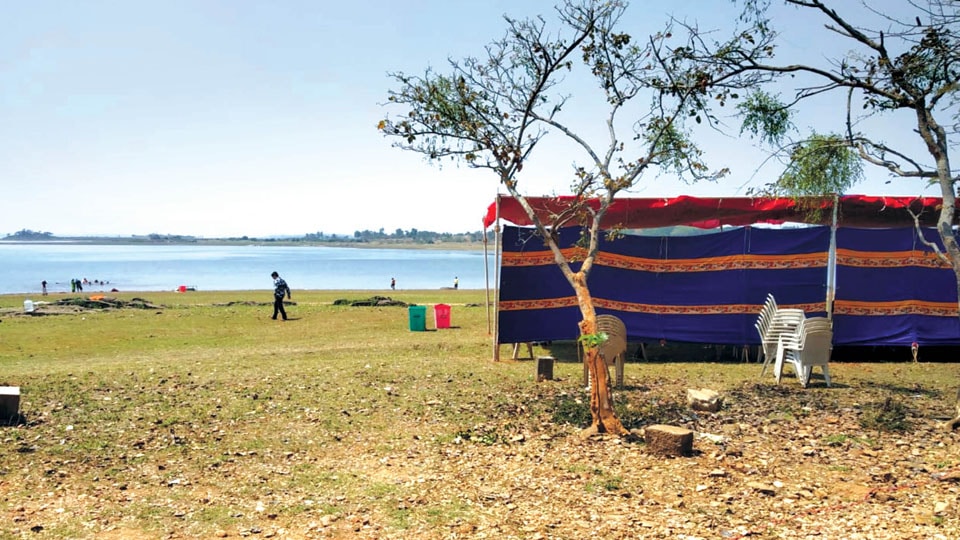 Srirangapatna: A day after an incident of a youth driving a Police jeep on the wall of the high-security Krishna Raja Sagar (KRS) Dam from the main gate (North Gate) came to light, another incident where Police personnel were found partying at KRS backwaters, again a restricted area, has surfaced.

Photos of Policemen partying at the backwaters after pitching a shamiyana are being circulated widely on social media, questioning the special privileges granted to them when public entry is banned in that  sensitive zone.

The Police team from the Karnataka Police Academy —more than 120 of them along with their family members — partied at the backwaters around 200 metres from the North Gate at Hosa Kannambadi village and indulged in fun games and also played in water.

Food was cooked at the venue and they also enjoyed their day singing and dancing. IGP Vipul Kumar too took part in the day-long picnic, villagers said.

Villagers have taken objection to the partying at the backwaters while the common man is not even allowed entry there as it is a restricted area. When some public questioned the Policemen on this, they justified their action and said that they had come to the backwaters to spend some time with the families as it was not possible to go to a resort. The villagers, however, demanded action against the Police and Irrigation Department officials for their alleged inaction in preventing such an event in the backwaters.

Reacting on the development, Mandya DC told reporters that she has asked the Srirangapatna Tahsildar to submit a report on the Police picnic. While KPA Deputy Director Dr. Suman D. Pennekar clarified that it was just a get-together and not an illegal activity, Assistant Director Gajendra Prasad said that it was just a picnic to unwind for KPA staff and families.

Meanwhile, the identity of the youth who drove the jeep on top of the KRS dam has been established. He is Surya of Belagola village and he drove the jeep and a Police Inspector attached to Karnataka Industrial Security Force, identified as Swamy, accompanied Surya.

Swamy had captured the video on his mobile phone. Officials from Cauvery Neeravari Nigam Limited (CNNL) said that the video was shot two weeks back and a detailed investigation will be conducted.

The KRS Reservoir constructed across the River Cauvery had been under a security blanket since the assassination of the former Prime Minister Rajiv Gandhi. The Liberation Tigers of Tamil Eelam (LTTE) of Sri Lanka had threatened to blow up the KRS. It has been also facing threats from Pakistan-based militant organisations and security has been stepped up. Thus, organising events or entering the reservoir premises without permission had been banned.