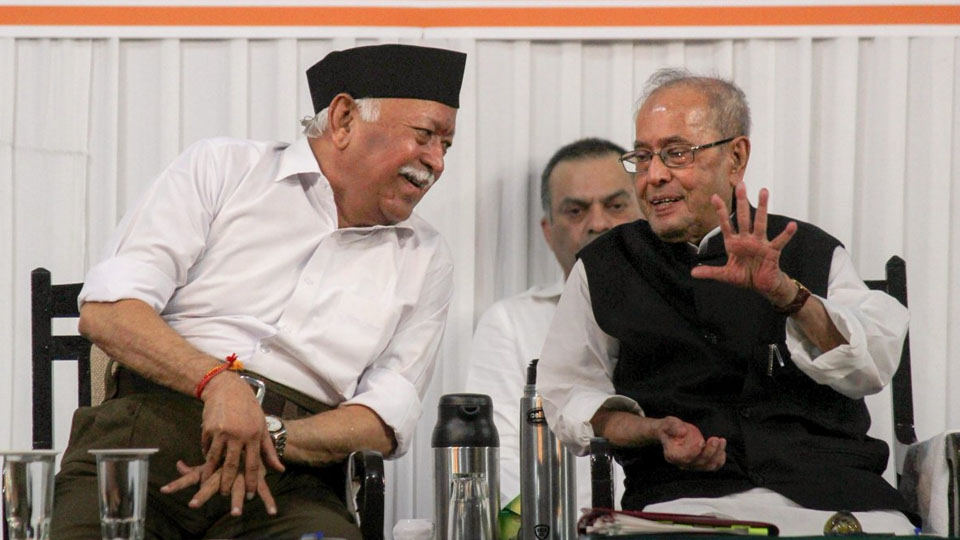 Political untouchability no solution to differences: Pranab at RSS hub

Nagpur: Giving his much awaited speech at the RSS headquarters, former President Pranab Mukherjee said on Thursday that political untouchability is not a solution to ideological differences. He added that informed and reasoned public engagement is of national importance. “A dialogue is necessary not only to balance the competing interests but also to reconcile them.”

Speaking at Reshimbaug Grounds at the headquarters of the RSS here on the occasion of Tritiya Varsha (graduation ceremony of RSS functionaries) yesterday, Mukherjee made it clear that the “soul of India resides in pluralism and tolerance”. He then went on to underline the secular and composite culture of India.

“I am here to share my concept of nation, nationalism and patriotism in the context of India. Our national identity has emerged after a long process of confluence and assimilation, the multiple cultures and faiths make us special and tolerant,” he said.

Sangh Chief Mohan Bhagwat underlined RSS’s commitment to “unifying” society and that the imprint of Indian culture can be seen on all Indians. His comments seemed intended to take away some of the sting on the former President’s remarks on the need to preserve and        celebrate diversity. At the end of the function, Mukherjee stood up with others as the RSS flag was lowered but did not join the “salute”.

Mukherjee’s decision had drawn criticism from Congress and the Left while his daughter Sharmistha Mukherjee, who is a Delhi Congress spokesperson, had also tweeted against the visit. Those in the know of his visit, however, insisted that Mukherjee was no longer bound to seeing issues through a political or partisan prism as his active association with party politics ended after he became President in 2012.

The former President sought to rise beyond the political controversy that surrounded his visit to the RSS headquarters and gave a historical perspective of the different kingdoms and conquests of India over the years. “Throughout this period of 2,500 years of changing political fortunes and conquests, the 5,000-year-old civilisational continuity remained unbroken.

In fact, each conqueror and each foreign element has been absorbed to form a new synthesis and unity.”

He did not refer to the reservations some Congress and Left members expressed at his decision to visit the RSS headquarters and share the dais with Mohan Bhagwat.

‘Sangh is Sangh, Pranab is Pranab’

RSS Chief Mohan Bhagwat has dismissed all criticism about former President Pranab Mukherjee attending an event at the RSS headquarters and said his presence is a not a matter of     debate at all.

“There has been a tradition that we invite well-known people from various walks of life for our Tritiya Varsh event. We are only following this tradition. There is no meaning in the discussion that has happened this time.

Everyone in this country knows the personality of Pranab Mukherjee. We are grateful that we are able to learn something from him. How Pranabji was called and how he is coming is not a matter of debate. Sangh is Sangh, Pranab is Pranab. There have been many debates about Pranab Mukherjee attending the event but we do not consider anyone different from ourselves,” the RSS Chief said.