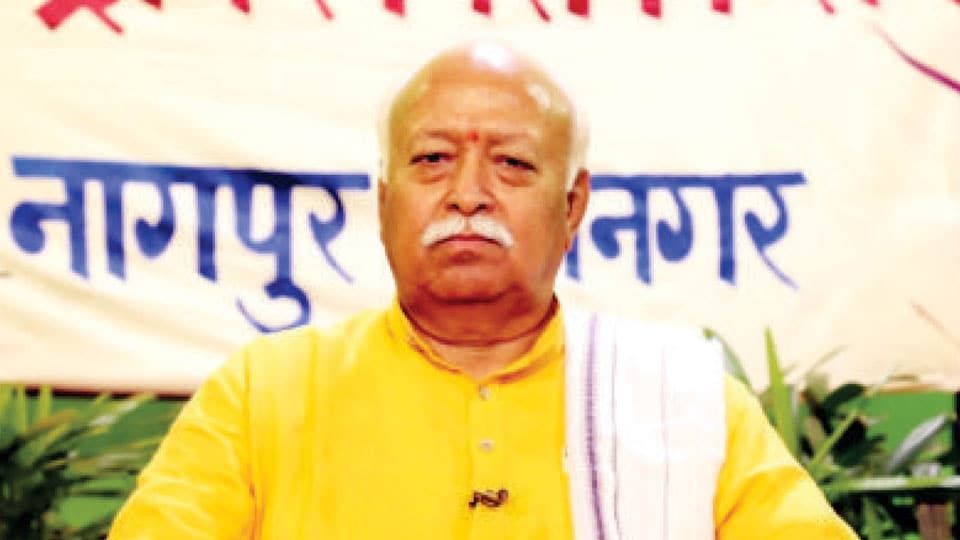 Positivity Unlimited: ‘With strong and positive mind, we can overcome Corona pandemic’

There is no denying the fact that the situation around us is very difficult. The Corona pandemic has swallowed the dear and near ones of many. There are black clouds of grief and sorrow hovering over the society. But there is a silver lining to these black clouds and this silver lining is the strength and positivity of our mind with which we can surely overcome this pandemic, said Rashtriya Swayamsevak Sangh (RSS) Sarsanghchalak Dr. Mohanrao Bhagwat.

He was delivering the concluding lecture in the five-day series “Hum Jitenge – Positivity Unlimited” organised by the Covid Response Team (CRT), Delhi, from May 11.

Dr. Bhagwat said that there is no denying the fact that the situation around us is very difficult. The pandemic has threatened the very existence of human race. However, we had faced many such situations in the past and had overcome them with our determination, commitment, and positive attitude. Viewed against those difficult challenges, the present pandemic is not that serious, and we can overcome this with the strength of our minds and positive attitude, he said.

Dr. Bhagwat exhorted the people to understand the seriousness of the situation and face it boldly. Whatever situation is there, we must fight with it the way we can, he said adding that the RSS Swayamsevaks are serving the society in whatever possible way they can to emerge victorious in this war against the virus. He said that if our mind gives in we will not win this war. To avoid this, we have to keep our mind strong by adopting various ways like Yoga, Pranayama, Suryanamaskar etc. We have to keep our body ‘Corona negative’ but mind positive to overcome the pandemic threat.

READ ALSO  POSITIVITY UNLIMITED: 'We will emerge victorious even from this pandemic'

In such trying times we have to show the unity of the society and stay away from mudslinging. We must help the needy sections of society by whatever way we can, Dr. Bhagwat said. He further said that the situation is not of despair and frustration, but to fight to win. We will not allow ourselves to be overtaken by this frightening situation.

He quoted the example of RSS Founder Dr. Keshav Baliram Hedgewar, who lost his parents on the same day in the Plague pandemic when he was barely in his teens. But he digested this shock and plunged himself to ameliorate the condition of the people of the nation. He developed a selfless love for the society that inspired him to dedicate his life for the well-being of the society. Such examples are our perennial sources of inspiration, he said.

We are believers in the life and death cycle. This cycle goes on endlessly and therefore, such pandemic-like threats do not deter or distract us from our mission to serve the society, he added.

Quoting Winston Churchill, who won the war against Germany during World War II, Dr. Bhagwat referred to some lines inscribed on the wall in Churchill’s office. The lines read: “Please understand that there is no pessimism. There is no place for defeat, they just do not exist.” With this positive attitude Briton won the war under Churchill’s leadership by defeating the enemy who was far superior, mighty, and well-equipped. The British accepted the threat as a challenge and defeated the enemy. Similarly, we also have to accept this Corona pandemic as a challenge. Once we do that, even if the third wave of the pandemic  strikes it will wither away.

READ ALSO  Positivity Unlimited: 'This is the time to express our gratitude to society and serve others'

Quoting the example of  ‘Samudra Manthan’ he said that emergence of valuable stones, and the terrible poison did not deter the process of churning the ocean till the nectar was obtained. We need such unshakable determination to win over the current pandemic threat, Dr. Bhagwat said. Showing unity of the society is of utmost importance at this hour of crisis, he said.

He also drew the attention of people towards the economy of our country. He said in the situation where people have lost their jobs, businesses collapsed and earnings affected, we should help them in whatever way we can. This is the litmus test of our courage. We must remember that ‘Success is not final; failure is not fatal; Courage to continue is the only thing that matters’, he concluded. ‘Hum Jitenge’ ‘We shall win’ this fight against Corona.