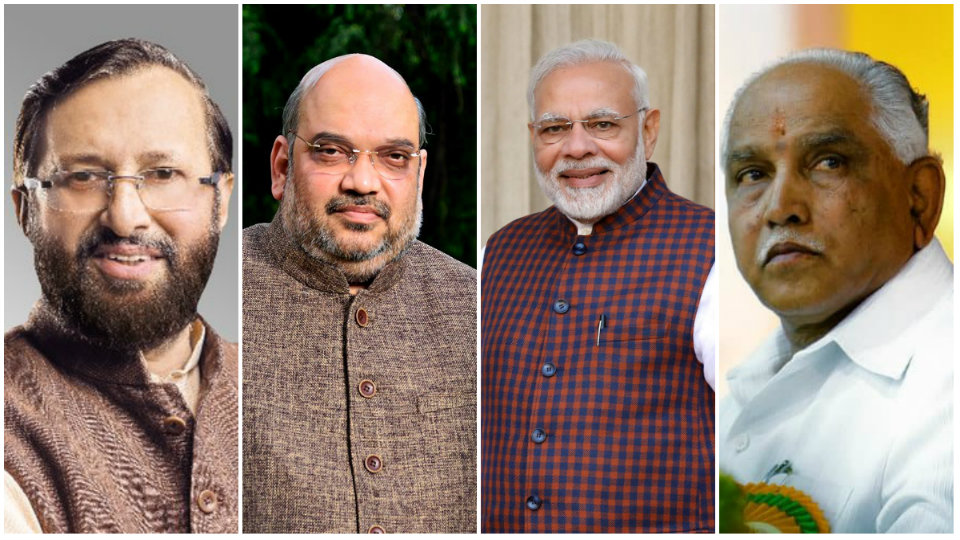 New Delhi:  Did BJP miss the services of leaders like Ram Madhav and Himanta Biswa Sarma in Karnataka?

In the wake of unceremonious exit from the corridors of power in Karnataka, a quick soul searching and analysis have already begun in the BJP camp and there is a sense that Union Minister Prakash Javadekar could be made the ‘fall guy’ as the party could have avoided the embarrassment of losing out in number game in the last moment.

“The sacrifice we made in the form of B.S. Yeddyurappa’s resignation could have carried more weight had we given the chance of government formation to the JD(S)-Congress combine in the first place itself,” a party leader said.

The blame could also go to B.S. Yeddyurappa as he reportedly insisted that requisite numbers can be managed. The fact of the matter is there was a fault line in ground assessment and probably the move to insist for formation of BJP government was guided by “over confidence”.

There is also a feeling that unlike the past, the Congress preparedness for post poll machinations was much organised and smooth than BJP’s as immediately after the exit polls, the top leadership of Congress got in touch with the JD(S) supremo and former Prime Minister H.D. Deve Gowda and enlisted the services of some prominent Third Front leaders including Sitaram Yechury to reach out to Deve Gowda.

According to sources, no less than UPA Chairperson Sonia Gandhi got in touch with Yechury and leaders like K. Chandrasekhar Rao (TRS) and Mayawati (BSP) to ensure that Deve Gowda is “assured well of the Congress sincerity” in extending unconditional support for Chief Ministership to JD(S).

Moreover by May 14, a galaxy of Congress leaders including Ghulam Nabi Azad, Ashok Gehlot and K.C. Venugopal were already camping in Bengaluru and keeping themselves informed at the ground zero.

On the other hand, the poll in-charge of BJP, Javadekar was in Delhi on counting day (May 15) and thus the quick reflex actions of the BJP — which was visible in States like Goa and Manipur — was somehow missing.

The BJP sources maintained Javadekar as poll in-charge had earlier handled Manipur elections in 2017 too, but in the North Eastern State, the job of trouble shooter was for the saffron party-led alliance was mostly piloted by Assam Finance Minister Himanta Biswa Sarma and the party General Secretary     Ram Madhav.

In fact, the absence of Madhav in the power game in Karnataka was a puzzle for many as he has in the past successfully handled BJP’s government formation in Jammu-Kashmir and also states like Nagaland.

According to BJP sources, there was possible lack of keenness to ensure the survival of “minority” government of Yeddyurappa as perhaps the party leaders knew about the limitation of getting support from MLAs from other parties.

In fact, the Prime Minister Narendra Modi not only skipped the oath taking ceremony of Yeddyurappa, but he also did not share his sentiment about the return of the BJP to power in the southern State on twitter. Curiously on May 17 morning, Modi spoke to Deve Gowda and conveyed him birthday wishes.

“Spoke to our former Prime Minister Shri HD Deve Gowda Ji and conveyed birthday wishes to him. I pray for his good health and long life,” he later tweeted.

BJP Chief Amit Shah, who camped himself for two months during the whirlwind election campaign in Karnataka, also stayed away from the swearing in.

In the ultimate a section of BJP leaders wonder how the party strategy was thwarted on every move both politically and legally.

The episode has definitely hit BJP’s high moral standing as media reports and social network were abuzz with allegations of BJP leaders getting caught while trying to offer bribe to the probable defectors from the JD(S) and  the Congress.