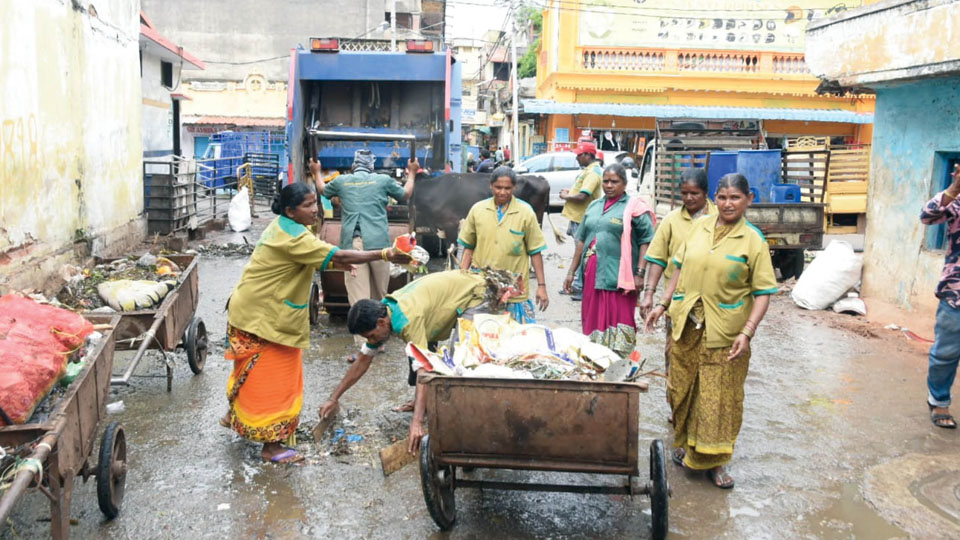 Mysore/Mysuru: Striking contract and outsourced Pourakarmikas, direct payment workers, door-to-door garbage collectors, garbage transport vehicle drivers and UGD workers, who were on an indefinite strike since July 1 seeking regularisation of their jobs and other demands, ended their strike yesterday.

They resumed their work from today and as rains hampered their work this morning, mounds of garbage which are piled up on road sides in city centre and across the city, are expected to be cleared by this evening.

The Pourakarmikas called off their stir following assurance from the State Government that it would look into their demands in three months. They said that they would wait for three months for the Chief Minister to meet their demands and then take a decision on future course of action.

There are 2,600 Pourakarmikas working for the Mysuru City Corporation (MCC) out of which only 530 are on MCC rolls and the remaining are on contract, getting direct payment from the MCC. Except for the 530 permanent workers, the rest of them were on strike which had disrupted civic works in the city resulting in heaps of garbage piling up on road sides in city centre and also in extensions.