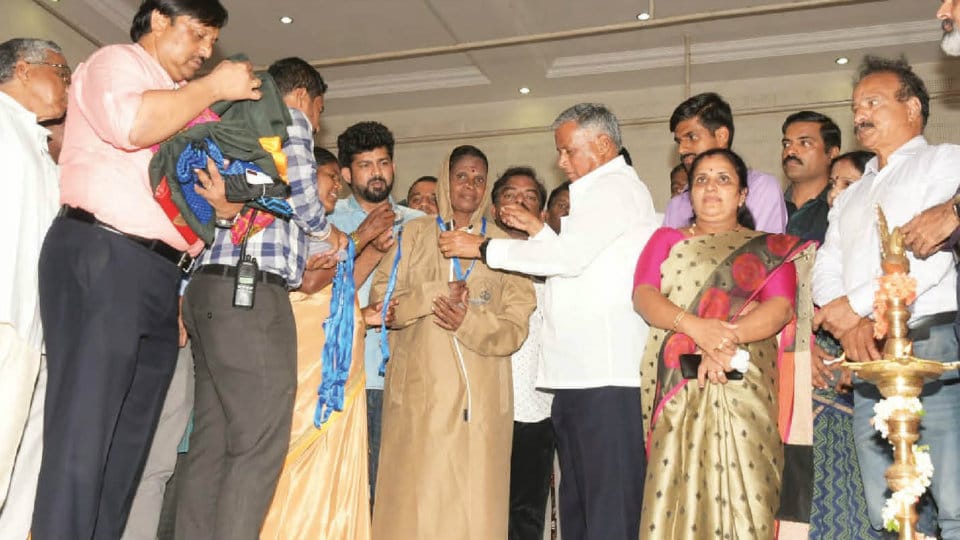 Mysuru: District Minister V. Somanna yesterday observed that Pourakarmikas have the responsibility of protecting the richness of the heritage city — Mysuru. Terming them as city’s pride, he said the civic workers should earn the love and affection of tourists by keeping the city clean. He was speaking at a programme organised by MCC to distribute facilities to Pourakarmikas at Rajendra Kalamandira here.

Maintaining that he would be grateful to Pourakarmikas for their role in Mysuru bagging the Cleanest City tag for two successive years, Somanna said that the MCC was planning to directly credit the salaries of contract Pourakarmikas to their bank accounts and this plan is likely to come into  effect in a month.

Stating that the MCC and the Government will be with Pourakarmikas, Somanna called upon them to educate their children and thus give them a better future.

On the occasion, the Minister distributed rain coats, ID cards and uniforms to the Pourakarmikas. He also released a poster brought out by the Dasara Swachhata Sub-Committee on the theme ‘Plastic-free Dasara.’