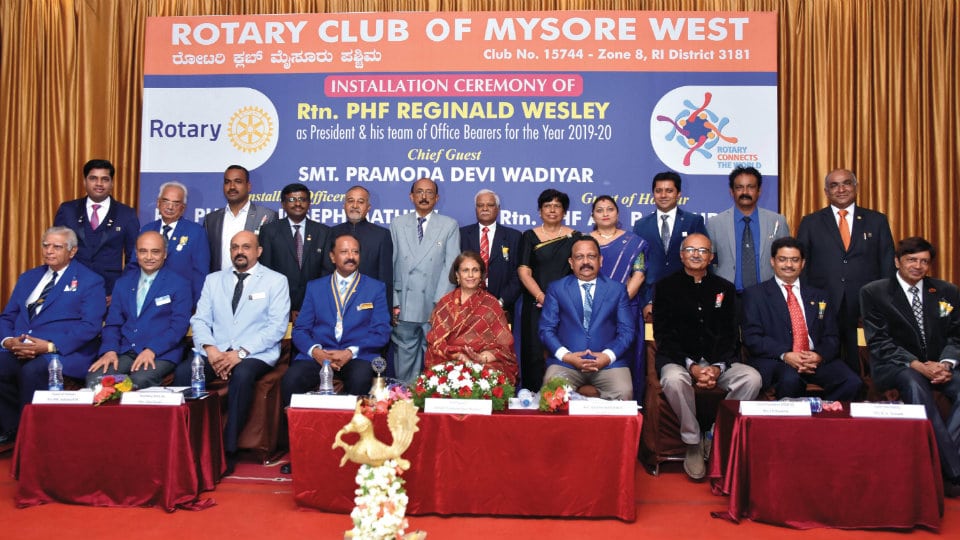 Mysuru: The Rotary Club of Mysore West, since its inception 46 years ago, has contributed many service projects to the society out of which the Rotary West Institute for Mother and Deaf Child and Save a Child Project with Kamakshi Hospital stands out besides the recent one it did at Madikeri for the flood victims are all very laudable, said Pramoda Devi Wadiyar of the erstwhile royal family.

She was speaking as the chief guest at the Installation Ceremony of the Rotary Club of Mysore West President Reginald Wesley and his team here yesterday at a private hotel and said that the Rotary West is always known for efficient execution of the projects and hoped that it would continue to do so in the future.

Pramoda Devi Wadiyar also thanked the Club for inducting her as Honorary Rotarian and assured that she would do whatever she could for the Club. She recalled her association with Reginald Wesley and his close ties with her late husband Srikantadatta Narasimharaja Wadiyar and recollected how both Reginald and Wadiyar and a few others had formed a Jazz band called Heartbreakers. “I do not know how many hearts they broke but I am sure they broke a few strings and drums in the bargain,” she said to peals of laughter.

Rotary Club of Mysore West, in association with Skanray Technologies, launched ‘Marali Vrithige’ project on the occasion. This unique project provides opportunities for the engineers who come from poor background, who do not get jobs equivalent to their degree, even after one year of passing out.

Skanray Technologies has come forward to train such engineering graduates and help them acquire skills for year. Then they would either get a placement in the company itself or the trainees could look for jobs elsewhere.

As part of the project, Skanray Technologies has contributed Rs.4.85 lakh and this cheque was handed over to the President Reginald Wesley.

The Club will likewise give a matching grant of Rs.4.85 lakh and from this amount, the trainees will be provided stipend during the training period, said Acting President J.P. Aiyanna.