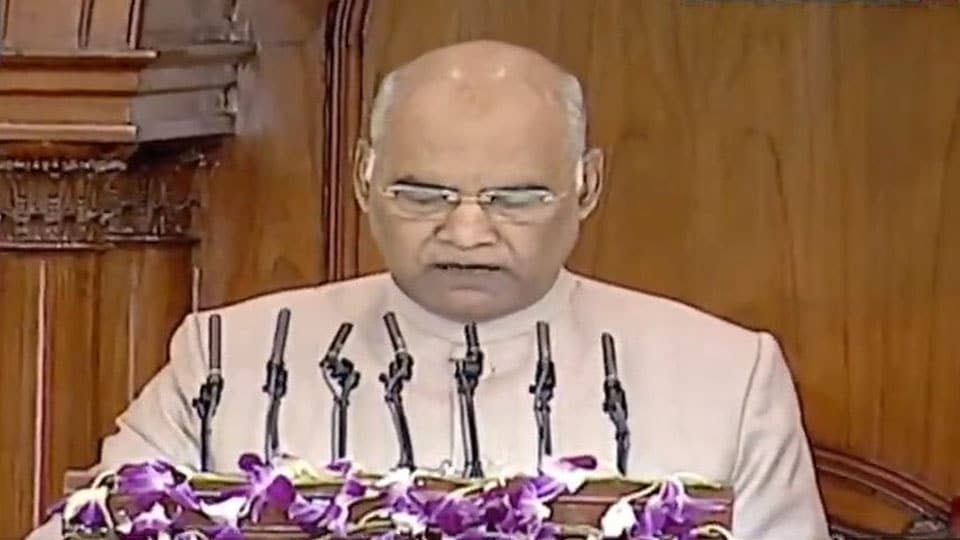 New Delhi: In his customary joint address to Parliament, President Ram Nath Kovind this morning outlined the NDA Government’s objectives for “New India.” Stating that the Government plans to make India a 5-trillion dollar economy by 2024, President Kovind in his address at the Central Hall of Parliament said, “My Government is moving ahead to create strong, secure and inclusive India.”

Adding that the world today is standing with India on issues of terrorism, Kovind said, “National security is paramount for my Government, surgical strike and Balakot air strike on terror camps have made India’s intentions clear. Declaration of Masood Azhar as a global terrorist is proof that the world is watching.” He also said that the Government plans to double the farmers’ income by 2022, to provide electricity for all and to ensure the empowerment of women.

Stating that a clear mandate has been given in favour of “sabka saath, sabka vikas,” Kovind congratulated all the MPs. “Everyone knows the situation before 2014. People of India voted to continue with India’s development journey that started in 2014.” He also thanked the voters for their participation and said the diverse backgrounds of the members will enrich the debate in Parliament. He also hoped that the Parliamentarians would work together for the development of the country.

The government is committed to women empowerment, President Kovind said. “Removing practices like ‘triple talaq’ and ‘nikah halala’ essential to give equality to women,” he said. “According the highest priority to women’s security, several effective steps have been initiated with the cooperation of the States. Penalties for crimes against women have been made harsher and the new penal provisions are being strictly enforced. The ‘Beti Bachao Beti Padhao’ campaign has brought down female foeticide and improved the sex ratio in many districts of the country. My Government is committed to make women equal stakeholders in the country’s development and prosperity,” Kovind said.

In the best interests of agriculturists, President Kovind said the Cabinet in its first meeting has decided to extend the benefits of Pradhan Mantri Kisan Samman Siddhi (PM-KISAN) to all the farmers across the country, regardless of the size of their landholding. Announced ahead of the Lok Sabha elections in the Interim Budget this February, the scheme provided Rs. 6,000 a year in income support — to be distributed in three instalments of Rs. 2,000 each every four months — to small and marginal farmers, who owned 2 hectares or less.

Large-scale investment has been made to strengthen rural India. To increase the productivity of the agriculture sector, another Rs. 25 lakh crore will be invested in the coming years. In order to double the farmers’ income by 2022, the government has hiked the MSP and introduced 100 per cent FDI in food processing industries, among other initiatives. Massive work is being carried for the ‘aspirational districts’ of the country, he added.

Adding that the government plans to make India a 5 trillion dollar economy, Kovind said, “India is now on the way to become the world’s 5th largest economy in terms of GDP. In ‘Ease of Doing Business’, India has leap-frogged 65 positions during the past 5 years, from a ranking of 142 in 2014 to 77. Now our goal is to be among the top 50 countries of the world. With the implementation of GST, the concept of ‘One country, One tax, One market’ has become a reality. Efforts to further simplify the GST will continue,” he added.