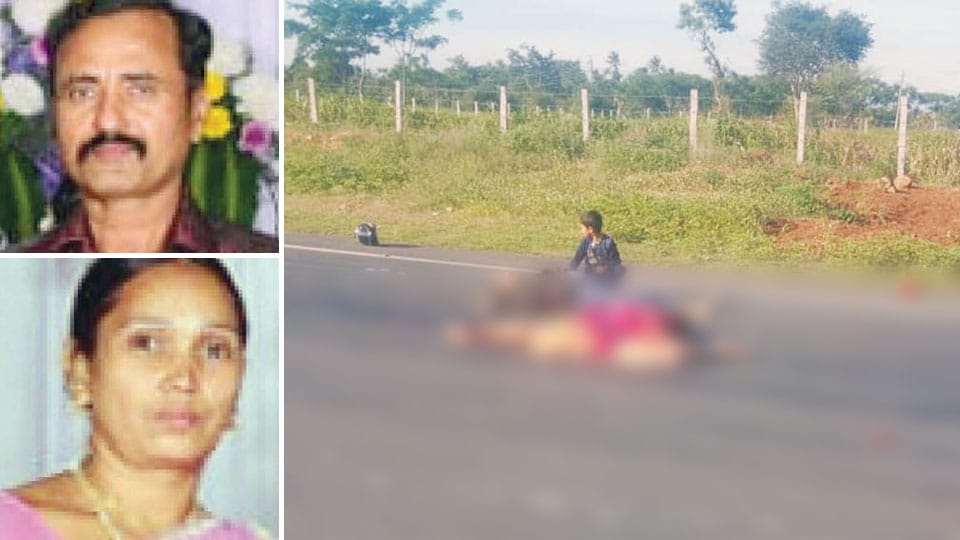 Chamarajanagar: Villagers of Muttige village here were witness to a heart-rending scene where a little boy was seen touching the dead body of his father while his mother’s body lay next to his father’s. Without realising that he had lost both his parents, the five-year-old child continued to touch his dad’s body in a vain attempt to wake him up.

Soon, villagers and the Police rushed to the spot and some villagers were in tears seeing the helpless situation of the boy. Though they tried their best to cajole the child, turning away his attention from the dead bodies, the child turned continuously at his dead parents pointing his hands towards them.

The incident occurred this morning near Muttige village. The child was accompanying his parents, 50-year-old Madesh and 35-year-old Mani who were on their bike. They were residents of Kagalwadi village.

The family was on their visit to Mysuru to attend a wedding. At Muttige, the boy told his parents that he wanted to relieve himself. Heeding to his son’s request, Madesh stopped his bike by the side of the road and lifted the boy from his bike and told him to go near a bush.

Madesh and Mani too got down from the bike. Moments later, a speeding tipper rammed against the couple as they waited for their son. The couple was killed on the spot. Soon, the child came to the spot after attending nature’s call and without realising what had happened, the little one sat down and tried to wake up his dad.

After the accident, the tipper driver tried to escape with his vehicle but villagers and other motorists gave a chase and blocked the tipper at a distance. However, the driver managed to flee after abandoning his vehicle. Chamarajanagar Traffic Police have registered a case.