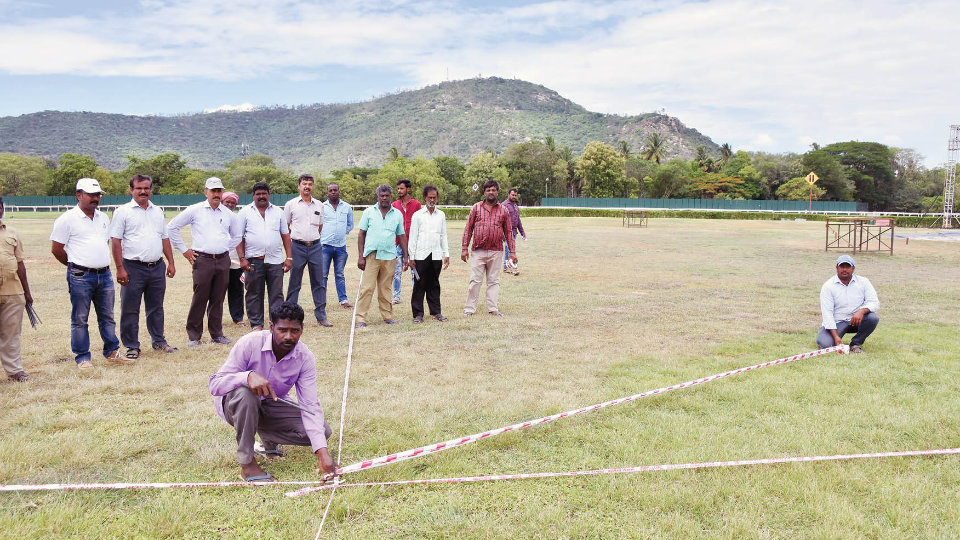 All set for Yoga Day at Mysore Race Club

Mysuru: The city is all set for the fifth edition of International Yoga Day as the sprawling Mysore Race Club (MRC) premises is getting ready to welcome yoga enthusiasts in huge numbers to the event organised by District Administration, MCC, Department of Tourism and Yoga Federation of Mysore.

In the blocks, small stages are being put up for instructors to give demo. There will also be two generators stationed and mikes and speakers at various places for yoga enthusiasts to hear to the directions of yoga masters.

In all, there are five gates from where the yoga enthusiasts can enter the ground. However, there is a separate entrance for VIPs at the rear side of the ground and the entrance is from the CAR Ground side. The other four entrances are from the Rana Pratap Circle side, Race Course Circle side, near the ticket counter side and also the main gate. KSRTC will start operating the buses from 4.30 am itself and people participating in the yoga can use this facility by purchasing tickets. The gates at MRC will open at 5 am. They will be picked up from various extensions and dropped back once the event is over.

Speaking to SOM here this morning, snake rescuer Snake Shyam said that he had done the combing operations at the Race Course from 6 am till 12 noon in every corner and niches of the ground including the drainages and found that there were no snakes.

It was a sorry sight to see the plight of Pourakarmikas whose hands and legs were bruised as they cleared the weeds and other growth around the sprawling Mysore Race Club premises.

They were deputed by the MCC to clean the grounds. As there were many thorny bushes, the thorns tore into their skins and they were seen bleeding as they were not provided any gloves but only machetes and brooms.